We are all too familiar with two masterpieces of architecture: the Blue Mosque and the Haghia Sofia. I have seen so many pictures of Haghia Sophia that perhaps it has lost its ‘wow’ factor. Sadly part of the interior is blocked off and in scaffolding. 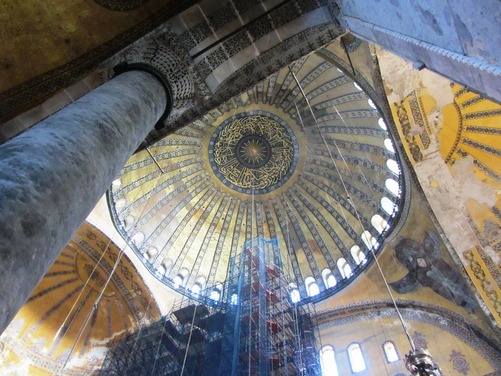 I think that colours my perception, added to the fact that its feeling of sanctity has been compromised due to being turned into a museum. Nevertheless you have to pinch yourself when you remember that it was built in the 6th century and is still the largest church in the world. The glittering mosaics are astonishing, and the massive, low-hung brass candelabras leave a lasting memory.

Strolling across the square between Haghia Sophia and the Blue Mosque, I think the sight of these two iconic buildings must be one of the most breath-robbing experiences in the world. Look to the left and you have the glorious Blue Mosque (the Sultan Ahmet Mosque), its six minarets reaching heavenward, creating a feeling of sublime perfection and balance. 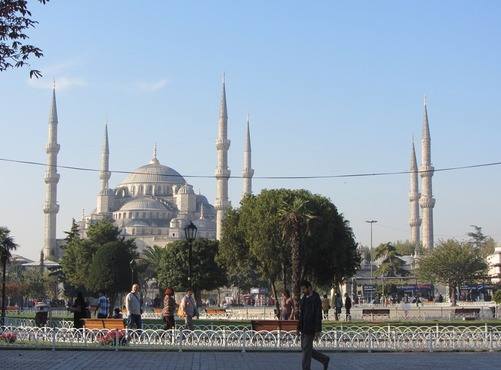 Look to the right, and you are overwhelmed by the solid power of Haghia Sophia. 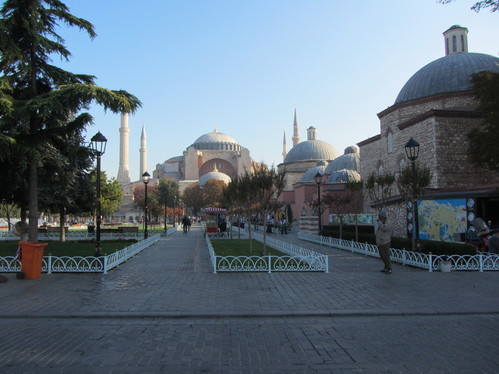 Some people say it’s not basically a beautiful building. I beg to differ. Okay, so it was undoubtedly improved by the addition of the four Ottoman minarets, but balanced with the Blue Mosque opposite, this is an area of architectural glory that few other cities can match. I could walk up and down here all day. Pity there’s so much else to see.

I have to visit the Blue Mosque twice since it is so crowded the first time that I feel nothing but a sense of disappointment. My second visit, earlier in the morning before the cruise ships disgorge their one-day sightseers, is much more successful. Beauty that confirms what the guidebooks say. But it’s not blue. The Iznik tiles and painted domes are a profusion of colours. I wonder if the blue originally referred to the outside, where the blue-grey stones contrast sharply with Haghia Sophia’s predominantly pinkish ones. 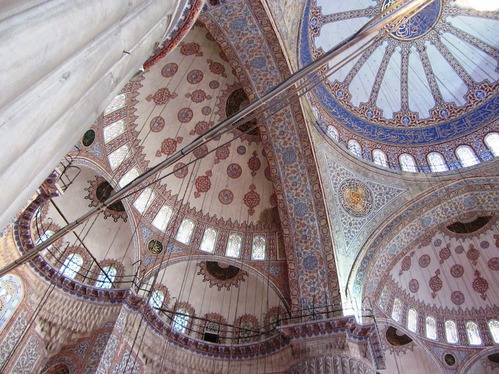 Three mosques in Istanbul make an even greater impression on me. The first is the New Mosque (actually 17th century) because it was the first of the ‘tiled’ mosques I entered, because it was not full of tourists and because it was commissioned by a woman – one of the powerful harem ladies. My first visit brings a lump to my throat. I stand entranced for many minutes. 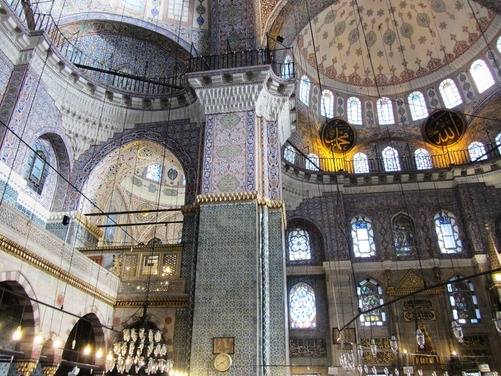 The second really is a new mosque, opened in 2009, the Sakirin Mosque in the Karacaahmet  cemetery across the Bosphorus in Üsküdar (Scutari) on the Asian side. This one was designed by a woman – at least, the interior was. A candelabra of glass water droplets cascade from the ceiling in a glorious array, reflecting the spidery patterns of windows and balustrades and the simplicity of the circular, cerulean mihrab. It’s beautiful – what more is there to say? 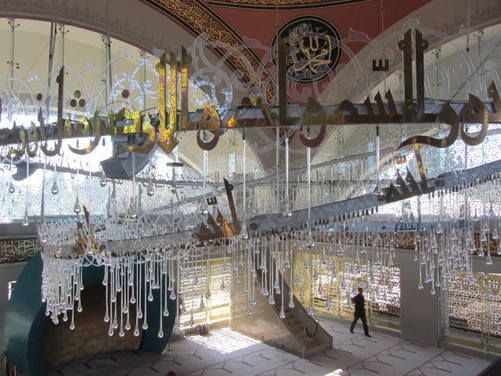 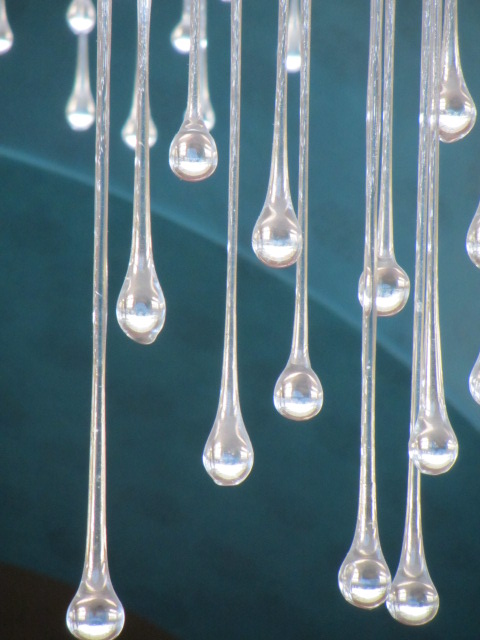 Lastly a mosque built by a reputed scoundrel of a wealthy nobleman in the 16th century. I set out on my own, since it is our last day, and some of the group are suffering from cultural exhaustion, as we have spent the morning ‘doing’ museums. They declare that they are ‘mosqued out’ and do not wish to accompany me. Instead they wish to ‘waste the next four hours’ and ‘ride the tram to the end of the line, get off and have a cup of tea’, (which we all know is a thinly-disguised euphemism for something stronger)

I plunge into the Spice Bazaar, wondering if I’ll ever find my way out, until I spot an old sign at the bottom of some stone steps, indicating the Rüstem Pasa Mosque. I head upwards in some trepidation.. It is dark and isolated here. Am I being foolhardy? I emerge onto a charming, narrow courtyard adorned with shrubs in tubs and find myself in front of the mosque, which reputedly houses the best and most profuse selection of Iznik tiles of all the mosques in Istanbul. 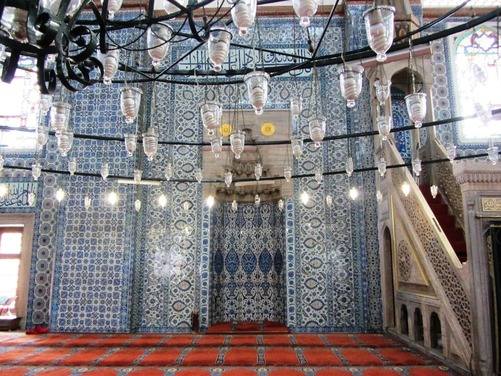 Surrounded by a ceramic flower-garden of sumptuous splendour, I can only agree. 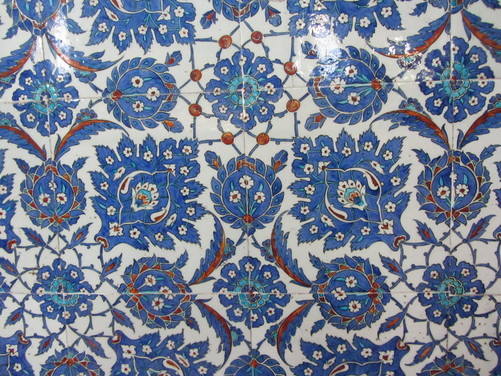