Never one to turn down a potentially exciting new experience, I decided to join my sister and brother-in-law for a four night stay at a Thalasso (ie sea water) spa hotel in Port Camargue, southern France.

I had never actually taken a ‘cure’ before, The nearest I’d got to it was a six- week ayurvedic massage course in Bangalore and several drop-ins at various spa centres in Germany, simply to swim, sit in the Jacuzzi and sweat it out in the sauna. The Bangalore experience, since it was ‘hands on’ and slimy, was probably nearer my expectations than the sedate German pool sessions (during my teaching days, usually accompanied by a party of Godalming or Cranleigh  school children, who I had felt needed educating in this peculiar aspect of German culture) .

The Hotel des Bains is a Mercure hotel set in the uninviting surroundings of a windswept beach, and vast estates of grotesque, crumbling 1960s apartments clustered down the various inlets of a huge artificial marina. Every apartment had a mooring and every mooring was crammed with several sleek yachts or motorboats. Strangely though, hardly a human was to be seen. It was like the deserted set of a time-warp movie, the modern boats contrasting sharply with the bunker-like buildings. 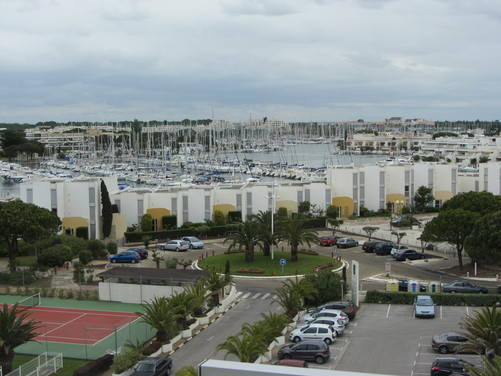 The hotel was expensive and shabby, paint peeling from weather-beaten walls. The architecture was typically mid 20th century glass-and-concrete ugly. It was, however surprisingly comfortable inside, with nice rooms, a restaurant with a superb view and excellent food. What’s more, wi-fi was free.  It’s being closed and refurbished later this year though quite how they propose to improve the outside beats me.  The weather didn’t flatter it – howling gales and rain for three days is not what you’d expect in the south of France in May. But this year, anything’s possible. 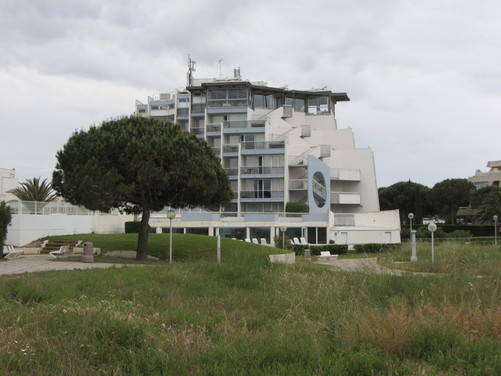 The grandly-named ‘Institut Thalazur’ (which appears to be another name for Thalasso) is on the ground floor. I had signed up for four sessions – three morning and one afternoon, each consisting of 4 ‘soins’ (treatments) lasting between ten minutes and half an hour.  Apart from a few in the piscine,  the soins take place in one of some 20+ cabines. You are given your schedule for the week with the time and the cabine number for each soin, and you move from one to the next, often with time in between to rest on one of the sunbeds in the relaxation room by the treatment pool.  My best investment before I left home was a waterproof jacket for my Kindle, which meant  I could carry it around with me in my  free ‘Institut Thalazur’ bag. You’re also given a free pair of plastic sandals, and a fresh daily towel and dressing gown – which you  have to return at the end of your stay on pain of a 70 Euro fine.

In order to  enthuse you to have a go at thalasso, the following are the soins I was allocated – not having any idea about any of them, I decided to go with the flow and just accept what I was offered. My sis and b-i-l, old hands at thalasso, have their favourites so picked and chose their own.

Douche á Jet1 –The assistant literally hoses you down with a high pressure hose. She starts with your feet and works up. I felt like one of the ancient Marwari stallions I’d seen being washed on the Maharana of Udaipur’s stud farm in Rajasthan. Though I guess I wouldn’t have felt quite so daft if I’d been a horse.

Bain aux Cristaux Marins – a Jacuzzi tub for one, with sea water and some unidentified crystals thrown in. High pressure jets squirt you under the water in sequence, starting with the toes and working up to the shoulders with some interesting inbetweens.  Note to myself – remember to wear the other swimsuit next time as this one blows up like a balloon when the jets are turned on and I spent the whole 20 minutes fighting it and trying to punch it back down under the water. Apart from this little hitch the experience is very soothing till you try to get out. Some of the female assistants desperately need a course on customer care. They tend to dump you in, switch you on and then desert you. You’re left to make a graceful (or in my case otherwise) exit on your own. If you’re not quick enough all the water automatically drains away and the whole tub (including  you)  is sprayed with jets of some fiendish disinfectant.

I was fine getting to my feet once I’d worked out that it’s best to roll over onto your hands and knees first. But the actual problem of getting out over the high side and landing safely on the steps down to the floor was like escaping from Alcatraz.

Soin Dynamique marin: this is in the indoor sea water pool and sure is dynamique. Basically very vigorous pool exercises with flippers on your hands. My b-i-l approaches this like a 100 m sprinter whereas the rest of us in the class (usually 3 or 4 women) take a more leisurely approach. The instructress keeps a concerned eye on b-i-l in case his enthusiasm gets the better of him and he keels over like an old dog-fox in the mating season.

Envelope á hibiscus: yes they really do smear icy cold hibiscus oil (so they say) all over you and seal you into a kind of space suit oven. Then they turn on the heat and  leave you to cook. Not sure what the point is or what it has to do with sea water,  is but it’s a nice, if somewhat weird, respite after all the water antics.

Jet Sous Marin 1: this was great. The far end of the pool has a series of underwater jets and you do exercises while you’re trying not to be swept away by the pressure of the jet. I happened to have the instructor all to myself the first time so she could pile on the pressure (in every sense). It’s jolly good for my French too. Basically, understand or drown.  Afterwards she let me stay in the jet area for another 10 minutes so that I could practice tsunami survival tactics.

Hydrojet 1: don’t do this if you get seasick. You lie on a waterbed and get machine-massaged. It’s like having a herd of little upside-down elephants tramping up and down your body. It’s the sort of thing that you feel must be doing you good though I’m not sure that any of it is really. But it feels great. And afterwards it’s fun to spend a moment our two rocking yourself gently on the invisible water before the assistant decides to return to see if you’ve been sick yet.

Pressotherapie: this is a load of humbug that every self-respecting French person simply swears by. ‘C’est pour le drainage’, the assistant announces with a totally straight face, Thankfully my sister had told me about it or I’d have had a few hairy moments thinking ‘le drainage’ could only be an enema.  It isn’t, but it’s just as daft. They smear some other unction onto your legs, wrap them up in bin bags and then zip them into some strange inflatable trousers and boots before wrapping the whole of you into another layer of rubber-like material to make sure that resistance is futile. Then they flick a switch and disappear sharpish. You are left lying on the slab with your assortment of rubberised gear expanding and contacting up and down your legs. Meanwhile the oily substance can’t decide whether it’s freezing or burning your legs to cinders. This goes on for around 20 minutes  until they come back to see if you’ve been sufficiently tenderised.

Bain á Gelée d’algues: another of those jacuzzi things – this time with some smelly algae. Too late I realised I was once again wearing the inflating swimsuit. The bain is lovely except that all the time you are wondering how you’re going to get out. I spent the time devising a method. Once up, swing one leg over the side hopefully landing on the steps, then sit on the side of the tub as if on a horse and swing over the other leg, keeping fingers crossed that you don’t slip back into the rapidly emptying tub, or miss the step and shoot out onto the floor several feet below.

Affusion 1: this is horrible and strictly to be avoided. You lie on your stomach with your face through the centre of an inflated rubber ring and they rain sea water down onto your back for around 15 minutes. You can’t open your eyes because the sea water stings them, it runs down your face and you can’t brush it off because if you lift your head you are putting your face in the deluge and your hands aren’t long enough to reach round the bed and up underneath through the hole.  I’m sure this is what they use as water torture in dubious foreign prisons (and possibly at Guildford police station in the 80s).

Douche sous marine: another high tub. This time a Tahitian woman physically massages you with under water jets. Hard work having all the while to keep up a non-stop conversation in French for the duration although the assistant was very sweet. I felt exhausted by the chat instead of relaxed by the douche.

Envelope algues laminaires: a really smelly one this. You get covered in slimy dark grey algae and zipped into a rubber duvet then left to stew slowly. Apparently another form of drainage I was told when I actually had the temerity to ask what on earth they were doing to me. Goodness knows what they were draining this time. I had hoped it would turn out to be some miraculous form of liposuction and half my body would have drained away when they unzipped me. No such luck. It was still all there, covered with stinky algae.  I had to shower thoroughly before I entered the lovely pool for another session of soin dynamique, which, thankfully, wasn’t quite as dynamique as on the first day, though my b-i-l  managed to turn it into an act of personal dynamism. This instructress wasn’t as aggressive – less of the ‘Plus vite! Plus vite!’ and the arm exercises were with board rubbers instead of flippers.

Envelope á poudre de Coto. Sis flippantly suggested this might be something to do with cotton. She was right. They plaster you with hot ‘creamed cotton’, wrap you in cling film, then  zip you back into the usual straight jacket affair and leave you to bake. At the end of 20 minutes they rescue you, by which time the creamed cotton has baked into a layer of plastery powder. No idea what the purpose is – apparently it’s good for the skin.

There are several other types of soins and modelages (massage), which I didn’t get a chance to try. Do I feel invigorated? Not really, just exhausted. I’m now recuperating for a few days at my sister’s house in Aigues Mortes.  I’ll get back to you in a couple of weeks to let you know whether there have been any long-term improvements, though judging by the cries of horror coming from my b-i-l when he stood on his bathroom scales, I would hazard a guess that any health benefits have been more than negated by the effects of the excellent menu and good wine at the hotel! I have resisted all invitations to weigh myself on my sister’s scales. I’ll put off the evil moment till I get home.