We woke up on our first full day in Sigiriya to the pitter-patter of… rain! All thoughts of climbing the 370 metre rock had to be put on hold – in the hope that the weather tomorrow would prove to be friendlier.

Not to worry, I told the others. We can just switch around the days and go to Polunnaruwa today instead.

Upali was horrified. You will be climbing up to the Dambulla Cave Temples on Day 3. You can’t do the Sigiriya climb the day before that, he insisted. It would mean two steep climbs on consecutive days. Impossible.

Nonsense, we assured him, affronted by this suggestion of frailty, and determined to prove him wrong.  And besides, I added. I’ve done them both before. It’s perfectly manageable. Upali looked askance but was too polite to remind me that that was in 1996 and the years since then may have ever so slightly reduced my stamina. Reluctantly he agreed to the change in plan and we headed off to Polonnawura after breakfast.

It took around an hour to get there. Once again our journey was prolonged by irresistible bird-spotting opportunities, beautiful views and ancient tanks. 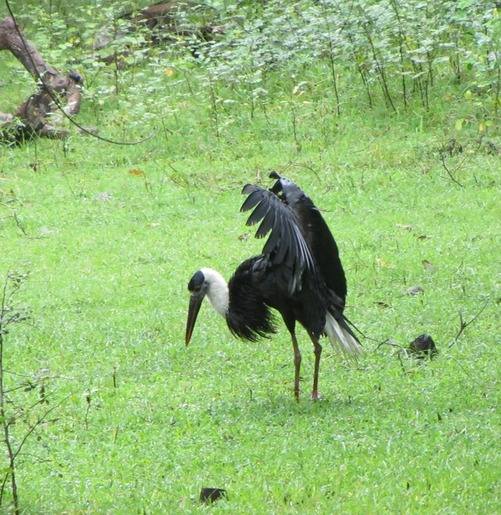 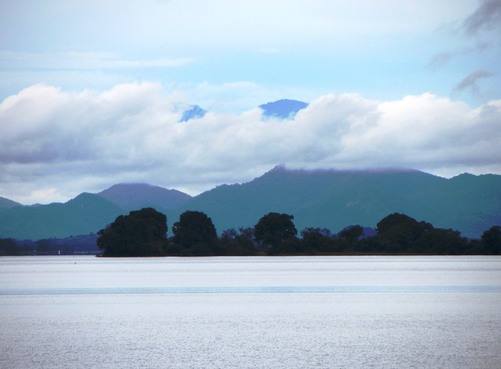 By the time we arrived in Polonnaruwa the rain had eased. In any case, our first port of call was the small, but excellent museum, which gave us a glimpse of the city’s history. Frustratingly, photography is forbidden. I headed for the museum bookshop to purchase a catalogue. There wasn’t one, not even a leaflet, at least nothing in a European language. You can’t photograph anything and you can’t read up about the exhibits, or see them in a book. How are you meant to remember everything? And what an opportunity for some entrepreneurial art historian to sweet talk the authorities and produce a guide to this fascinating museum.  If you’re reading this, Polonnaruwa Museum, I’m available.

As I hurried through the museum to rejoin the others, I heard someone call out my name. I turned and came face to face with a fellow- member of our local twinning committee back in UK. One of those surreal moments.  And as one does in these encounters, I blurted out the world’s silliest question. ‘What are you doing here?’ To which she responded with the answer I deserved.  ‘Same as you, I suppose.’

As well as the ubiquitous Buddhist exhibits the museum had a room dedicated to the city’s Brahminical  origins. In 993 CE the great Tamil ruler Rajaraja 1 of Thanjavur, conquered and destroyed Anuradhapura, setting up a new seat of power at Polonnaruwa. So for the first 100 years or so, this was a Hindu city and bore the unmistakable hallmarks of Chola art. The Cholas were eventually defeated by local ruler King Vijayabahu I in 1070, who made Polonnaruwa his capital.

Unlike Anuradhapura, Polonnaruwa was not in the thick of the recent civil war, so the infrastructure for dealing with tourists is slightly more sophisticated.  Upali had no problems in finding us a guide, a cheerful friend of his - no charge… you can give a tip at the end if you like (pull the other one…).  He was as knowledgeable about ornithology as he was about history. In fact he told us that his idea of heaven would be to lead a bird-watching tour of the island.

We jumped into the van and headed off to the Potgul Vihara. Vihara means ‘monastery’ and this monastery was our introduction to the ruler Parakramabahu the Great (1153-1186), during whose reign many of the best-known structures in Polonnaruwa were erected.  A carved figure as you walk onto the site is said to represent the ruler or possibly one of the ancient Buddhist sages.   The object in the man’s hand may be a palm leaf manuscript.  This would be appropriate for the site, where there is also a ruined library. 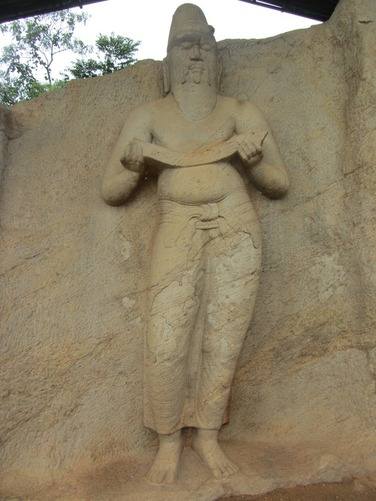 As always the internet is a treasure chest of useful (and not so useful) information. Here are the words of wisdom from one Sri Lankan website:

‘Potgul Vihara is also known as the ‘Library Monastery’. Its buildings are grouped on terraces around a central square terrace containing the principal monument, circular shrine or library for scared books.’

Enough said! This is where the scared books were kept: 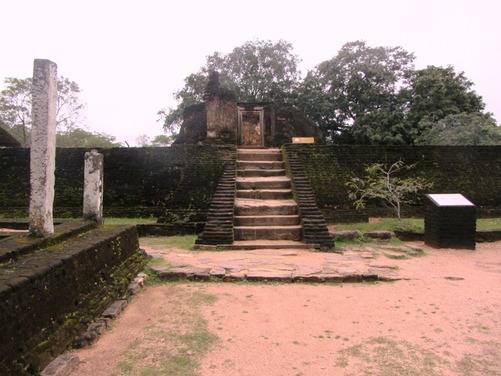 Back into the van (it’s a big area – though smaller than Anuradhapura) and on to the Royal Palace - what remains of it. Even the ruins are impressive. Originally seven storeys high,   it was also built by Parakramabahu the Great. You can still see sockets in the brickwork that took wooden beams. According to the ancient epic poem Mahavamsa the palace had had one thousand rooms. It was surrounded by rooms for rituals, entertainment and palace servants. Eventually the palace probably burnt down. 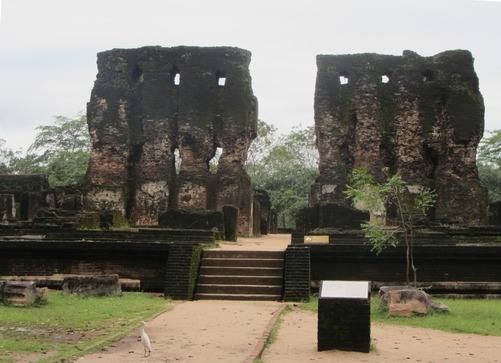 Of course Parakramabahu the Great and his royal entourage had to have a purpose-built bath – the hoypoloi could use the village tanks if they absolutely had to wash.  And what a royal bath it was! No stinting on luxury. The Kumara Pokuna, as they now call it, was an architectural masterpiece, designed to get water from nearby watercourse.  It also has outlets for draining used water. Nearby pillars suggest that there may even have been a changing room. 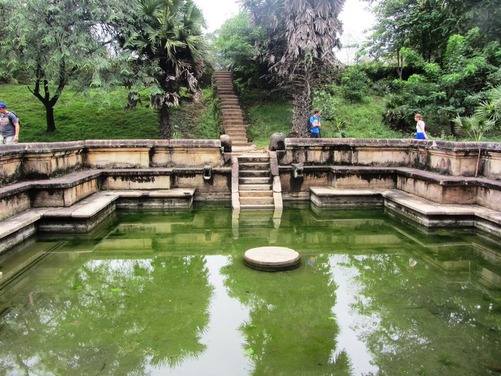 One of the two best known groups of wonders at Polonnaruwa is known under the collective title of ‘The Quadrangle’, where some of the most spectacular constructions are grouped.  Most of them were either shrines for the tooth relic or related to its worship. The Buddha’s tooth is Sri Lanka’s most sacred relic and has been housed at various sites on the island according to the whims of the ruler at the time. It is currently in Kandy.

The first thing I noticed in the Quadrangle was a large slab totally covered with inscriptions and with a lovely carving of Gajalaxmi (Laxmi being lustrated by elephants) at one end. Known as the Gal Pota, or stone book, it dates from the reign of Nissankamalla (1187-1196). It is almost nine metres long, one and a half metres wide and weighs twenty-five tonnes.  Notably the inscription tells us that it was dragged (presumably by elephant power) from Mihintale , 100 kilometres away. The ‘book’ describes the heroic and altruistic deeds of the king and also his genealogy.  Originally the letters were gilded with molten iron. 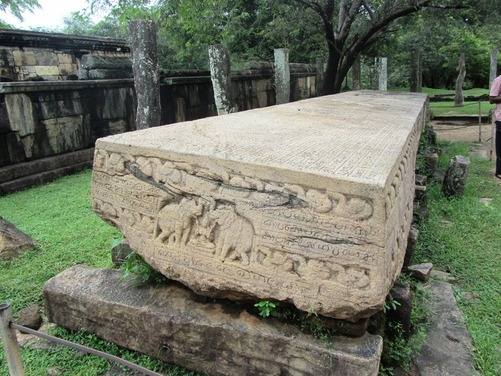 One of the great buildings on the Quadrangle is the Hatadage - the temple of the tooth. Another of Nissankamalla’s great works, he had it constructed (so they say) in hata (60) hours.  It had two storeys – the tooth was enshrined on the top floor. Nobody else seemed to want to wander into the ruins – bare feet hurt on pebbly ground, especially after it’s been raining. But I couldn’t resist.  It’s a very enigmatic place, with tantalising glimpses of a standing stone Buddha at the end of an avenue of gateways. I made my painful way along and the vista opened out into a great hall with two seated Buddhas, one headless, flanking the central standing one. 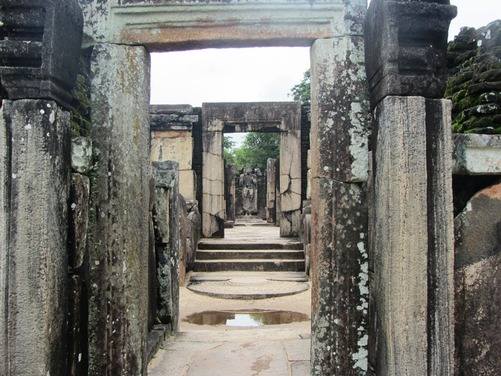 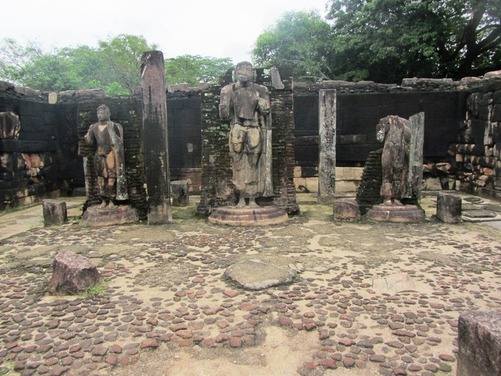 Turning back to admire the view towards the exit, you find you are looking out at another, even greater, construction from this era – the Vadatage.  This may originally have been built by Parakramabahu and may also once have housed the tooth but it was extended and restored by Nissankamalla.  Perched on top of two circular terraces, there is little left of the central shrine except ruins of the circular brick walls. 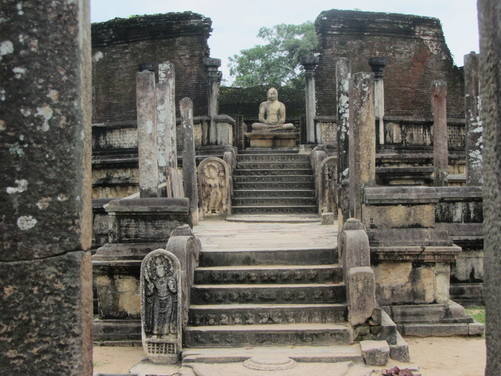 The shrine is guarded at all four compass points by Buddhas , some damaged, some restored, seated in ‘samedhi’ (meditation) pose. Flights of steps on each terrace lead up to each of these Buddha figures. It’s thought that the shrine roof may have been tiled over wooden beams. Each flight is flanked by  guard-stones of naga (snake) deities and moonstones are positioned against the bottom step.  These are the best-known moonstones in Polonnaruwa, though not as famous as the much older ones at Anuradhapura.   It would be easy to spend a day wandering around these ruins. At times simply sitting and soaking in the atmosphere and the wonderful vistas at each turn. Truly a place of peace. Even the monkeys hear and speak no evil, though I'm not sure what they're seeing. 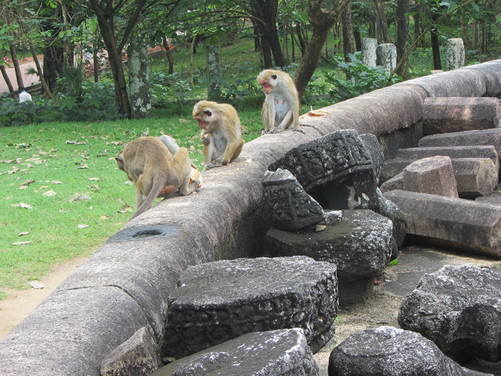 There is, however, one other site in Polonnaruwa that rivals the Quadrangle.  The carvings of the Gal Vihara are not only among the most iconic images in Sri Lanka, they are instantly recognisable all over the world.  The three famous Buddha figures in streaked white and grey granite were also created during the reign of Parakramabahu the Great.

The images are carved from a granite escarpment, more or less in a straight line, with a fourth, smaller seated Buddha tucked away in a cave beside them. If you go right up to this image and look carefully inside the cave entrance you will be able to make out the remains of some fine murals.

The large seated Buddha is in samedhi position, the seven metre tall standing Buddha meditating with crossed arms, and the last one is fourteen metres long  in parinirvana (an enlightened being on the verge of death). 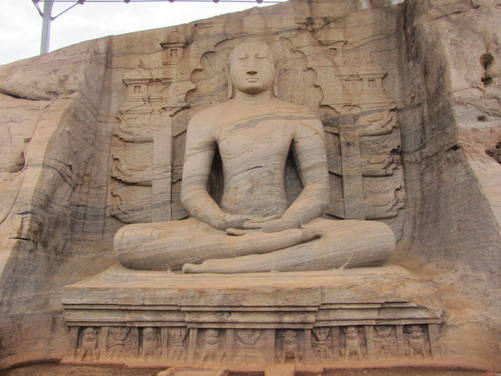 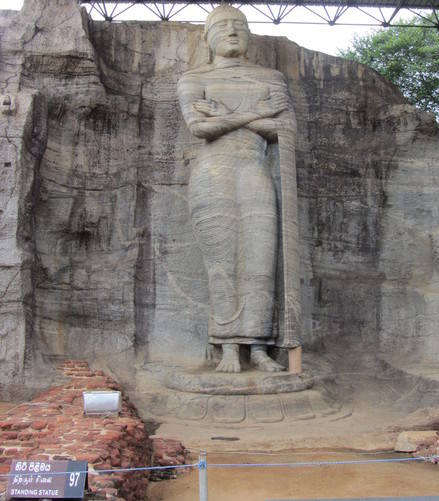 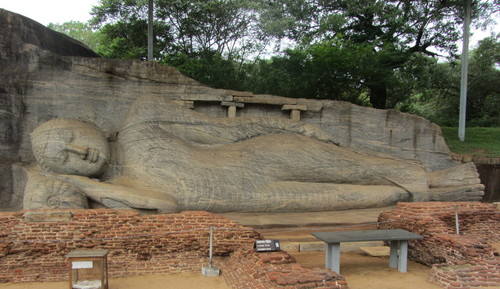 If you look closely you will see holes in the granite at the sides of each carving. These were to carry wooden beams and are evidence that a separate image house used to exist for each statue.

Without exaggeration these are undoubtedly three of the most beautiful carved Buddhas to be found anywhere in the world.  If you forget everything else about your visit to the ancient capital, you will remember these. I speak from personal experience.

Before we left, we visited two more of the many Polonnaruwa sites.  These were a pilgrimage for me. The first, the Lankatilaka, another shrine started in the reign of  Parakramabahu and renovated by Vijayabahu IV (1270-72) was, apart from the Gal Vihara, the only part of Polonnaruwa that I remembered years after my first visit in 1969. In fact somewhere there is a photographic slide of a very young me standing at the foot of the massive, headless brick and stucco Buddha that dominates the shrine.  You can still see remnants of paintings on the seventeen metre high walls. 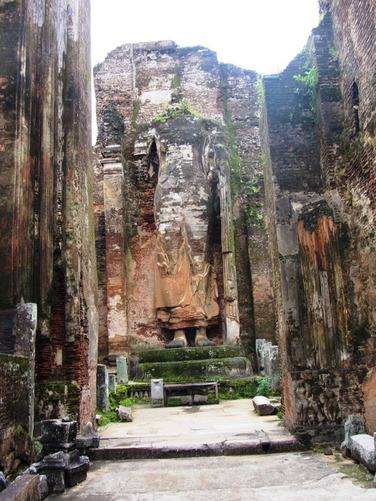 By the time we headed for our last port of call in the afternoon we were all dragging our feet. We’d forgotten about lunch. Light relief from intensive cultural sightseeing had been a pause for some coconut water – guaranteed to refresh flagging limbs and over-exercised minds -   and our cheerful guide’s enthusiastic bird-spotting diversions, which we all greeted with equal enthusiasm. 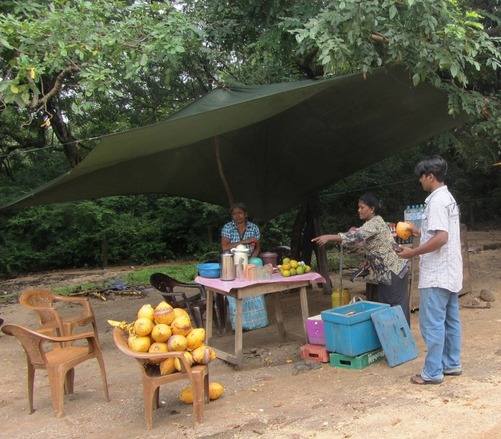 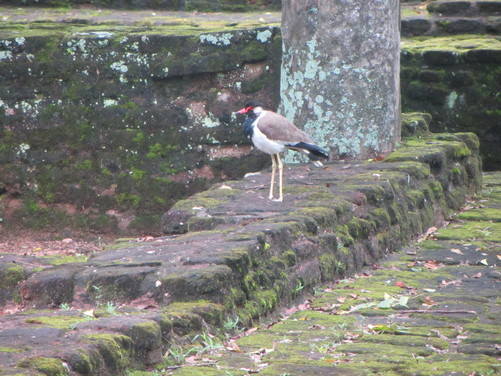 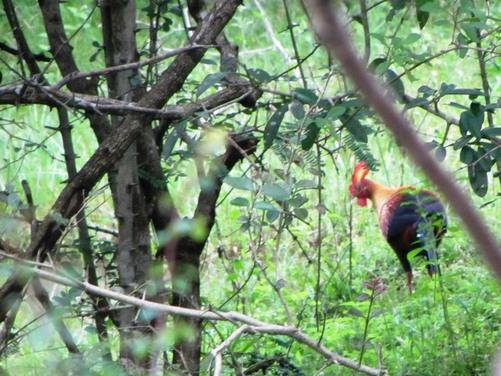 So my companions welcomed my insistence on seeing the ‘lotus pond’ before we drove back to Sigiriya, all, as they confessed later, looking forward to a few moments’ respite beside a lotus-covered lake.  They were slightly nonplussed, therefore, when they were confronted by this, another of Parakramabahu’s masterpieces. But they had to admit, it was beautiful. 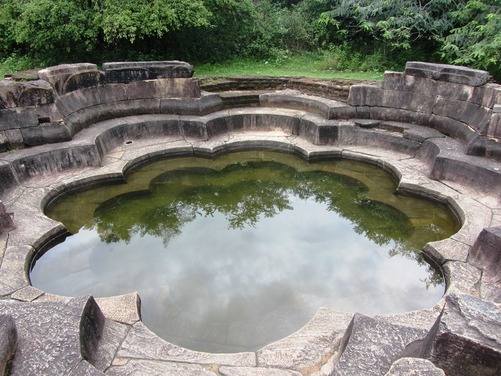 By the time we got back to Sigiriya we were too tired to do anything except stumble into the restaurant and gorge ourselves on yet another delicious Sri Lankan buffet and contemplate the thought of climbing the rock next day.