When I asked the tour company to put Trincomalee on the itinerary they assumed that our interest lay in the beach resorts, since this is why most tourists apparently visit the area. When I realised that the Nilaveli Beach Resort was, in fact, some distance from the town (16 kilometres of poor road) I was none too happy. However, once we’d visited the town, it was obvious that we would have been hard-pushed to find a decent hotel there. So I think we had the best of both worlds. Or would have had, if the weather had been more cooperative.

We set out for Trinco from the resort at 8 am.  This had not suited me initially at all. I would have preferred another half-hour’s sleep after the long journey of the previous day, but I was outvoted by more dogged group members…

In the end it was a good thing, because, by lunch-time, any sight-seeing would have been rendered impossible by the return of the RAIN.

First stop in Trinco was at a supermarket. We all had different pressing needs. Two of the group were hankering after Arrack, having been introduced to it and promptly fallen in love with it in Negombo, thereafter feeling a meal was incomplete without a glass of this excellent coconut-flower spirit to round it off. Now they wanted to extend the experience to a night cap in their room. The other member of our party, who cannily travels with a suitcase full of English biscuits in case the local food is too challenging, or simply to supplement the meals with something comfortingly familiar, felt a pressing need to replenish her rapidly depleting stock.

My own shopping needs involved a request from a friend back home and a chain for my sunglasses, as my chain had fallen to pieces. It’s quite impossible to take photographs wearing sunglasses and it’s much easier to rid yourself of them if you can dangle them round your neck.  The friend had requested something called Samahan Herbal Tea, which she swears wards of colds and flu if you take it at the first sign.

Our shopping spree was only marginally successful – the supermarket had a pleasing range of biscuits but no arrack, never heard of the tea, and -surprise, surprise – no spectacle chains. However, a little further along the road as we headed out to Fort Frederick, we came across a rather smart optical centre. Not only did they have a nice choice of chains at very low prices but they also had a clean, western style toilet...

Fort Frederick was built by the Portuguese, taken over and extended by the Dutch (is this beginning to sound familiar?) and eventually captured permanently (until independence in 1948) by the British in 1795. Thus Trincomalee became England's first ‘possession’ in Sri Lanka, then called Ceylon.

The importance of Trinco lies in its deep water harbour, one of the biggest in the world. It has seen a succession of overlords including the Cholas, the Danes and of course those ubiquitous colonialists, the Portuguese, Dutch and British. It was an important port for trading throughout the centuries and even Marco Polo paid a visit. After the fall of Singapore in the Second World War, Trincomalee became the base of the Royal Navy’s  Eastern Fleet.

Now it houses the Sri Lankan navy, so we weren’t allowed anywhere near it. That’s what we were told by Upali  after he had consulted local wisdom while we were in the supermarket. We had to accept this, though if the weather had been more accommodating later on, I might have asked him to test out this information by seeing how close we could get, though I sensed some reluctance to put himself in the firing line, so to speak.  As it was it was a great disappointment.

We headed out to the other reason for Trinco’s fame.  On a small peninsula between the inner and outer harbours, at the end of a causeway known as ‘Dockyard Road’ lies 130m high Swami Rock.  The views across the bay and down the coastline were quite spectacular. 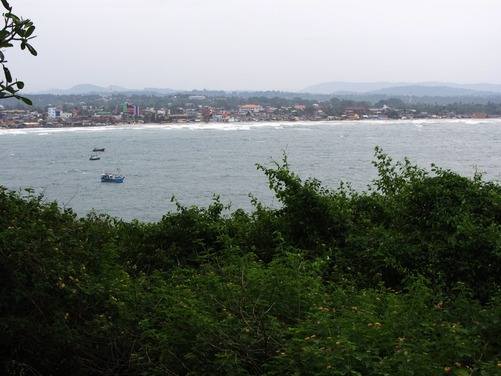 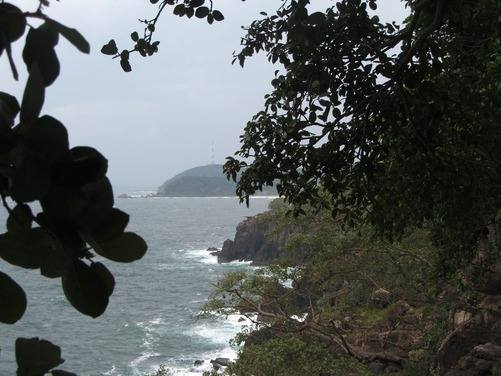 It is undoubtedly on account of this area that Trincomalee features large in ancient Sri Lankan history and lore.

First mentioned in the Sri Lankan epic poem the Mahavamsa, the rock houses a Shiva temple which reaches into antiquity. Naturally the Portuguese destroyed it in 1624 and all the sacred icons were rapidly buried out of harm’s way. In 1950 seven of the icons were recovered by archaeologists and others, including the sci-fi writer Arthur C Clarke, who spent most of his life in Sri Lanka.  Subsequently a new temple arose on the site to house the icons.  Worshippers sacrifice burning coconuts or hang tiny cradles into the sacred tree overlooking the sea. 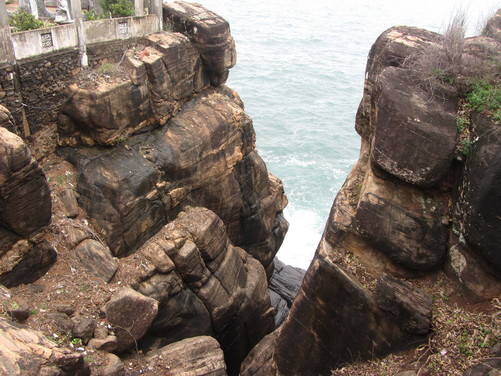 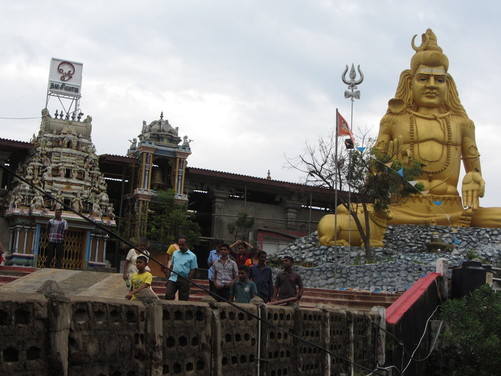 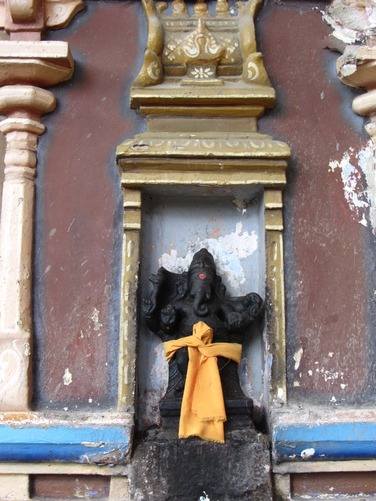 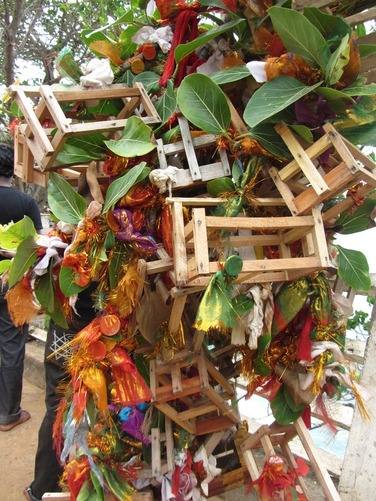 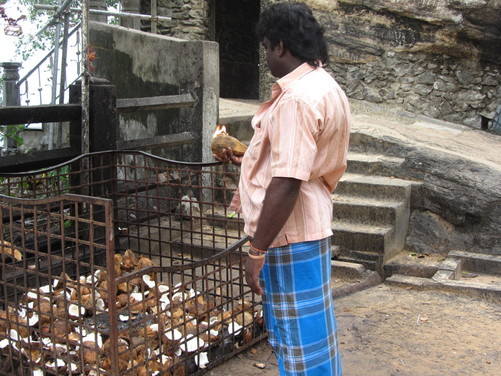 A hill opposte the temple, currently sporting three radio masts, is, according to legend, the hill where once stood the palace of Ravanna, the many-armed, many-headed demon king of Lanka, who abducted Sita in the Hindu epic  Ramayana. 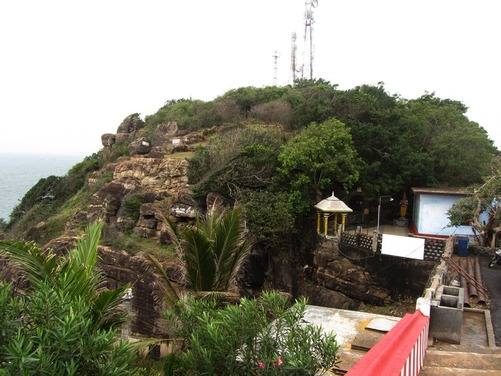 We managed to squeeze in one more visit in Trinco before the rain began to bucket down again and we took shelter in a restaurant.  According to my German companions’ guidebook, one Charles Austen, brother of the author Jane Austen, was buried in St Stephan’s cemetery on Dockyard Road.  My friend and fellow writer Jennifer (Jay) Margrave has just written a novel based on Jane Austen's life, in which Charles also figures. So I decided to drag my companions through the first drops of the impending deluge and look for his grave. But we were out of luck. No sign of any memorial stone to Captain Austen. Only a herd of friendly chital deer, sheltering between the tombstones. Other sources say he was buried in the graveyard on Esplanade Road. No sign of this so I  assume it’s the same thing but if you know better, do please let me know. 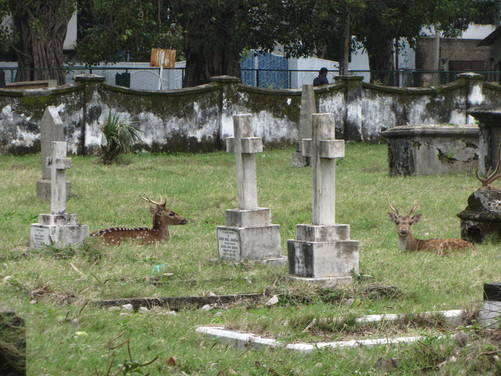 Then the rains came, and, after a tasty local lunch, we swam back to the van beneath a forest of umbrellas, and made our slow way back to the Nilaveli Beach Resort  praying that the road would not be swept away before we got there. We spent the rest of the afternoon watching the rain and drinking coffee. Oh yes, that insoluble coffee in Jaffna?  Not instant coffee at all, but Sri Lankan finely ground coffee, which we discovered was far from undrinkable. You are supposed to treat it like espresso and simply let it sink to the bottom of the cup. It is, in fact delicious and just what the doctor ordered to mollify rain-dampened moodiness. From now on we would all only drink ‘Sri Lankan coffee’. 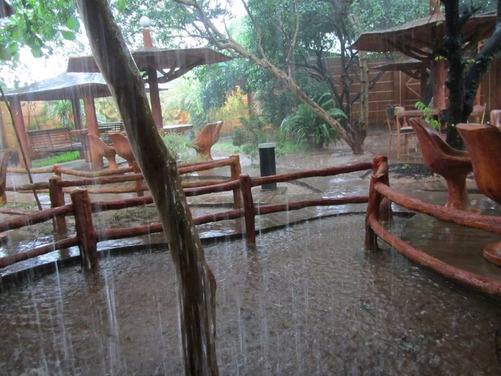