A little bit of history…

In the 4th century BCE the city of Anuradhapura in the North Central Province, became the first major capital of Sri Lanka. It was to remain the capital until the beginning of the 11th century when the city fell to the South Indian Chola dynasty, which set up a new capital in Polonnaruwa.

Buddhism reached Sri Lanka in the mid-third century BCE.  Brought from India by the Mauryan prince Mahinda, son of Emperor Ashoka, Buddhism was set to flower in Sri Lanka, while it gradually diminished in its country of origin.

Ashoka’s daughter Sanghamitta brought to Sri Lanka a cutting from the Bodhi tree in Bodhgaya under which the Buddha had gained enlightenment. This cutting, planted in Anuradhapura at the end of the 3rd century BCE, cemented the city’s standing as the seat of spiritual and physical power. The tree, still thriving today, has the oldest documented history of any living tree. The original in Bodhgaya died. A cutting from the Anuradhapura tree was subsequently taken back to India and planted in Sarnath, the deer park location of the Buddha’s first sermon, and thrives there to this day.

In those early days enlightenment was not achievable by the layman – and certainly not by the laywoman. The best they could hope for was to live a life according to Buddhist precepts and therefore to be reborn on a higher rung of the ladder of reincarnation. The direct road to enlightenment was confined to sanghas – communities of monks. This is known as Theravada Buddhism and is still practised in Sri Lanka today. Later, at the beginning of the Common Era, a new branch of Buddhism evolved, known today as Mahayana Buddhism, which opened the door to enlightenment to the laity. It inevitably resulted in the worship of a wider and more accessible pantheon than only the somewhat austere historical Buddha. Thus gods and goddesses, bodhisattvas and Buddhas of various heavens were drawn into the fold. Mahayana Buddhism is practised mainly in the Far East, but of course, some cross-over resulted and Mahayana images are also seen in Sri Lanka and other countries where Theravada is practised (such as Burma and Cambodia).

The focus of worship before the Common Era were burial mounds in which the Buddha’s relics and other objects related to him were interred. Known in India as stupas, they are more commonly referred to as dagobas in Sri Lanka. The earliest and most impressive Sri Lankan dagobas are in Anuradhapura, along with ruins of sanghas and palaces and a plethora of carvings from the 1000 years of the city’s splendour.

The historic sites of Anuradhapura, the first of the seven World Heritage Sites we would visit in Sri Lanka, are scattered throughout a wide area. Some sort of vehicle – be it a car, bike or three-wheeler is needed.  We had our ‘van’ as they call the Toyota people carriers they use for small tour groups in Sri Lanka. And we had Upali, our driver, who had been supplied by the tour company as our ‘driver guide’ for the 19 days of our tour.

First stop in Anuradhapura was the Isurumuniya Vihara. Vihara means monastery, although in Sri Lanka this seems to incorporate rather more. In this case the main focus is a rock temple with several world-famous carvings. Not least some elephants from the 3rd century BCE, carved onto the rock face by a pool and a carving of a man seated in royal ease with his horse . It’s all meant to be an invocation for rain  (all elephants were clouds once) 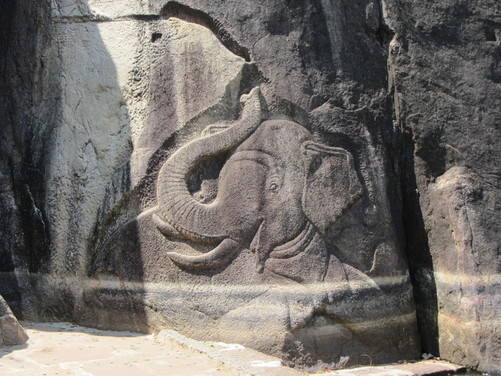 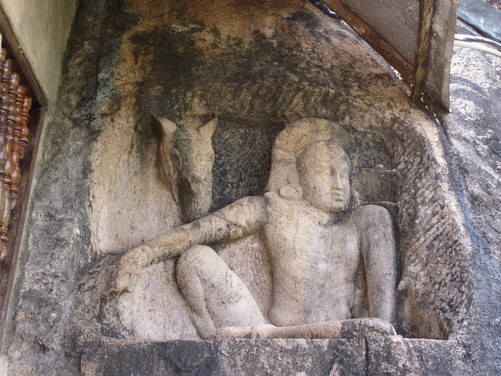 We went further into the site. Our young driver-guide  knew where to find each site and what it was called, but not the finer details.

So out came the guide books and, with the help of the on-site signs - we constructed our own guided tour.

The Isurumuniya site includes a small museum. Inside are many fine Gupta-influenced carvings. The Gupta dynasty marked the Golden Age of India. Most of the museum’s carvings came from 4th-5th centuries and show how Gupta art dominated, even in Sri Lanka.  Finest and most famous of all is the iconic sculpture known as ‘The Lovers’. Signs forbid photography without permission, but a word with the easy-going custodian was enough to allow me to photograph inside the museum. The Lovers is thought to depict prince Saliya  and his lower cast mistress Asokamala, for whom Saliya gave up the right to be the king. Another legend declares them to be Shiva and Parvathi. 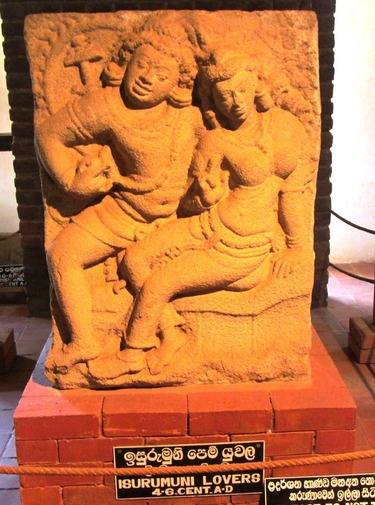 The Isurumuniya complex offered more than ancient carvings, a rock temple and a dagoba. This reclining Buddha (Parinirvana – the Buddha at the time of his death achieving the state of ‘nirvana’) was housed in an ‘image house’. Maddeningly I can find no information about it other than that it is ‘recent’. This could mean anything from the 16th century to yesterday. It struck me as particularly beautiful. Art does not have to be old to be heart-stopping. As you walk along it towards the head, the eyes seem to close. It’s not unusual, but this is an exquisite example. 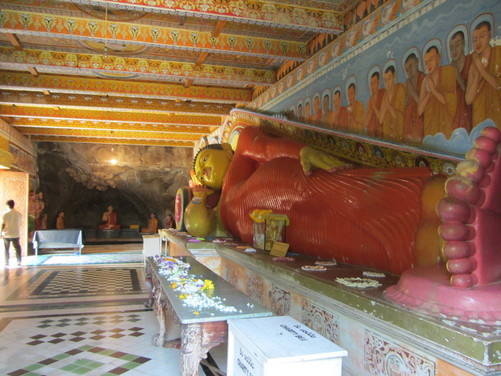 From the Isurumuniya we moved on to the Abhayagiri Museum and dagoba, pausing to watch this beautiful pheasant-tailed jacana on a lotus pond. 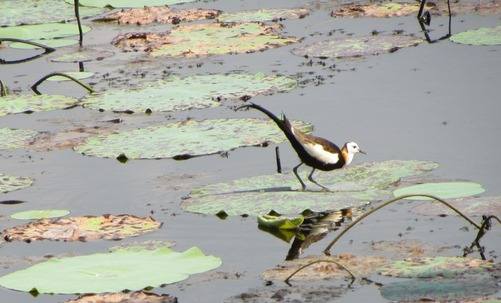 And to greet a passing thalagoya (land monitor). 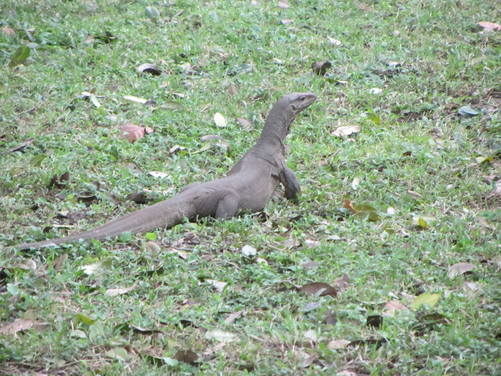 The 1st-2nd century Abhayagiri dagoba was once surrounded by a monastery of 5000 monks though now only a few columns remain. The dagoba, like most of them, has been reworked over the centuries. 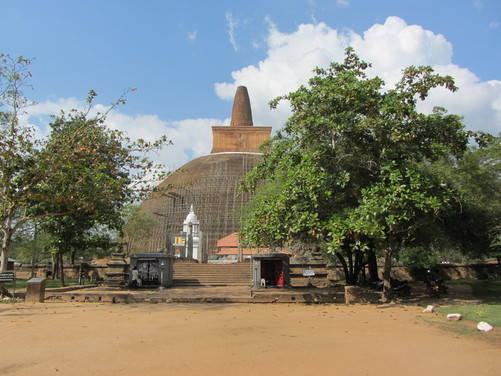 Nearby lie arguably two of Anuradhapura’s most important icons – the moonstones. Moonstones are uniquely Sri Lankan and were placed at the foot of steps at the entrances of temples and dagobas. Semi-circular, they have several carved bands, all steeped in meanings referring to the journey from samsara to enlightenment. The Abhayagiri Moonstone dates from 7th-8th centuries. 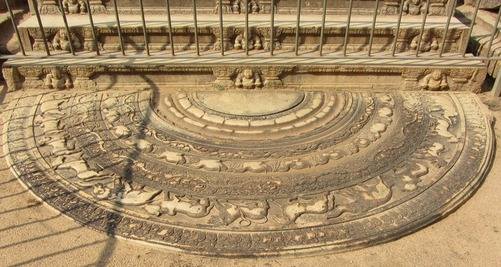 Next we stopped by to pay homage to the Samadhi Buddha (Buddha meditating). Dating from the 4th century a picture of this image is said to have brought comfort to Nehru during his time of imprisonment by the British. Notices here warn the tactless tourist not to have photographs taken with their back to the image – in other words, don’t pose in front of it. Quite right too. I am often surprised at some people’s lack of sensitivity about other peoples’ holy places. 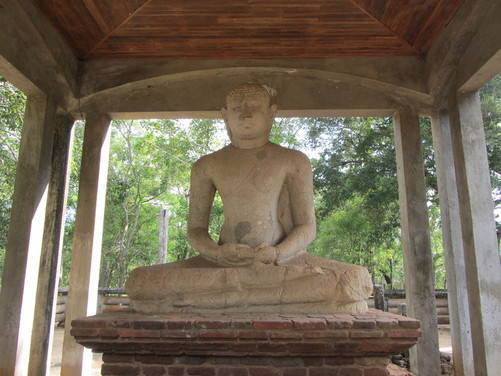 We called in at the Thuparama Dagoba – apparently the oldest in the world (3rd century BCE), though many times restored. 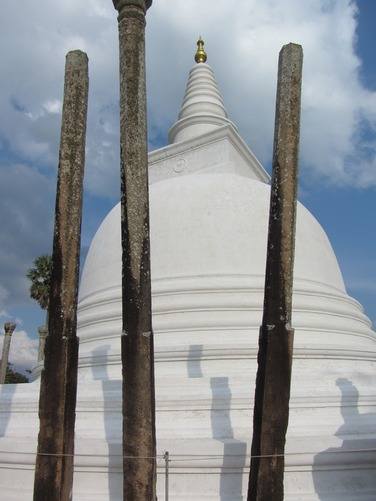 From the oldest to the biggest. The Jetavanarama Dagoba was next port of call. Dating from the 3rd century, at the time supposedly only two of Egypt’s pyramids were taller, and even now it’s said to be the biggest brick-built construction in the world. 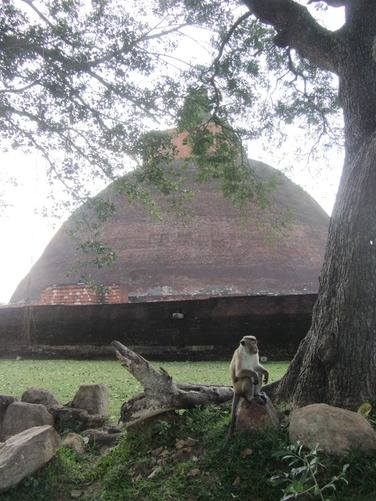 Last and best among the dagobas was the Ruvanvelisaya. Best because it was alive! We got there as the day was ending and the processions were beginning. The dagoba is surrounded by one of the world’s most iconic walls – the elephant wall featuring hundreds of almost life-sized elephants. Originally from the second century BCE, most of the elephants have been restored but it’s still fabulous. And wherever you go in Sri Lanka you’ll see copies of this wall (though none so monumental) surrounding many temples and dagobas. 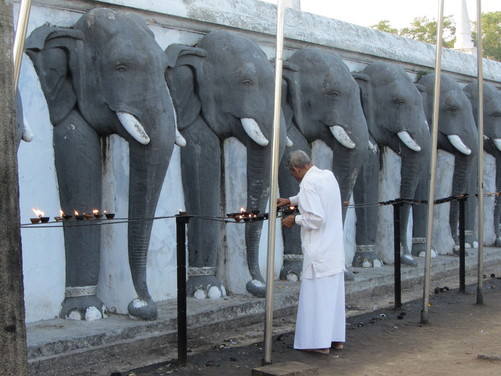 At various points around the dagoba were placed Buddha images, where people (including us) offered lotus flowers that were for sale at stalls outside the complex. I learnt from Upali that you are not supposed to sniff the blooms before offering them to the Buddha. A hard rule to keep! Small temples dotted the courtyard. 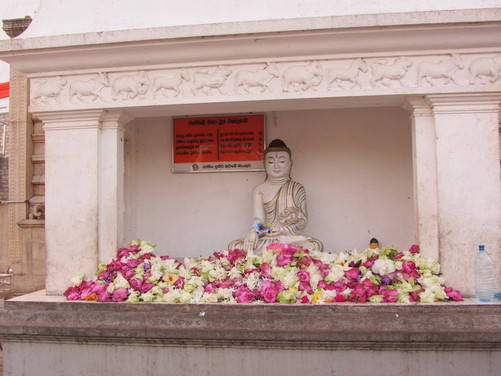 As evening drew in we watched mesmerised as procession after procession, carrying partly rolled up banners, descended on the dagoba.. As always in Sri Lanka, the worshippers wore white. They were headed by a loud band of musicians playing drums and wind instruments. 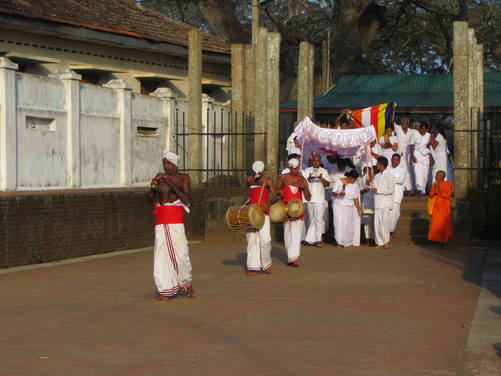 When the procession reached the dagoba, the banner was carefully wrapped all the way around its base. The first one we saw was in the pattern of the Buddhist flag. Upali said the processions could be for any kind of celebration – a birthday, initiation into monkhood, the full moon and so on. 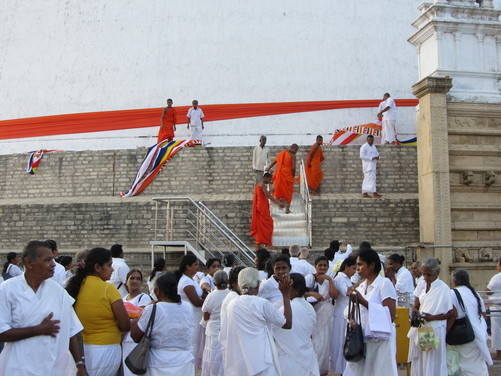 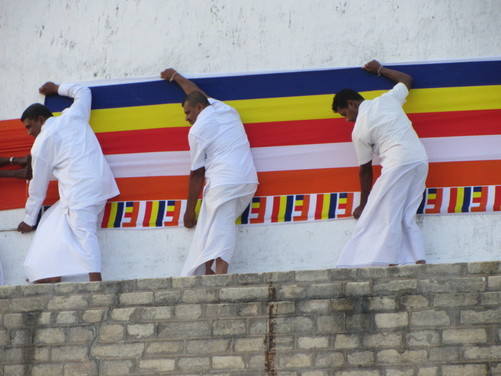 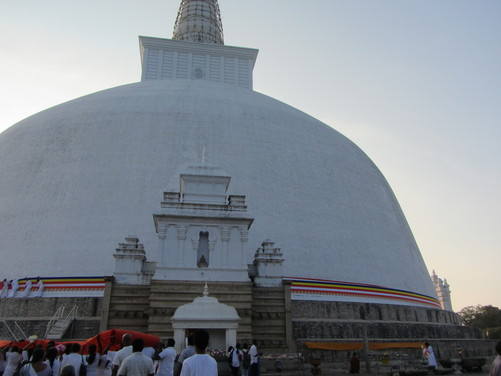 A few hundred metres from the Ruvanvelisaya dagoba is the famous Bodhi tree that I mentioned in my historical introduction.  We paid a visit to this icon of the Buddhist world before heading back past the Ruvanvelisaya as the sun went down. 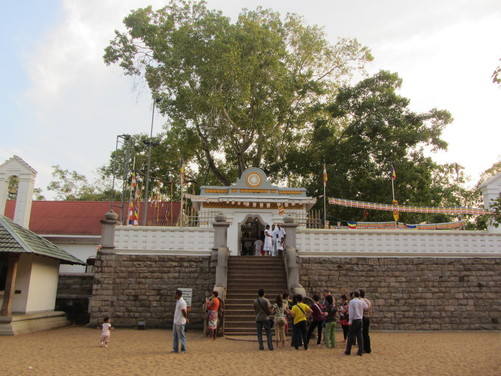 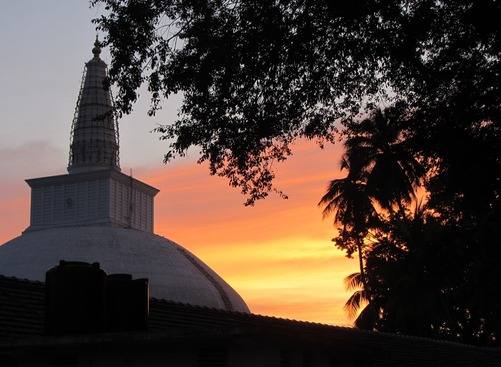