A lot of Burmese life appears to revolve around the market place. You got the impression that while the men are in the temple, treading the sacred places where Woman Shall Not Tread, the women are buying and selling the material necessities of life.

Nyaung U market place near Pagan is a colourful, confusing and noisy place. We were warned to hang on to our possessions. Considering that Burma is promoted as practically crime-free, the number of warnings we were given was quite interesting.

Most of the sellers (all female) were cross-legged on the ground, with mounds of potatoes, chillies, tomatoes or whatever commodity they were selling, spread out or piled in front of them. 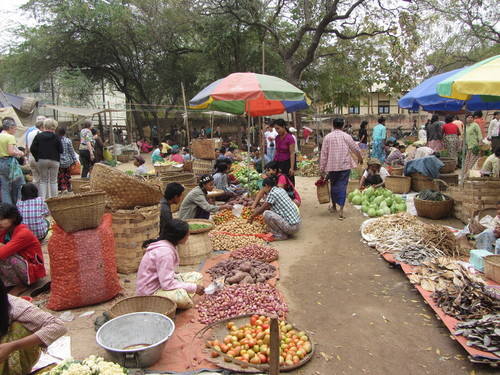 Cheroot smoking appeared to be a popular occupation while they waited for customers. 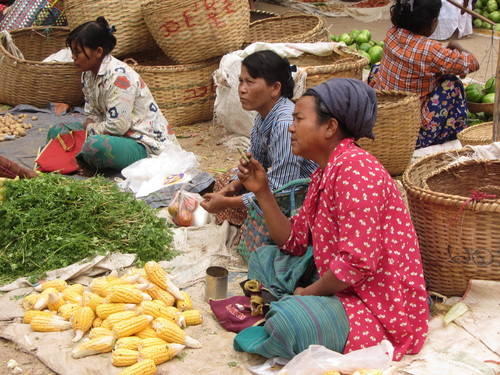 Scales were fairly primitive but evidently did the job. 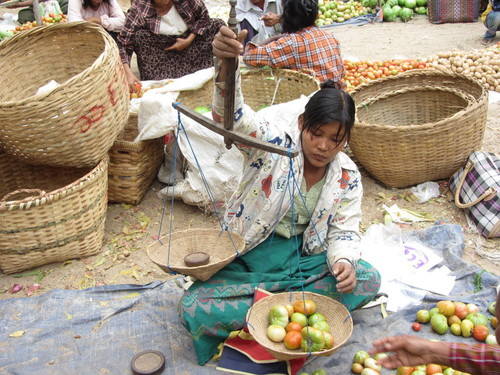 Some of the stuff on sale was a bit mysterious and none too salubrious to our eyes. Dried fish was much in evidence, just as in Thailand. 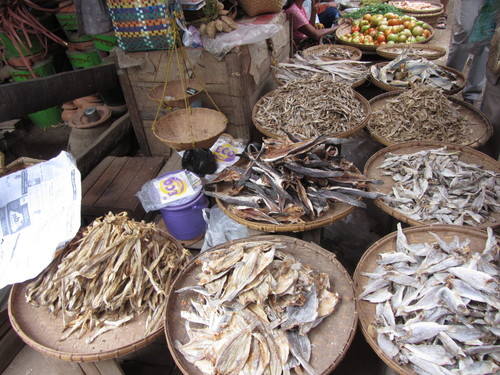 Potatoes were extremely plentiful, though strangely, I can’t recall eating any in Burma. 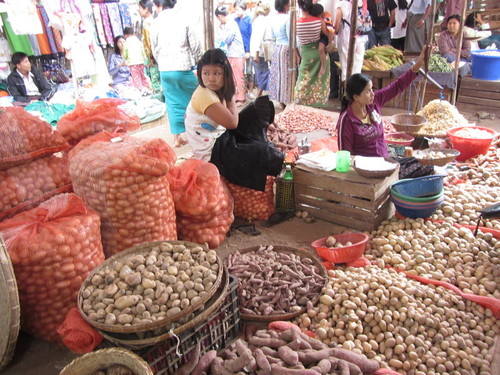 Most important were branches from the thanaka tree, for grinding into the creamy-coloured paste that women and children widely wear on their faces as a cosmetic that is suppose to be beneficial for the skin. 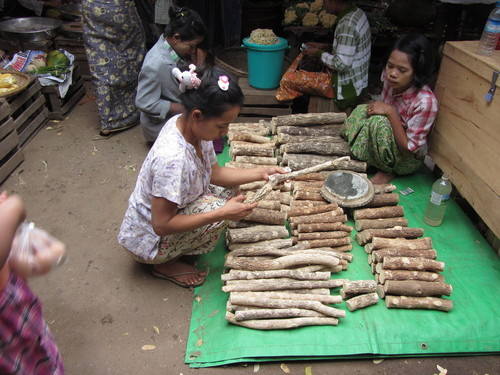 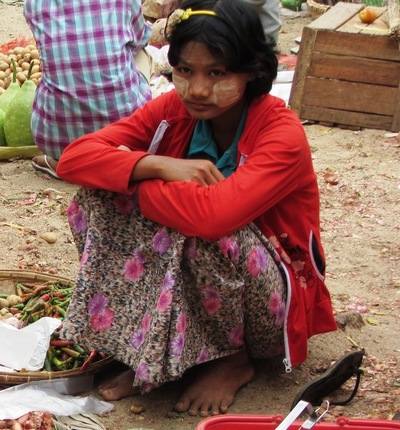 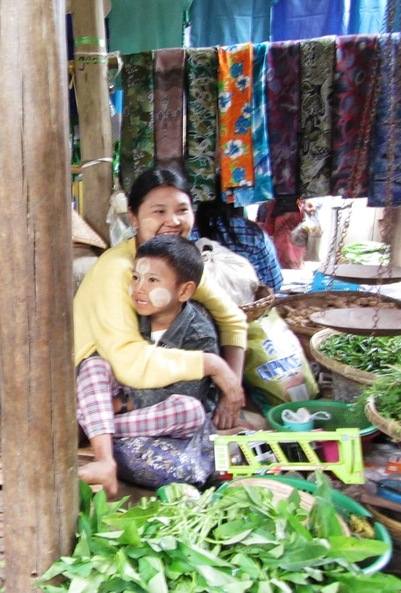 Garlic was sold by the bucketful – an essential ingredient of Burmese cooking. This proved a problem for me at mealtimes. Two of our group could not stand the stuff,  a fact that was rapidly communicated to restaurant staff, who prepared special garlic-free food for them.  Meals were served on long tables. Like Chinese and Thai food, it came in multiple small dishes, each dish serving four people. If you were unlucky enough to sit next to the garlic-haters  you ended up having to partake of their garlic-free meals. Now Burmese food is not the most inspiring at the best of times; without garlic it was thoroughly boring.  After getting caught out once, I learned my lesson and made sure I sat as far away from them as possible in the future! 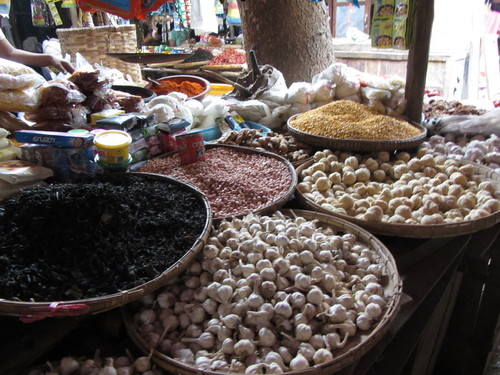 Now here’s an interesting fact: Burma is one of the only coumntries in the world where tea is eaten as well as drunk. The leaves are pickled and regarded as a delicacy. They call it lahpet. I didn’t get a chance to try it. But I saw it for sale on the market. Apparently some brands have been banned in some places because they has been found to contain carcinogenic colouring agents. 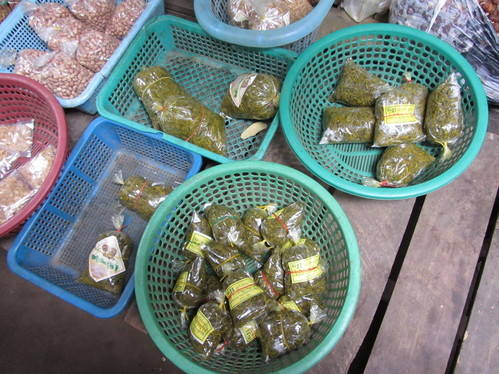 These don’t look too appetising – some  sort of large maggot, perhaps? No, they are actually bamboo shoots and despite their appearance they taste fine – I’m sure we’ve all had them in Chinese restaurants. 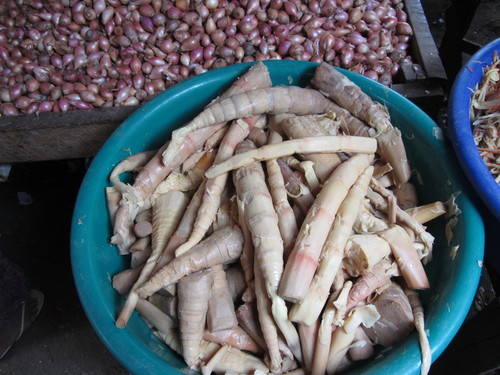 As for this – no it’s not buffalo testicles – it’s tofu. There’s a lot of it around, all shapes and sizes. Come to think of it, I don't remember seeing any buffalo in Burma. 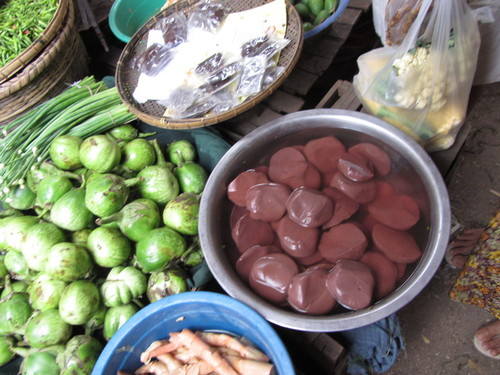 But it’s not all food on the market. If you feel inclined to buy a Burmese wooden puppet, you can get one here. Or if you need a new water pot, there are plenty available too. 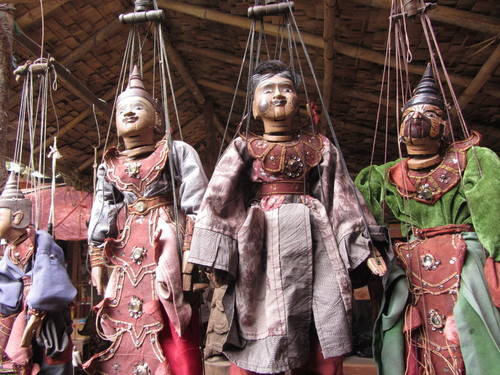 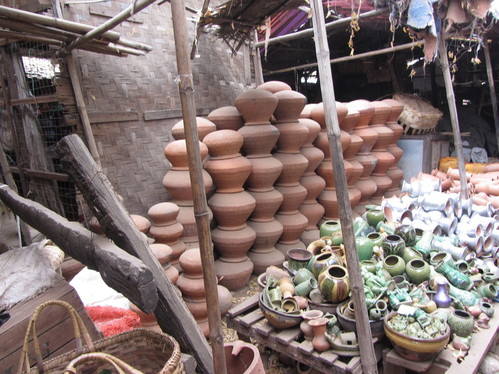 And of course there are flowers, though the selection was limited. 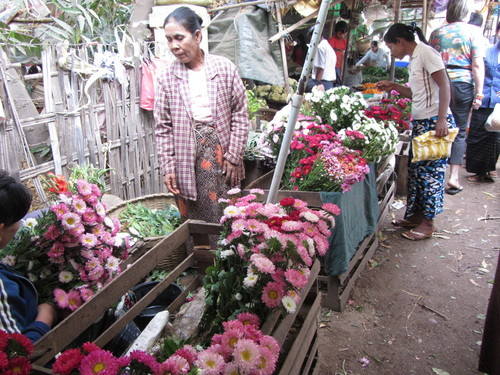 From what I saw everywhere, it would seem that food is plentiful – at least the vegetarian and sea-food variety. And with all that fish and tofu, there is plenty of protein around too.