If there’s one thing Mandalay is famous for, apart from Kipling (who never went there), and the Glass Palace, it’s temples – I’ve harangued you with a few in the area already.

They’re not particularly old and not all that interesting architecturally, generally consisting of stylised  Buddhas and brick and stucco pagodas, all much of a muchness. Their interest lies beyond that. Religion, made manifest by the temple, is a central part of Burmese life, rather more so than in many other countries.  If you aren’t interested, forget Burma. There’s not much else unless you’re content to lie on a tropical beach and ignore the people whose beach you’re lying on.  It’s quite possible to do so. I wonder how many people don’t bother to venture beyond Benidorm into the real Spain, or don’t realise that there’s a vast country called India of which Goa is a small, unrepresentative part.

If, like me, you believe that a country equals its people and everything else follows on from that, you will find Mandalay’s temples fascinating.  Let’s take a look at three of them. We’ll start with the most important temple in Mandalay, the Mahamuni (Sanskrit: Maha = great, Muni = sage). A notice as you enter warns that: 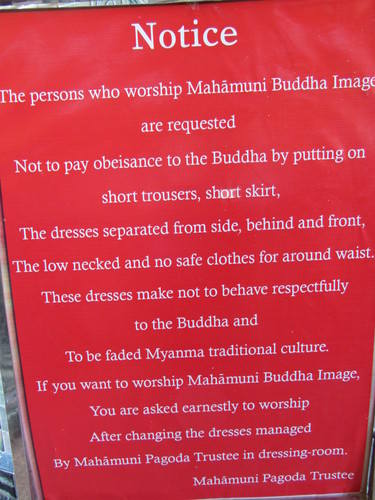 Should you be caught out in your short pants and ‘spaghetti blouse’, you will be requested to step into a ‘dressing room’ and don more fitting garb (a lunghi) loaned by the temple.

Once you’ve run the gauntlet of cheap souvenir and devotional stalls lining the corridors, you reach the shrine, which is set in a hall festooned with fine filigree carved and gilded arches. The Buddha image sits in bhumisparsha mudra (calling the earth to witness) in the central shrine. Now this Buddha, ostensibly originally from the Arakan (Rakhine) area of what now is Burma, is a breath of fresh air among more recent stylised white-faced, red-lipped Buddhist art.  Dating back to at least the 11th century it was transported to Mandalay in the 18th century when a Burmese monarch conquered and looted the Arakanese kingdom – apparently the image was cut up and reassembled! It is almost 4 metres high and cast in bronze overlaid with gold. 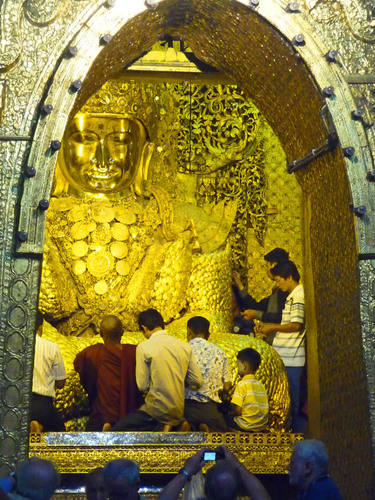 The face is also exquisite in profile. 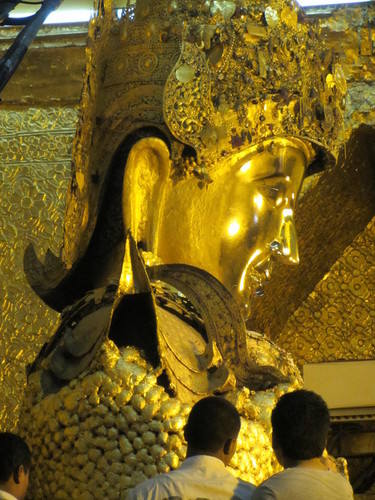 The image has gone through several incarnations according to the pictures on the wall. 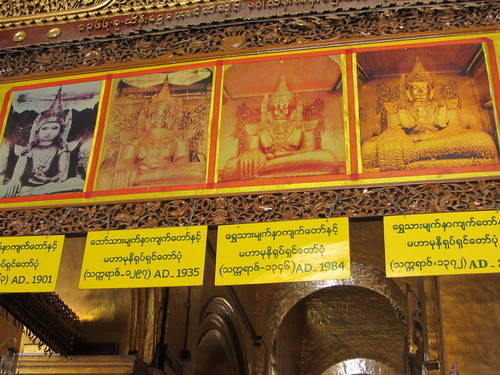 This is partly due to 19th century fire damage to the temple (but not to the image), which released a quantity of gold, later used to further decorate the Buddha, most notably with a ‘robe’ that appears to have been recently enhanced and looks to me rather like fish-scales. Why can’t they leave well alone?

As usual in Burma, only the men are allowed up to the image, and take up the first rows in front of the image when they gather for quiet worship or contemplation. Women and children are confined to the back.  Except that is, for tourists who don’t get the message!

The temple also houses other spoils of war, in the form of four large, slightly worse for wear, bronze images – a lion, a couple of male figures and Airavata, the sacred elephant. These were looted from Thailand in the 16th century and apparently have healing qualities. As the notice tells us: if one prays and  brushes the figures with the related parts the pain and disease will relieve. Though this seems to be a slight mistranslation as everyone I saw was brushing the related parts of the figures with their fingers, instead of brushing their own related parts on the figures (unless they all had finger problems, which I doubt somehow). 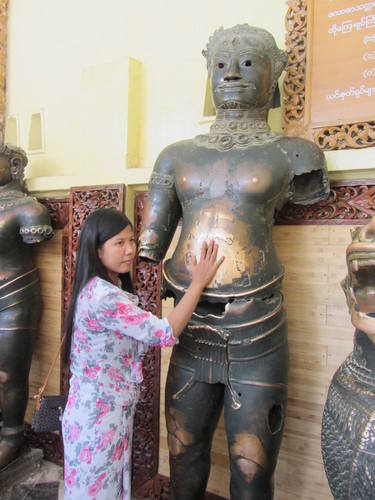 There’s plenty of opportunity to make a donation too – like this strange, Disney-like Buddha scene - the ground of the stage set scarcely peeping through the mound of banknotes. 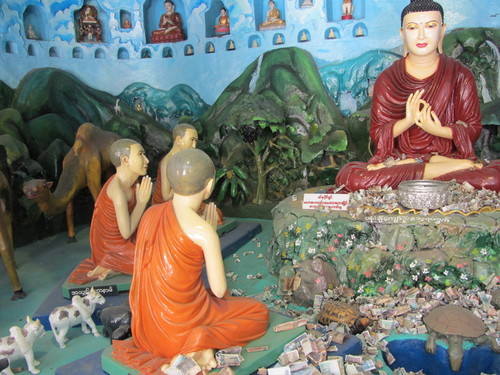 Then there are weird fun-fair look-alike carousels – you have to throw your donation into one of the pots while it revolves. There seems to be a lot of cash there (though some denominations are very low).  Quite impressive for one of the poorest countries on the planet. Makes you think, doesn’t

I didn’t see any homage to the Generals here.  But the Lady was very much in evidence (as was her father). 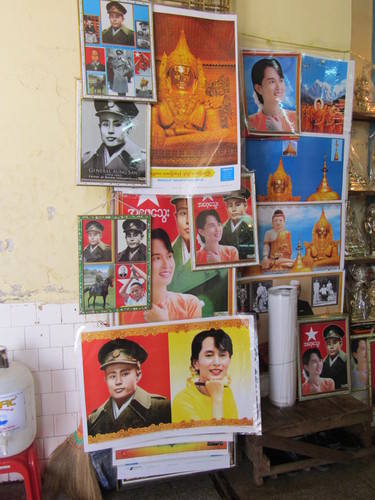 But you do wonder, don’t you, what is in people’s heads, when you see this on the back of a T-shirt. The front was even worse – one huge Hakenkreuz. And before you tell me that this is an ancient Buddhist symbol, well, no, it’s not. Not turned at this angle. This is the Nazi take on it 100%. Let’s hope it’s just ignorance rather than evil intent. 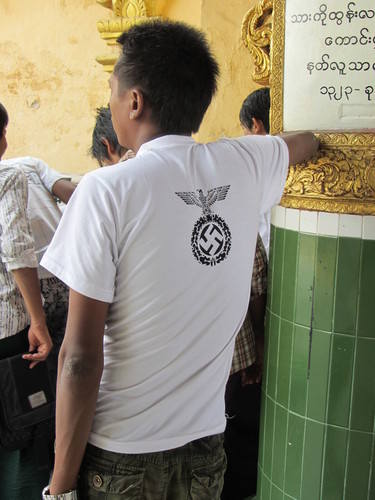 The second temple on my list, the Shwenandaw Kyaung Temple,  isn’t in origin actually a temple at all. It’s part of the  19th century wooden palace (the Glass Palace) of king Mindon, who was inconsiderate enough to die in it, thus leading his son, King Thebaw to conclude that it was haunted. So Thebaw had it removed from the palace grounds and reconstructed outside as a monastery. Which was quite lucky because the Japanese then took over the main palace during the war, with the consequence that the allies bombed it  and burnt it down to the ground. With the exception of the Shwenandaw Kyaung.It’s not like the other temples. For a start, it’s wood – teak to be precise. It abounds in beautiful carvings on the exterior, some restored, some crumbling and fragile. Inside, enormous teak pillars stand out against the darkness, the Buddha figure is gilded (as much of the whole place originally was) and there are wooden carvings of the Buddhist Jatakas, the Nats and many celestial figures. 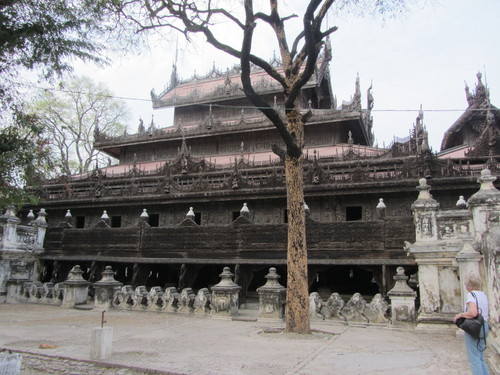 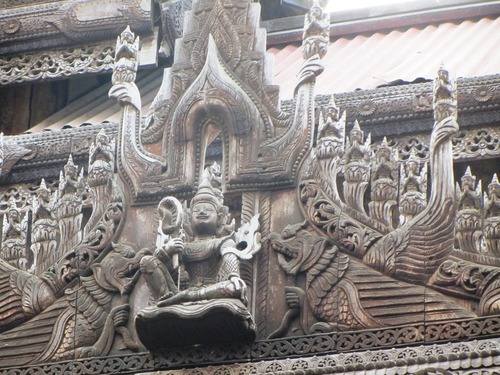 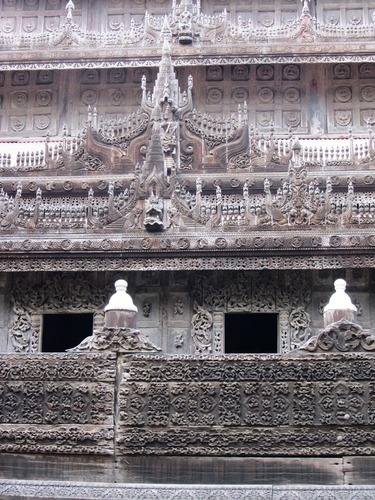 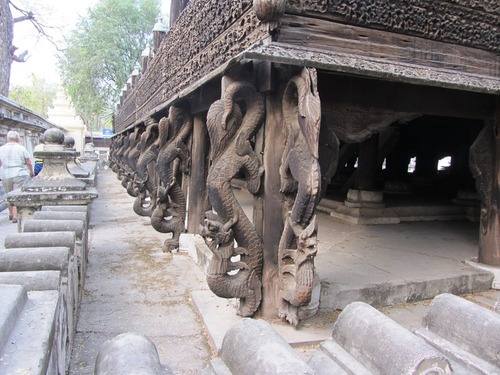 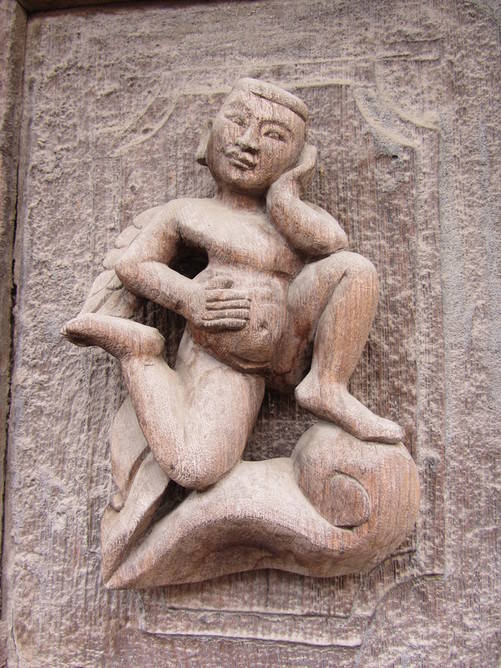 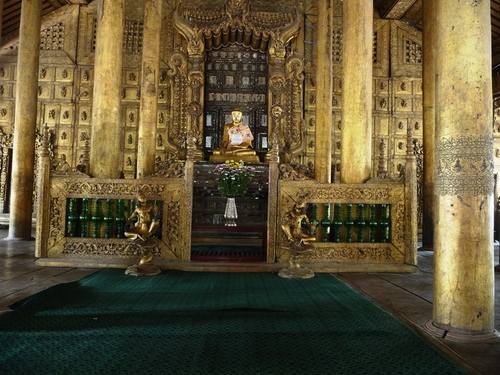 And finally … we’re going to see the largest book in the world, said Frau G, our guide. What she didn’t tell us was that the book at the Maha Lokamarazein Kuthodaw Temple, consisting of the entire canon of the Buddhist scriptures,  was in the form of 729 stone steles lined up in mini-stupas  in the temple courtyard.  Hm. Interesting though not life-changing. 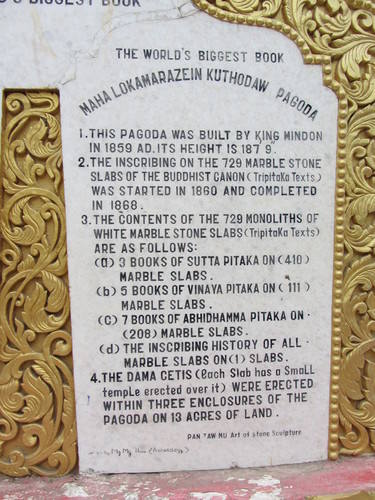 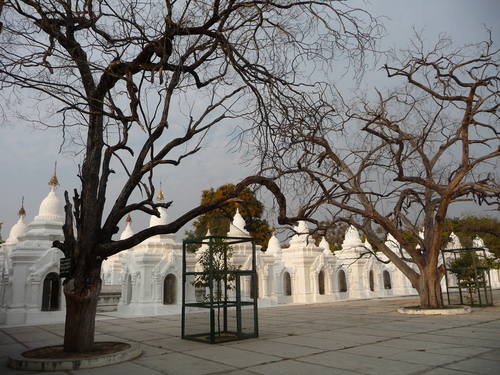 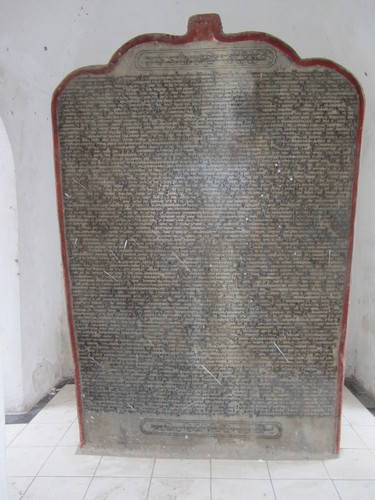 As usual there were some stalls lining the temple corridor but unusually there were also a few touts targeting the tourists. I allowed myself to be targeted by a young lady and bought the gong she was selling because it had a nice tone. Now I’ve got it, I have no idea what to do with it. A peculiar thing happened just after I’d made my purchase. The vendor then turned her attention to an elderly couple in our group, who spent a few moments bartering with her. I’ve forgotten what she was trying to sell them and whether they ended up reaching an agreement. Another tout  joined in – a man. Moments after the couple had parted company with them, the husband gave a cry and blurted out that his camera had gone. He kept a small compact alongside a larger camera in a camera case. The zip had been opened and the compact camera had disappeared.

This caused considerable commotion. The victim accused the male tout of stealing his camera. Our horrified guide insisted that it was impossible. Temple vendors have special licences issued to them and woe betide them with the authorities if they put a foot wrong. It was totally unheard of, and even an accusation could result in the withdrawal of his license to sell, apart from more serious consequences. The woman who had sold me the gong came to her fellow-trader’s defence.

The arguments on both sides were persuasive. It appeared that committing a crime in the temple carried punishment that far outweighed the benefits. The victim refused to withdraw his accusation: the camera had been there before they started bartering. Afterwards it was gone. The accused, the guides and the other vendors insisted on his innocence. It must have been someone else. There were other people in the temple, after all. Impossible, the victim said. We left without resolving the issue, and with a slightly bitter taste in our mouths.

And thus endeth our short stay in Mandalay. Well, not quite because the 30 km ride back to the airport, to fly on to Pagan, was without doubt the most moving and exciting event of our Mandalay sojourn, indeed probably of the whole tour.

We were catching an early morning flight to Pagan. I’ve mentioned elsewhere that Aung San Suu Kyi seemed to be hard on our heels. In this case, she was flying in at the same time as we were flying out.

All along the road we overtook vehicles heading to the airport to greet The Lady. How do we know? The men were openly wearing the coral-coloured shirt that had come to represent her party, the National League for Democracy. Many were holding aloft the flag of the NLD as they rode on their motorbikes and bicycles, or draped  it out of the taxi-vans, cars, trucks and even horse-drawn tongas that were all hurrying to the airport. As we overtook them they waved cheerfully at us. Everyone was smiling. There was an air of such optimism that it even pervaded our coach. By the time we got to  the airport we were all in high spirits and feeling strangely moved. 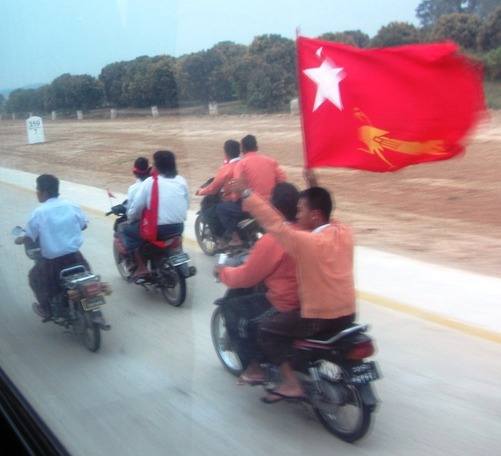 At the airport the crowds were thick, some had clambered onto vehicles to get a better view and to wave their flags over the crowds. Others sported a picture of Aung San Suu Kyi emblazoned on their t-shirt. The joy and anticipation were palpable. The airport officials stood back and let it all happen. No-one stopped us from taking photographs. 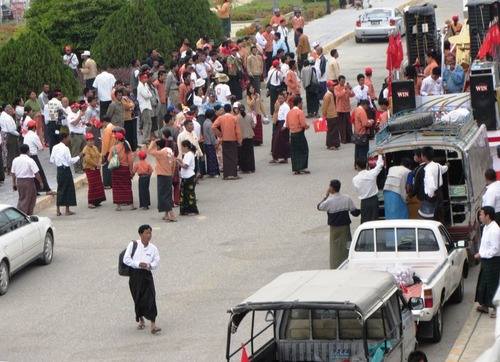 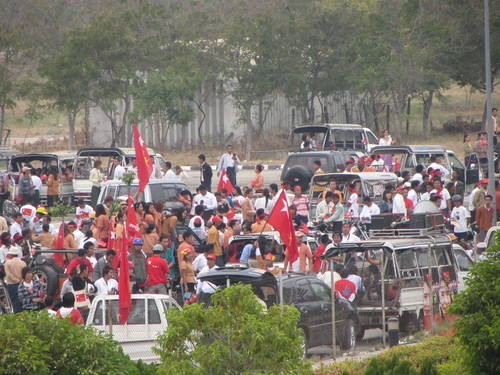 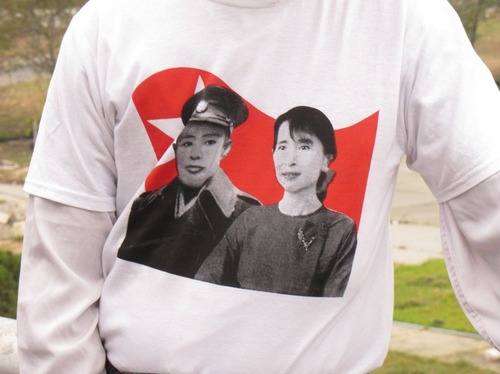 As our flight taxied down the runway, our guide pointed to a plane that had just landed and was stationary in an isolated corner of the airport. That’s her plane, she said.

The unfortunate corollary to this story, which we heard later, was that Aung San Suu Kyi was taken ill on the flight and it was several hours before she could emerge to greet the adoring crowds. This made me think too. Thank goodness, it wasn’t serious, but should something happen too her, what fate then would await Burma? It seems a very dangerous situation, when a nation’s hopes and dreams are all centred on one person. Let us hope she maintains good health  and keeps safe for a long time ahead. Otherwise I fear for the country.