Sagaing Hill near Mandalay is like a wedding cake: a multi-layered confectionary of white and gold pagodas scattered across the landscape like handbells, garlanded together by flights of steps undulating up and down the hillside. 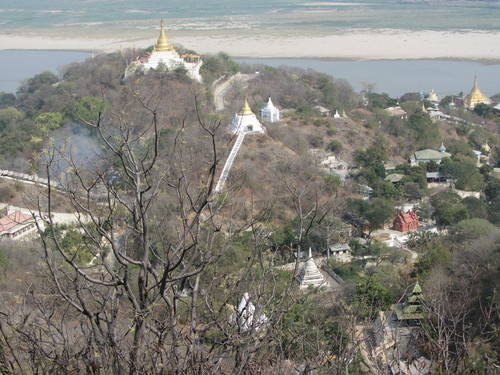 The hill is located near the Irrawaddy river, which we had to cross to get there. From the base, battered open-sided vans, the sort commonly used to bus people around, took us part way up the hill.

The day was hot, so the stone steps were hot on bare feet. In Burma not even socks are allowed on temple lands.  So grilled soles were the order of the day. It was a case of hopping from shadow to shadow – though the shadows amounted to little more than a one inch strip along the wall.

The route to the U Min Thonze Cave temple looked daunting, but everyone in our group struggled gamely on. Some of us sprinted up to get it over with, others stopped often to take in the view  (and the photographs), those endowed with more corpulence and less youth  took their time. But we all got there in the end.

The U min Thonze Cave temple had a ring of familiarity about it. It reminded me – in concept – of the ancient cave temple at Dambulla  in Sri Lanka.  Except that the latter are older and much more atmospheric. 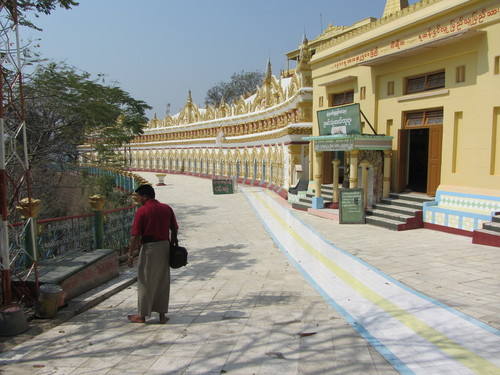 This Burmese cave temple has been cleaned up and restored, with the sanitising effect that seems to pervade Burmese restoration. The row of seated Buddhas flanking the wall at the back of the cave are all in bhumisparsha mudra – that is, their right hand is touching the  ground – calling the earth to witness that the Buddha could not be distracted from his search for enlightenment. The left hand is in dhyana, that is meditation, mudra. 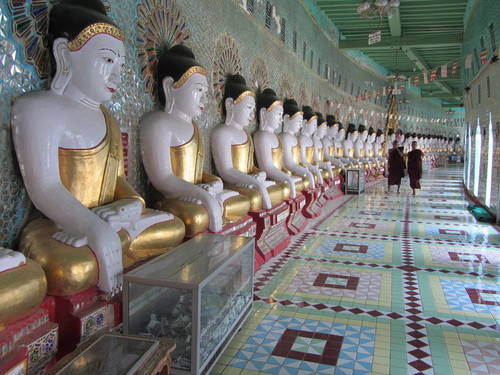 These Buddhas are standard Burmese fare  and bear the hallmarks of Buddhas the world over, such as three neck rings, the elongated ears signifying royalty, the ushnisha - bump on the head, which, unlike the tall  ‘flame’style common in other parts of SE Asia and Sri Lanka, is rounded.  The eyes, whilst drooping, are open and the lips are uncomfortably red against the white of their bodies.  These are not Buddhas that instil in me the sense of overwhelming beauty and serenity of those in Sri Lanka,  Cambodia and Thailand. 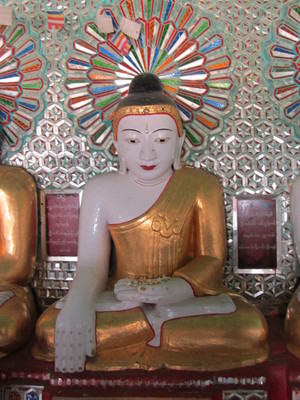 We continued on to another temple on Sagaing Hill – the Soon U Ponya Shin Paya. Apart from the ubiquitous stylized Buddha figures this temple offered several interesting features. Two of the Buddha’s previous ‘incarnations’ were as a rabbit and a frog, and the temple contains delightful large bronzes of both.  A local legend , obviously closely entwined with the Buddha legend, tells that the temple was spawned from the mating of a frog and a rabbit. 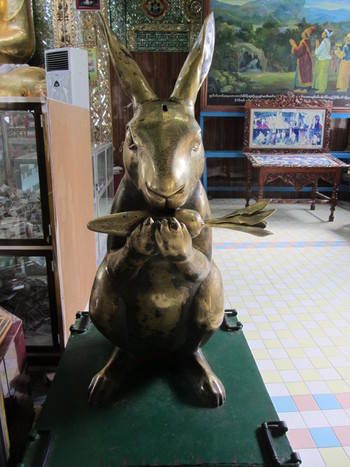 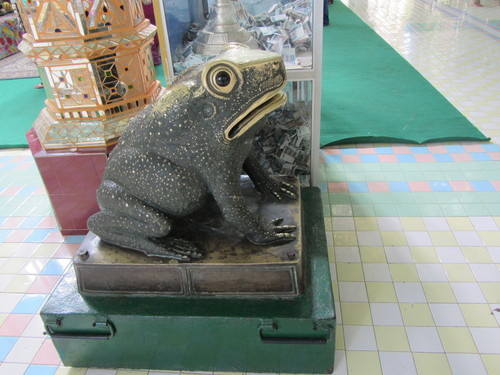 The temple contained several large showcases full of photographs of visits from the ruling generals. Often we tend to think of military dictatorships  as irreligious, placing themselves above God, destroying all evidence of  religious worship, indeed seeing religion as a threat and a rival to their power.  This is not the case in Burma, where the generals are themselves practising Buddhists. 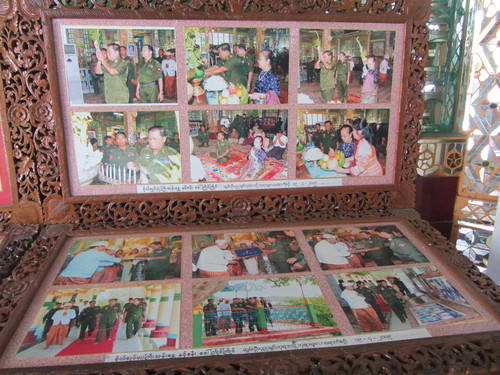 The roofed walkways around the temple courtyard showed paintings from the Buddhist legends and jatakas. Some of them were show-stoppers. This one involves an old king who dreamt of a jackal urinating into a bowl of gold. The Buddha interpreted the dream as the desecration of high-born noblewomen marrying beneath their status…  The implication here is that even the Buddha was not immune to caste considerations. 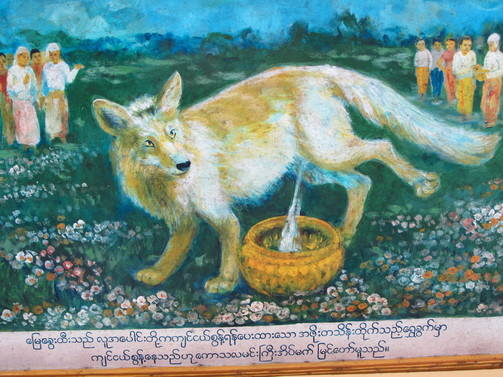 In a corner of the courtyard this artist was producing interesting scenes of Burma by  using oil paint on computer photo paper. It was a bit different so I bought one, as did several of our group. He was doing a brisk trade. 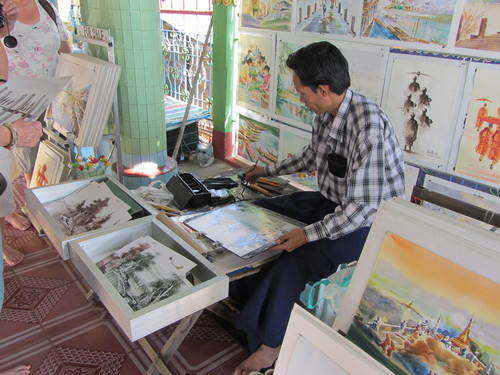 The pagoda courtyard itself, restored to look pristine and new, was colourful, the tiled floor setting off the gold-painted pagoda. 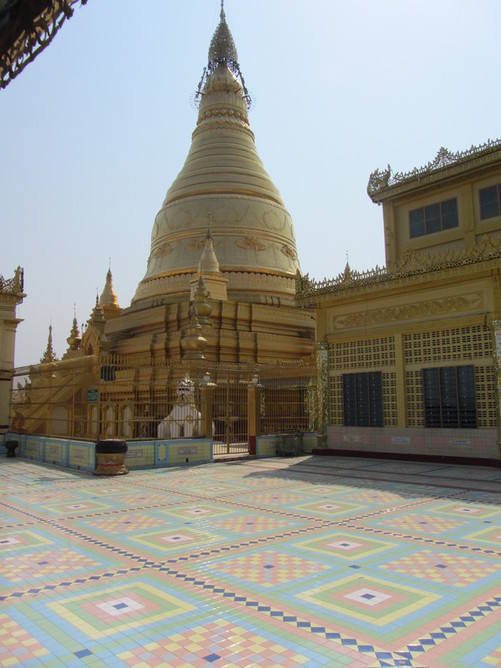 We had a chance to get a close-up look at a hti, the elaborate royal umbrella finial that tops Burmese temples, brought down presumably for restoration, or perhaps it had been replaced by the one you can see in the previous picture. 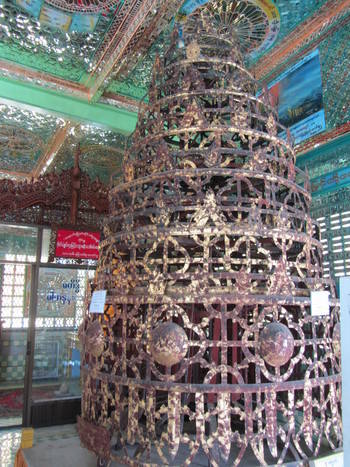 And the temple offerings were, indeed, food fit for the gods, or in this case, for the Buddha, or possibly the Nats. 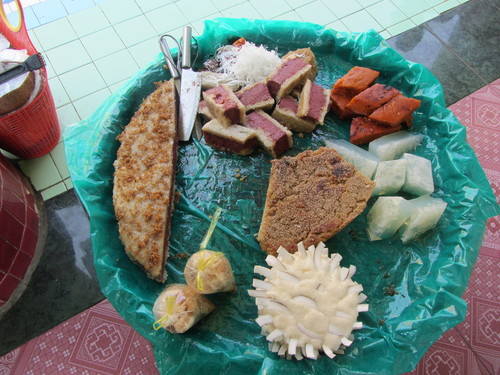 At the end of the day we were ready for a good shower and a meal. But, no, we had to be paraded through a silversmiths 'workshop' and a gold leaf 'factory' before we were released to wallow in the hotel pool before dinner.

I agree that tourists should contribute to the local community, and presumably they do that already by creating jobs in the hotel and catering trades.

However, all in all, I'm not as vehemently anti-shop as I used to be, although I rarely buy anything, since I don't want cheap tat manufactured for tourists and I can't afford the rest. I've mellowed with age, and I can see that the local craftsmen have a right to some of the spoils of tourism. And yes, it is important and also  interesting to see these traditional local craftsmen and women in action. So I don't mind a quick look at their workshops. But I'd rather be asked first.  As it happened, our tour guide had got the message and did ask. Too exhausted to protest I let myself be dragged along, since the Germans were keen.

There seems to be a false impression that tourists have unlimited wealth to spend on gold plated Buddhas and solid silver bowls. Perhaps some do. I suppose they only have to sell a couple a week.  But both these workshops, unlike the ones on Inle Lake,  did shed light on crafts important through the ages in the field of religious art. The two men beating gold into paper thin one inch squares were awesome. The use of gold leaf on Buddha images and decorative items is age-old, as are the silver vessels used in temples for offerings.  I'm glad, in the end, that bloodymindedness did not prevent me from a rather fascinating glimpse into this aspect of Burmese life. 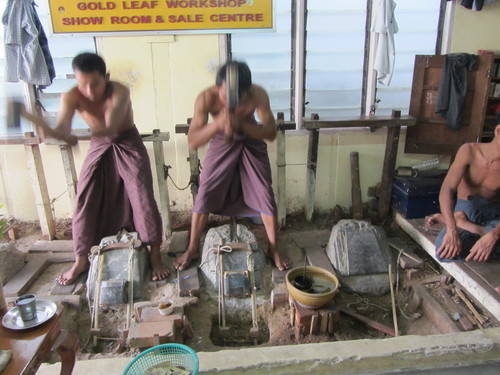 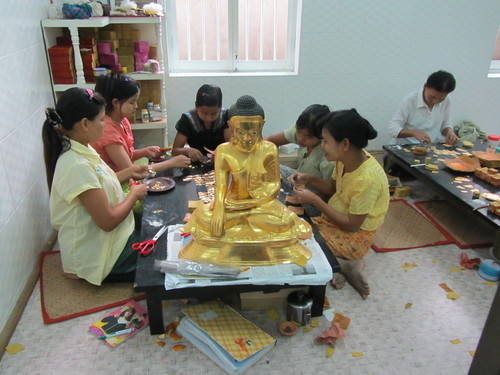 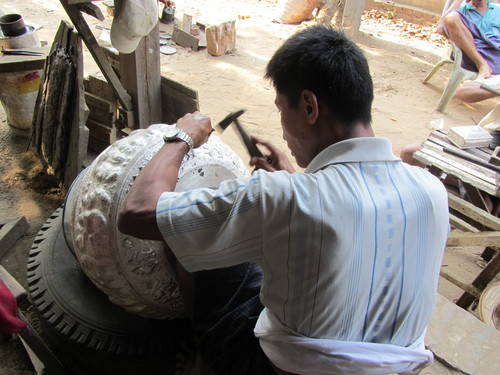