…Where the flyin’ fishes play, and the sun comes up like thunder outer China ‘crost the bay

Actually the road to Mandalay isn’t a road at all, it’s a river - the mighty river Irrawaddy, to be precise, that cuts a broad swathe through the dry landscape bordering the city. But sad to say, Kipling was wrong. There are no flying fishes in the Irrawaddy. And although the sun might come up like thunder , China is certainly not 'crost the bay. Mandalay is land-locked, slap-bang in the middle of Burma. No sea, no bay, no China.

Plenty of water though. There’s the river, of course. And there are lakes. It was for a lake that we headed on our first day in Mandalay. The lake was , in fact, in Amarapura, an old Burmese capital (Burma changes capitals like HM changes hats).

As lakes go this one was not particularly special – not the biggest, or the deepest or the highest. In fact it appeared to be half-empty, having receded to reveal richly planted water meadows. Its claim to fame lies in the nineteenth century wooden bridge that snakes across it. Called the U-Bein bridge, after a mayor of Amarapura, it is, at 1.2 Km, said to be the longest teak bridge in the world. I was full of admiration for the Germans , who did not appear to notice (or at least kept quiet about) the similarity between U-Bein and O-Beine, which means bow-legs in German. Must be my warped sense of the ridiculous.

My initial reaction, on hearing that this bridge was on our itinerary, was conviction that this would turn out to be another hyped up ‘tourist trap’, something conjured out of nothing to draw the crowds. Undermining this thought was a niggle of doubt – the U-Bein bridge features on the cover of Amitav Ghosh’s wonderful novel, ‘The Glass Palace’. The picture is iconic, suggesting a scene of timeless beauty and deep tranquillity, but I airbrushed away the hope that it might reflect the reality, just as, I reasoned, the photographer must have airbrushed the photograph 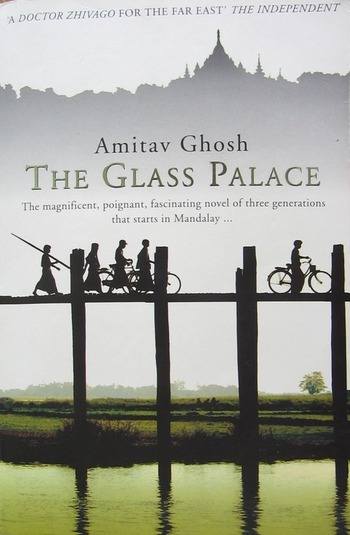 How wrong I was. The U-Bein bridge IS iconic, one of the most photogenic places I’ve ever seen. And it’s in constant use, not only by tourists. Girls in sarongs, monks and nuns, cyclists pushing their heavy old steeds, locals heading to the temple or to the market, and yes, traders touting to tourists, all pick their way across the slatted walkway high above the lake. It’s rather giddying up there, especially near the edge and I didn’t venture too far along it. Instead Pat and I walked through the water meadow to the lake edge and admired the bridge from below, and its romantic reflection in the water. As far as I was concerned it was love at first sight and an abiding gorgeous memory. 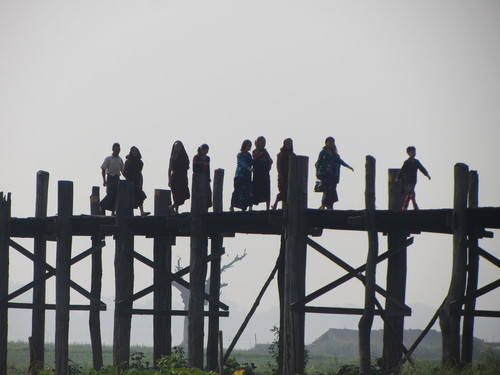 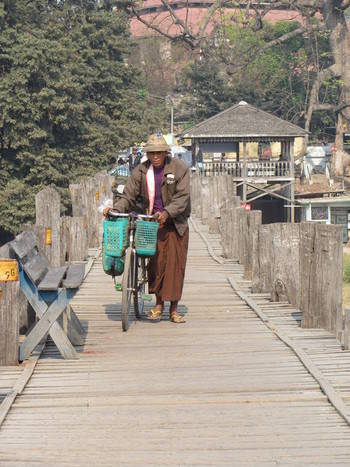 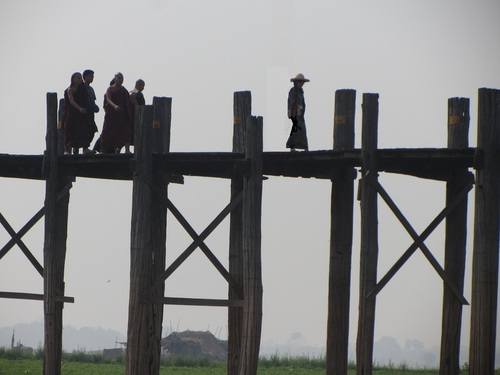 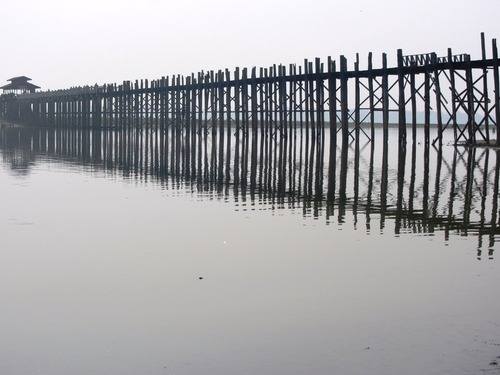 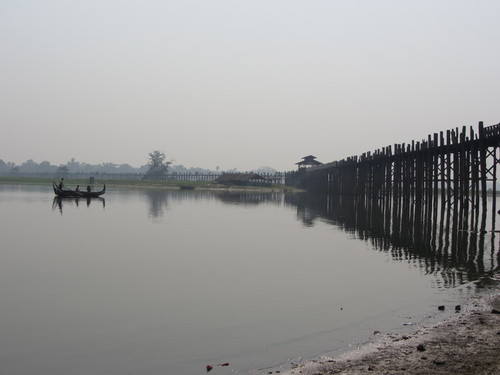 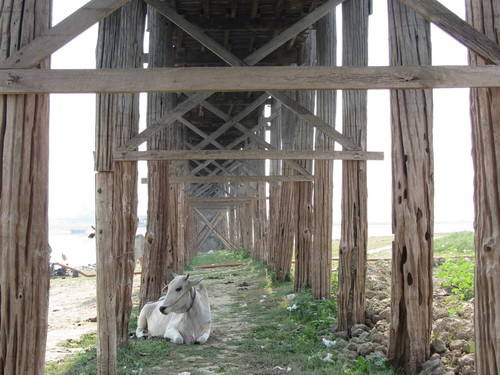 And to finish: forget those strict instructions not to cast your perfidious female eye on, let alone touch, any monks who might cross your path (and there are plenty). This young saintly one not only entlisted me to take a photograph of him on the bridge with a group of girls (including a German girl from our party), but then enlisted someone to take a photo of him with - Pat and Yours Truly! 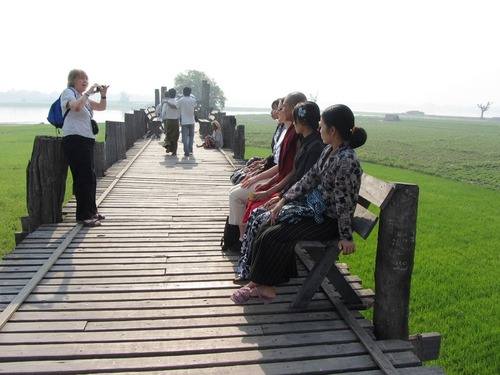 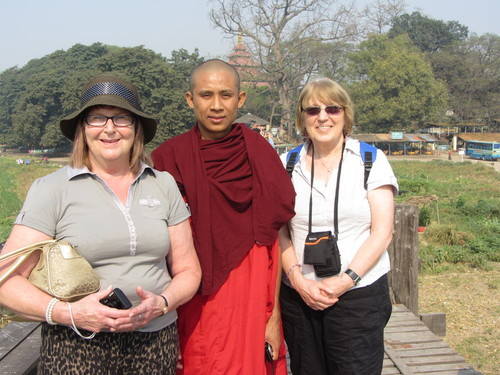