Falling flat on my face is something I’ve always excelled in. It runs in the family. My sister, like me, has a penchant for tripping over nothing, and has a new hip and patched up shoulder bones to show for it. My mum ended up with more metal parts in her ankles and elbows than R2D2. At least she had a reasonable explanation for her regular flirtation with the ground beneath her feet.  Well, some people might consider it reasonable. Mum loved dogs, particularly her friend’s  wopping great golden retrievers,  and they loved her back – so much so that they would come bounding across parkland and meadows to greet her. When they leapt up, she fell down.  Regularly.

I don’t really have any excuses. All I can say, is that when I fall, it tends to be dramatic: My first grown up fall was in New York, when, aged 22 and much to the bemusement  of my soon-to-be-husband, I nose-dived into the sidewalk as we headed for a night out in Greenwich Village.

Once, at home, I fell off the kitchen unit on which I was standing (don’t ask why). As I lay stunned and spread-eagled on the tiles my little daughter (yes, you, Joanna) rushed in with a colouring pad and did a quick sketch, which she called ’Mum is on the Floor’. 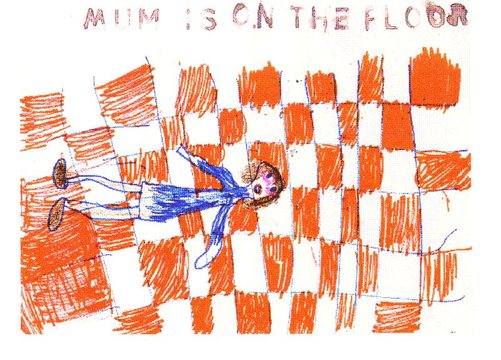 Most embarrassing fall? Down and out crossing the Epsom Road in Merrow, bringing the traffic from both directions screeching to a halt. Almost as embarrassing was the Park and Ride fall when I was about to get on the bus. Ouch, that gravel hurt my knees. Most damaging  fall? Hurtling into the metal barrier at Waterloo Underground station (Bakerloo Line) and breaking my arm into three pieces.

I fell down a mountain in India, under the scornful gaze of a troop of disbelieving monkeys. My tumble up the steps leading to the causeway over to Angkor Wat in Cambodia resulted in a gashed leg and an ankle the size of a football - with which I  had to wade through a river two days later. I’ve fallen over the pavement in Bangalore (that didn’t take much doing); on a boat going down the Rhine; down the stairs (twice); out of the bath (several times) and head-first down my son’s patio steps.

On this last occasion I turned the slipping on a banana-skin thing on its head: I was in fact, saved by a banana. The incident took place early in the morning before anyone else was up and I’d made the mistake of venturing into the garden to greet the chickens. Somehow I managed to crawl back into the house and collapse on a chair. But I felt consciousness being sucked out of me. In desperation I grabbed a banana (don’t ask me why, some instinct directed me). Within seconds of stuffing it down my throat,  I was back in control of my senses.

I had cause to be grateful to this last incident when I was in Burma. I have already hinted that the Burmese airports were… well, let’s say somewhat minimalist. After our wonderful stay on Inle Lake we headed back to Heho Airport for onward travel to Mandalay.  The airport was chaotic, not least because no-one, except our Burmese guide, could understand a word of the appalling announcements (made through a megaphone).  When she gave the word, we all jumped up and scrambled through the ‘gate’, ie the exit door to the runway, and headed in a crocodile-file across the tarmac to the waiting prop-engine plane.

It wasn’t far to the plane. Just far enough for disaster to strike. A friend in the group told me afterwards that he had managed to dodge the metal bar straddled across our path. He’d remarked to his wife that it was a liability - someone was sure to trip over it.

Somebody helped me up, not one of our group – thank heaven for small mercies none of them had seen my fall from grace. I staggered on towards the plane, struggling to stay conscious. Every part of me screamed with pain – blood spurted from my elbow, I knew that when I revealed my knees, hidden under trousers,  they would resemble steak tartare. Every step up the rattly little staircase onto the plane was like some sort of endurance test.  We did not have designated places.  Frantically hanging onto the last vestiges of consciousness I collapsed into a seat next to an elderly couple. The gods were on my side. They were members of our group: the genteel gentleman of 83 and his wife.  As my senses blurred into blankness I managed to blurt out that I had fallen. My neighbour took one look at me and called to a steward to bring water. ‘No,’ I managed to say, ‘Not water. Something sweet.’ I had remembered the banana.  The steward returned with a tray of sweets. Salvation.  The sugar worked to negate the shock, just as the banana had done. I survived the flight to Mandalay.

At Mandalay airport my plight became public knowledge, much to the horror of friends and the group leader. Frau G insisted on applying lashings of iodine to my elbow and knees. If you have never tried this – you have a treat in store… But I think it was probably worth the agony. In spite of several weeks of subsequent pain to my unfortunate bones and bruising that vied with David Hockney’s colour pallet, I avoided any nasty infections.

I would carry the consequences of my fall with me throughout the rest of the tour,  convinced that I’d also collected a couple of cracked ribs – no proof but, boy, did it hurt each time I took a breath.   At each turn I would encounter a challenge. Do I climb that mountain? Clamber into that old boat? Tackle those near vertical steps up a stupa?  I’d be continually testing myself and  I would pass each test, so determined was I not to miss out on any aspect of our time in Burma.

So I gritted my teeth and stifled my moans at Mandalay Airport as the iodine burned into my wounds.  Then we set out on the road to Mandalay. And a new chapter was set to begin.