When you visit a beautiful place and marvel at a strange and foreign culture, you are, of course, in danger of destroying it. I mulled this over as our four-person long boats ferried us through floating island gardens (not so ancient but still fascinating) and stilt villages. 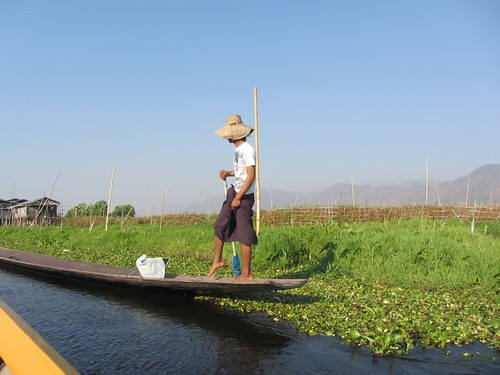 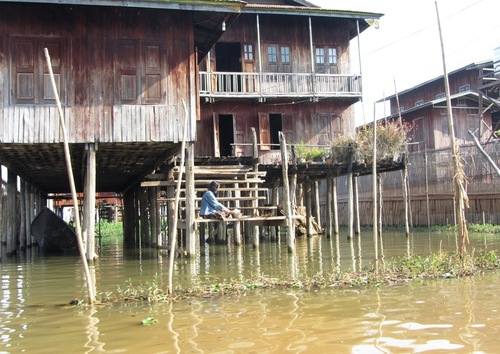 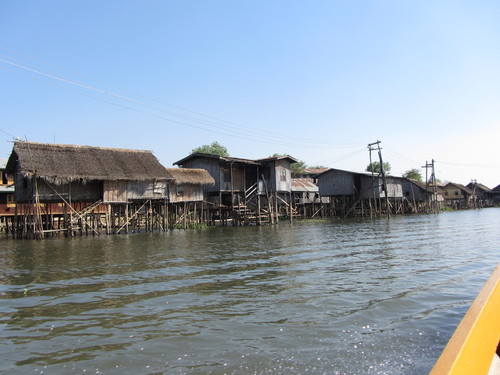 Some of the houses looked substantial, and, as I said in my last blog, it’s hard to assess the degree of poverty. However, it’s a fact of human nature that the urge to acquire the non-essential trappings of so-called progress  (entertainment, fashion, flash cars etc)  is unstoppable and the  right to access basic necessities (sanitation, food, medical facilities  and energy) is irrefutable.

However picturesque the life on Inle Lake may look to the outsider, it is probably a life of toil for minimal reward. Who can blame them therefore, for taking advantage to the current tourist boom in Burma and reaping the financial harvest?

One hopes that  that the money that is being poured into the area will benefit the 70,000 or so locals who live there. This,  of course, is by no means certain. But if the villages do get a decent share of the pickings, how much longer will they be prepared to tend their island gardens and row their fishing skiffs in the curious, one-legged  style that draws the punters?  I foresee a time, when the Inle floating gardens, quaint fishermen, and even the stilt villages in the lake, will be reduced to a few samples maintained as museum-pieces to draw the tourists in.

On the other hand, there are some ‘traditions’ that would probably not be missed by the onlooking world. I’ve already mentioned the fact that the lake is shrinking – due in part to the extension of floating gardens, but also to the vast canal complex that draws water from the lake for agriculture. Like all instances when man tries to interfere with rivers or lakes this could be the making of an environmental disaster – albeit a picturesque one. 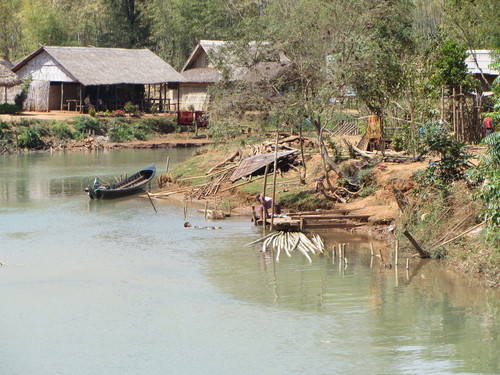 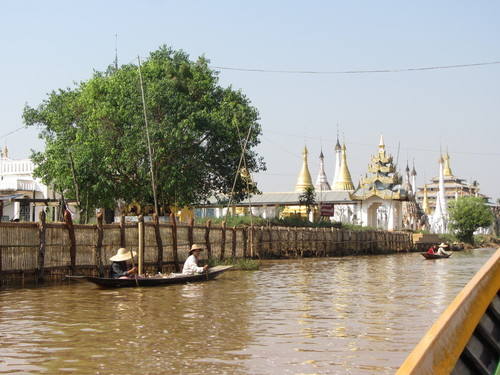 Another cause for concern is the slash and burn deforestation that is carried out in the hills by tribal people. The air often smells smoky and the fires are clearly visible. The tour guide was not too keen to discuss these other than saying that they were illegal but control was proving impossible. Apart from the harm they are doing to the forests, the resulting silt is washed down into the lake, clogging it up even further and encouraging damaging algae growth.  I also wondered about the regulation of  wood for housing (and hotels). Is there a quota of teak and other hardwood  for such use or is it a free for all? The answers were not clear cut.

Of course, where there are tourists, so-called ‘traditional crafts’ spring up and to my annoyance, as in China, part of our precious time on the lake was used up ‘visiting’ (I’d call it being herded to) romantic-looking little workshops built on stilts in the lake.

I  try to tell myself that it’s great that the people are innovative and who can blame them for wanting to sell to tourists? I understand this. It’s just the whole manner that rattles me. I feel that my worth to the host country is simply in terms of dollars.  And the traditional crafts are mainly not traditional at all. Some of them are new and  ingenious, such as manufacturing cloth from the stem of the lotus. 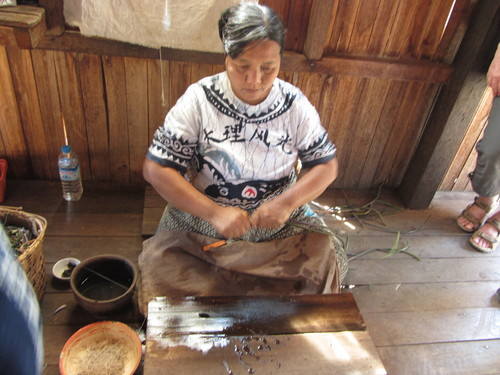 I found the resulting scarves, tablecloths and so on very rough and outrageously expensive, as were most ‘souvenirs’ in Burma.  Moreover, far from romantic, local vegetable dyes, a worker tried to impress the Germans by telling us that the colours they use in their silk and lotus stem products is imported from Germany. 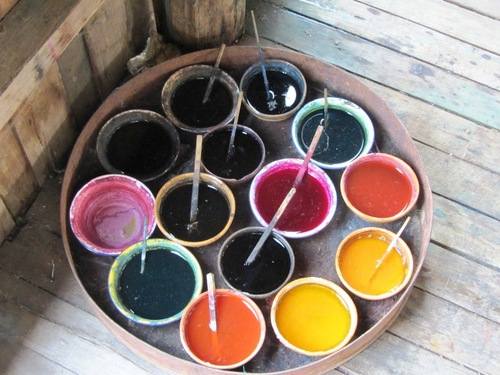 The other workshop visit was actually rather worrying. We were taken to another stilt-manufactory  to see a group of young girls making cheroots. This may be a traditional craft (cheroot-smoking is very much part of the Burmese culture, even among women), but it was quite distressing to watch girls who looked as young as 14 rolling tobacco into leaves. 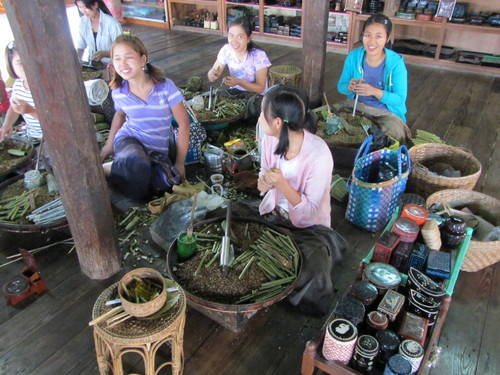 The only ‘craft’ visit that I really did enjoy was on the way back to Heho Airport when we journeyed on the Mandalay. We stopped at a ‘paper factory’, a hut by the side of the road where they make paper from mulberry bark and bougainvillea leaves – again, an innovation, not a tradition. But the way they conducted themselves and their business appealed to me (although apparently the roadside hut is just a front for a large factory elsewhere!)

For the first time in Burma I found something original, reasonably-priced and attractive, so I bought a few mulberry-paper lampshades. 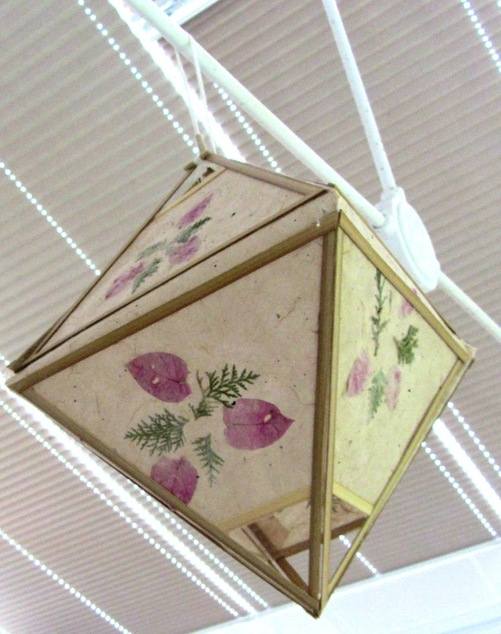 The same people also make traditional parasols and a very entertaining craftsman demonstrated how this was done. He also brought out a huge three-tiered red parasol and explained that Aung San Suu Kyi  would be visiting the workshop  next day and he would present her with this very parasol, which he had made for her.  This was the first inkling that wherever we travelled,  The Lady appeared to be one day behind us – she was also touring the country, as a run-up to the elections. 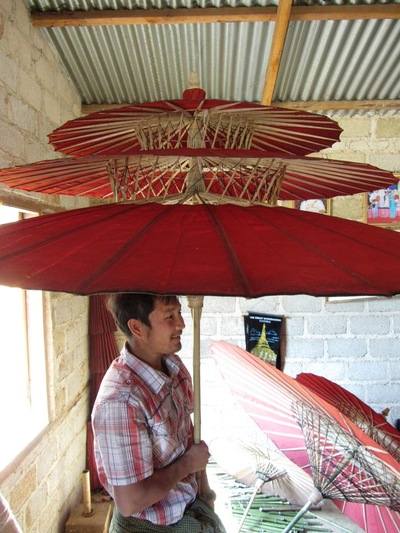 One day a few of us, armed with baby-clothes and make-up, decided to pay a visit to a small village near the hotel.  It seems that very few tourists ever leave the confines of their package programme, so we felt that this was relatively virgin territory. Here our gifts were graciously received, with huge smiles and no scrabbling and snatching at all. I gave this lady a colouring book for her granddaughter. 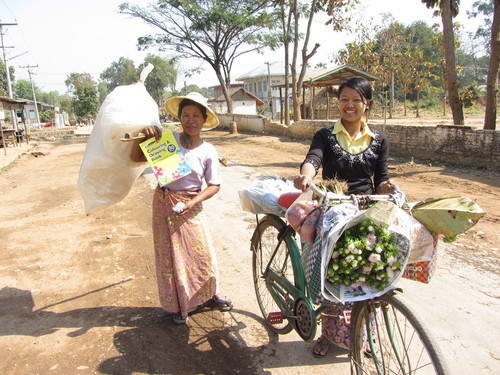 It was a pretty place, arranged, as always around its pagoda. Apart from the pagoda and a monastery, it  had an off-licence: 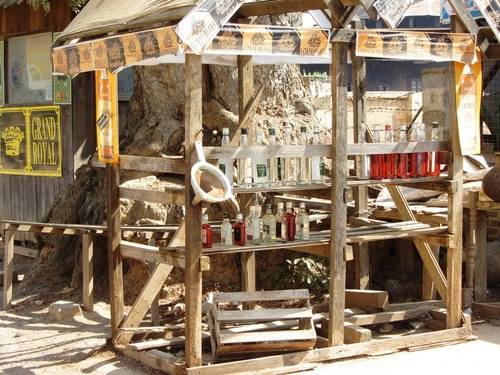 The houses, like many we saw all over Burma,  often had walls of bamboo matting, but looked sturdy and durable.  Agriculture was much in evidence, tractors rivalling  bullock power. No shortage of woman power, of course. 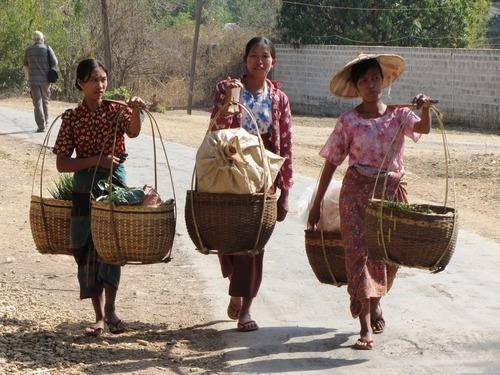 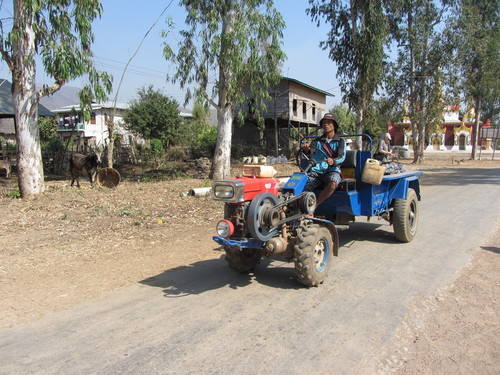 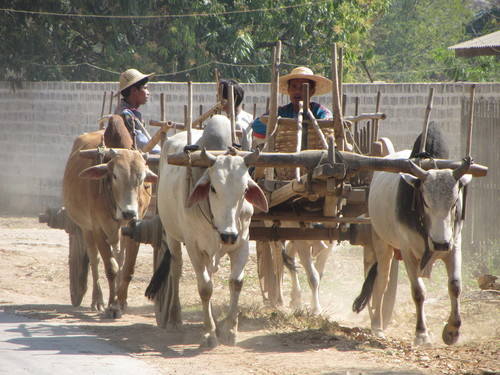 In front of the houses women sifted yellow beans or dried soya pieces that looked like the skin of the pigs grunting in cages beneath the houses. 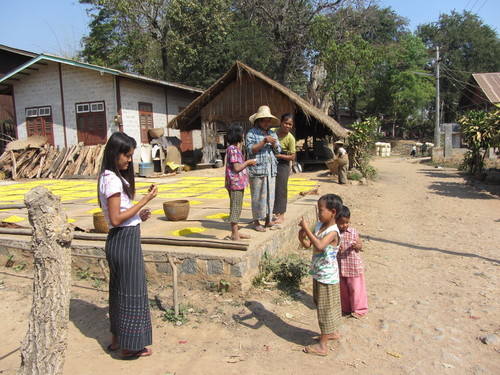 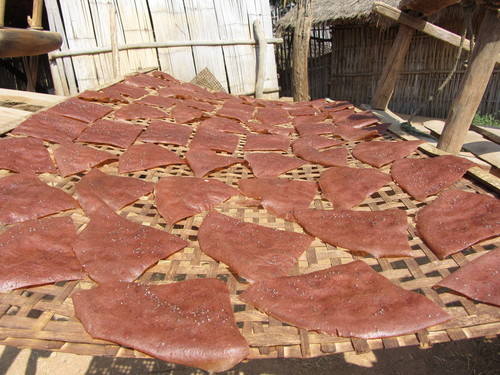 And of course, nat (spirit) houses  stood in front of every dwelling 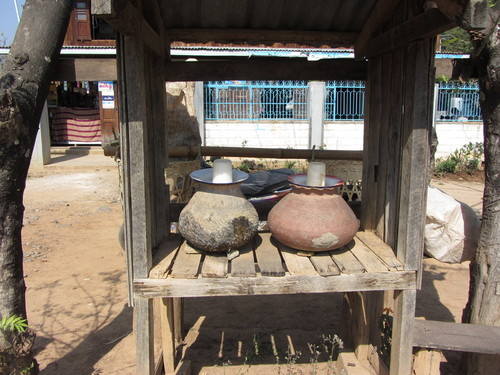 How poor are these people? I don’t know, but we saw at least one washing machine.  Okay, so it doesn’t make them rich, but by golly, what wouldn’t some Indian villagers give to have tractors and washing machines? 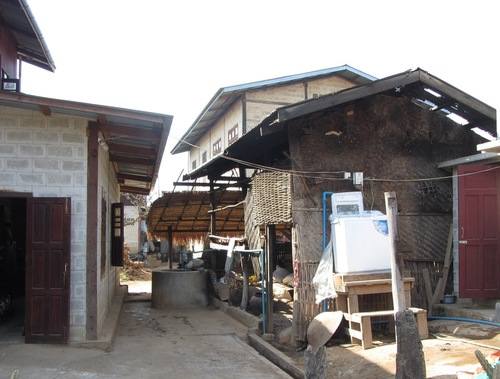 We saw absolutely no sign of fear or evidence of a repressive government. Perhaps we were only seeing what we were meant to see. But thereby hangs Burma’s dilemma. A land of many cultures, not all seeing eye to eye. A trip to the Karen regions of Burma, for instance, would, I am sure, have resulted in a very different perspective.

But before we leave Inle Lake, just a mention of two island temples we stopped at on our water-tour. The first had a shrine to five curious blobs: these, it seemed, were Buddhas, so covered in layers of gold leaf donated by the faithful, that the original sculptures are no longer visible. Notice the sign saying ‘no women must sully this sacred site’ (or words to that effect). Yes, the perception of women in Burma still leaves a lot to be desired… 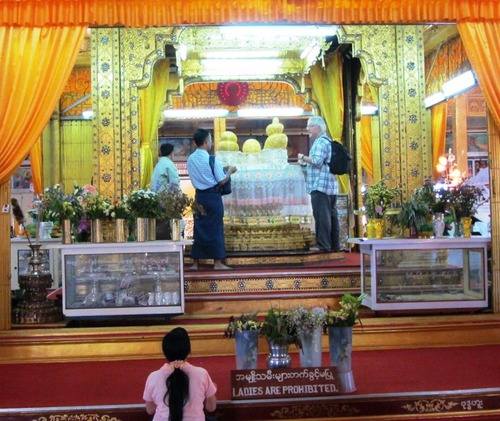 And to end with, a temple known as the ‘Jumping Cats Temple’. Why? Well it appears that some fifty years ago the bored monks taught the local cat population to jump through hoops. And they still do it. Quite hard to make out, but if you look carefully you will see the cat at the back is actually in midair – having just jumped through the girl’s hoop. 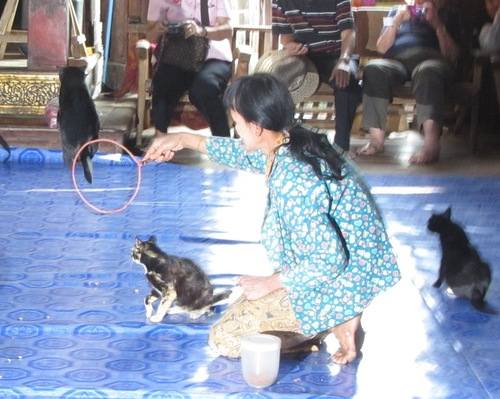