'It was a cold morning and an opaque fog had risen off the river. The king waited patiently for the sun to scorch away the mist. When it had thinned a little he raised his glasses. Suddenly, there it was; the sight he had longed to see all his life, the towering mass of the Shwe Dagon pagoda, larger even than he had imagined, its hti thrusting skywards, floating on a bed of mist and fog, shining in the light of the dawn.' 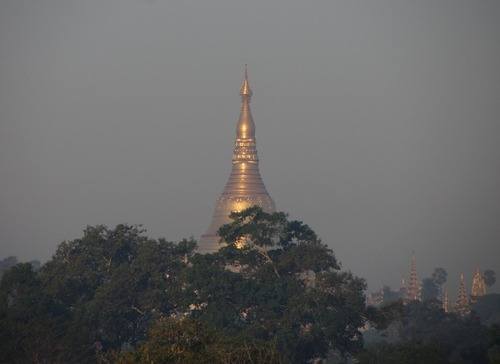 Dawn over the Shwe Dagon pagoda.

I felt rather sorry for the Germans. I had been in the Far East for 10 days by the time Pat and I joined their group in Bangkok at 6 am. Pat had been in Bangkok for three days. We were fully de-jet-lagged. The rest of the tour – 14 Germans, including the tour leader  – had that day made the 11-hour flight from Frankfurt. Still ahead of them was the ordeal-by-transit at Suvarnabhumi Airport in Bangkok, and another hour and a half to Mingaladon Airport in Burma: the airport that serves Rangoon – or to use the ugly modern name for the city – Yangon (I shall continue to indulge my romantic colonial-era fantasies by referring to it as Rangoon).

They were apparently made of strong stuff, in spite of the fact that the majority were, let’s say. ‘getting on’ in years. A morning arrival in Rangoon, an hour’s rest at the hotel and we were off to see, arguably, the most famous sight in Burma: the Shwe Dagon pagoda.

Our hotel incidentally, was quite impressive. It was certainly one of the biggest in Rangoon, and ostensibly one of the best. A fine foyer, pleasant rooms, an idyllic swimming pool edged by coconut palms (lit up at night). 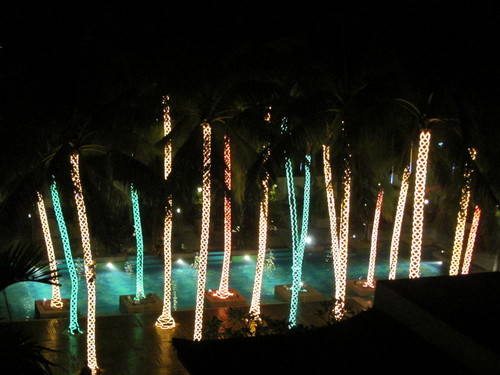 Swimming pool at the Chatrium Hotel

But dig beneath the surface and you find… wobbly wash basins, non-functioning sockets… and yes, nonexistent credit card facilities. There’s a long way to go. But that’s understandable. In fact, when we were met at Mingaladon airport by our Burmese guide, she started by issuing an apology in advance. During the last two months, she told us, since the lifting of oppressive measures, the visit of Hilary Clinton and the impending participation of ‘The Lady’ in the forthcoming bi-elections, the country had seen an unprecedented  increase in tourism and the infrastructure simply couldn’t cope. She begged us for understanding in the event of double-booked hotels and  restaurants and other unforeseen disasters. Nobody groaned or grimaced. She had our understanding. It was a gripping time to be in Burma. Worth the prospect of a night on the banks of the Irrawaddy or a tent by the sea shore and, looking around, I concluded that it would do none of us any harm to miss a meal or two.

Of course hotels in Burma have a few problems that we don't have to worry about in Britain. 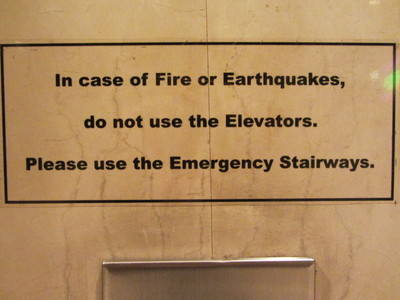 In Japan they drive on the left, a habit, apparently inherited from Samurai warriors who passed one another on the left to stop bumping swords. Sounds a bit dubious to me, but that’s what Wikipedia says, so who am I to cast doubts.

In Burma they drive on the right. The country imports its ancient buses from Japan. These are also used as tourist coaches. We got to know them well. The air conditioning’s not up to much but that’s okay. The main problem with them is that, being a right-hand drive vehicle,  the door opens on the road side. Thus every bus has to have a driver and an ‘assistant’ whose sole job appears to be to stand in the road, shielding the passengers from the traffic as they alight from and enter the bus.

Such a vehicle had fetched us from the airport and now here it was again, transporting us through the city to the Shwe Dagon.  Interestingly enough, the microphone at the front of the buses in Burma always worked perfectly, and out guide, Frau G, enlivened each journey with so many background facts that it was impossible to remember them all.  Frau G’s interesting monologues were in German, which gave me work to do as I had to translate the salient bits into English for Pat. At times Frau G consulted the Burmese guide, who only spoke English. This resulted in Frau G translating her responses into German and me translating them back into English.

The city traffic was heavy – also a recent phenomenon, though the cars were generally not new. Most of them were of the Far Eastern or Australian variety. Public transport – apart from taxis and the geriatric buses – consists of a kind of open-sided van with seats along the sides, which act as communal taxis – in Thailand they are called ‘Subaru’ (even if they’re not!). In Burma more people seem to travel on the outside than on the inside. Though apparently only the men. Paradoxically it seems that women are apt to be molested inside these vehicles, so wouldn’t it make more sense if they hung onto the outside instead? 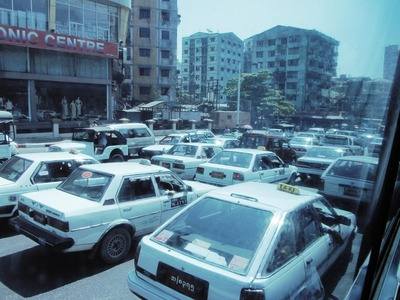 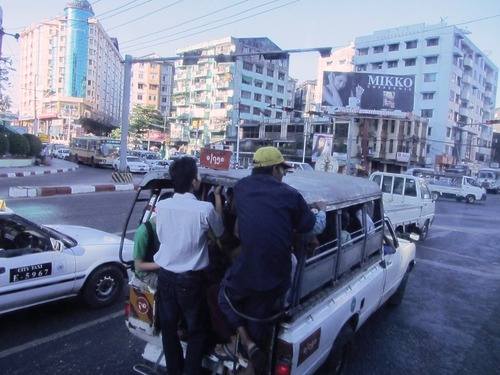 As the bus slipped past some office blocks wedged against colonial-era buildings, and shops advertising electronic goods, Frau G got us practising some essential Burmese expressions: Mingala ba (Hallo); Chezu ba (thank you); Thura may (goodbye) and of course the most important of all for the beer-drinkers in the  group Jama vasi (Cheers!)

The Shwe Dagon pagoda needs no lengthy explanation. If you want to know the historical stuff you can google it. I hope the pictures will speak for themselves though to be honest, no photograph can possibly express the impact that this remarkable place made on me.  Of course we picked a day when the long escalator that conducts you up to the courtyard from the western gateway was out of order (I wondered whether it ever actually works). We had to climb heavenwards on Shanks’s Pony. Ah well, nothing worthwhile is achieved without effort. 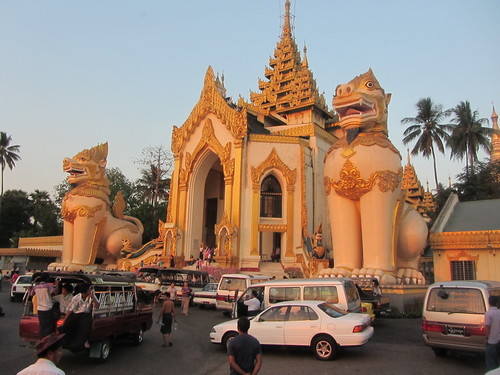 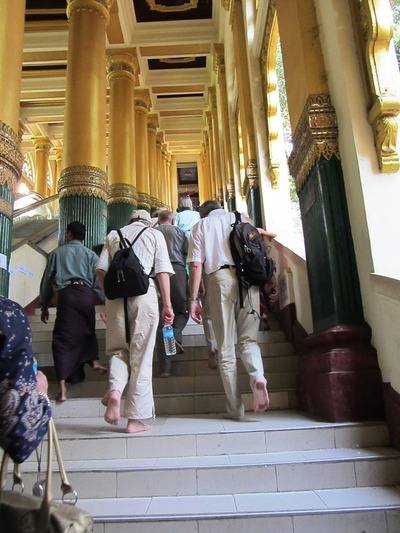 But what an auspicious time we had picked to be there! The annual Shwedagon Pagoda Festival was underway for the first time since it had been banned when the military had seized power in 1988. Presumably they feared law and order problems after Aung San Suu Kyi addressed a crowd of 500,000 in front of the pagoda in the same year.

I circumambulated the vast courtyard, taking in the myriad golden shrines devoted to Buddha and the Nats (Burmese spiritual figures) and gasping at the stupendous golden pagoda and the filigree temples clustered  around it. But mainly I simply stood or sat and watched the world go by: monks and Thai pilgrims offering flowers, families in their finery; and most spectacular of all procession after procession of parasol-bearing devotees, some bringing young novices to be initiated into monkhood. A never-ending, breath-taking, spectacular pageant, expressing a surge of optimism and joy and hope for the future. 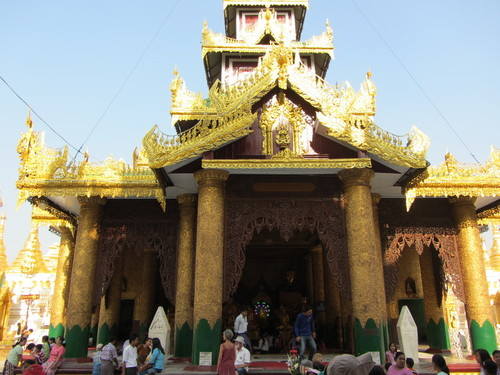 A temple in the Shwe Dagon Courtyard 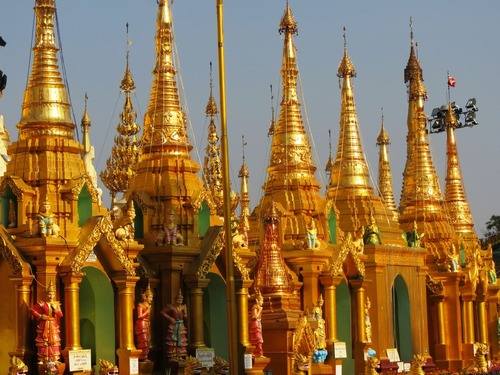 Some of the shrines surrounding the pagoda 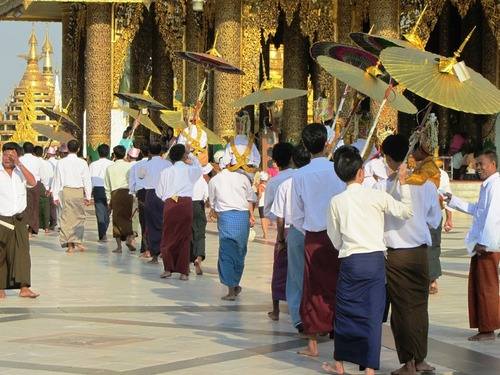 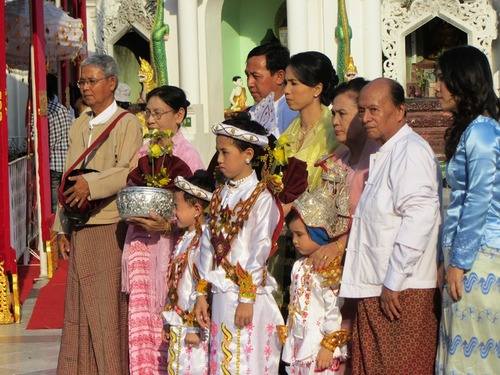 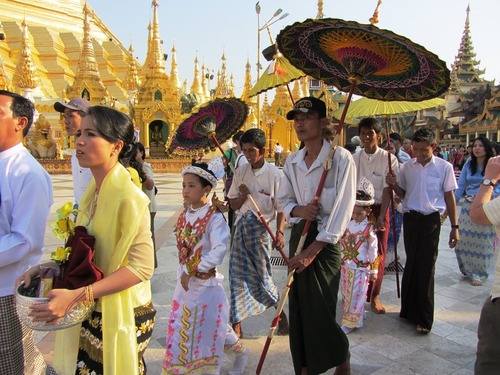 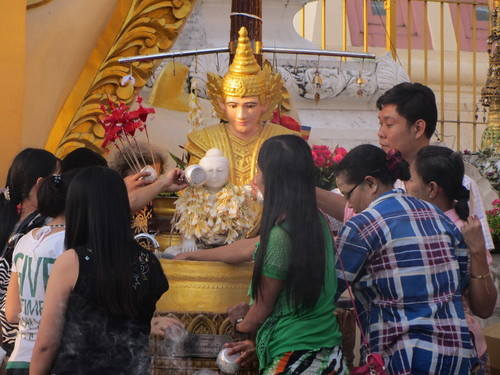 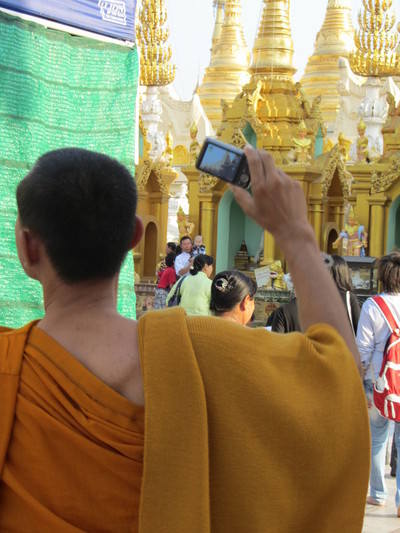 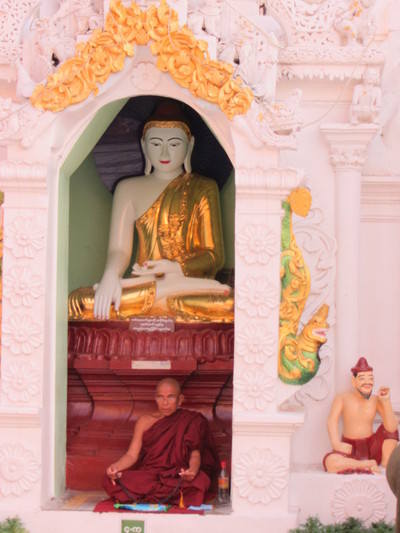 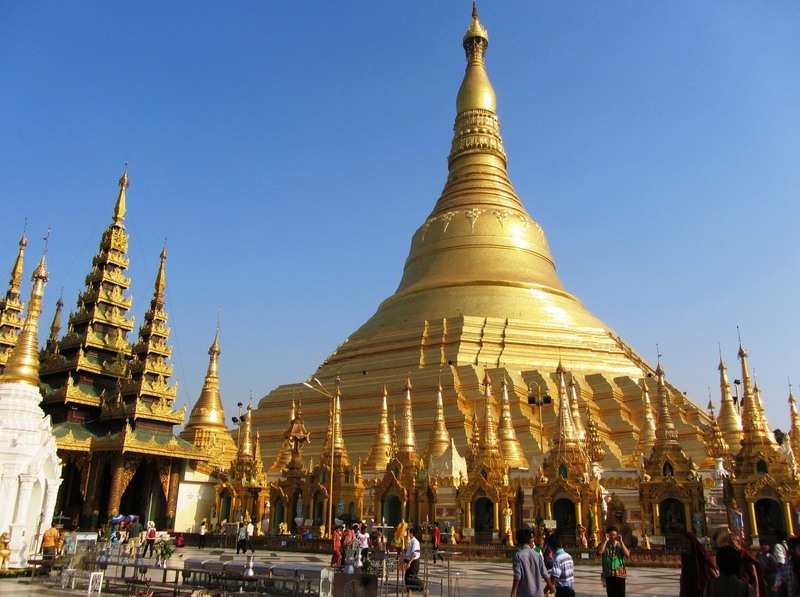