To quote a quote, we live ‘in interesting times’, and none more interesting than the past couple of days. With the election of ‘The Lady’ to the Burmese parliament on 1st April, it looks as if Burma may finally be coming in from the cold.

Signs of a sea-change could already be detected when I visited the country last month. But to start at the beginning…

In October 2011 I was invited to take part in a small, private German tour of Burma scheduled for early 2012.

It was tempting. The East had seduced me long ago. (If you've 'eard the East a-callin', you won't never 'eed naught else. No! you won't 'eed nothin' else but them spicy garlic smells, an' the sunshine an' the palm-trees an' the tinkly temple-bells…)

Burma evokes much in the collective psyche of the British people, myself included, notwithstanding the fact that my ancestors were not even British during the early twentieth century, when the romance of the East blossomed from the roots of British Empire. Who, among us, un-PC though it may be, is not transported to an idyll beyond our dreams by the old Moulmein pagoda lookin’ lazy at the sea? Some of us even aspire to be an Englishman (or woman) among the mad dogs in Rangoon in the heat of noon.

But whether or not to take up this opportunity required considerable soul-searching on my part.

Since General Ne Win seized power in the 1960s, we in Britain have been advised to avoid Burma like the plague. The infamous military dictatorship was undeniably one of the world’s most brutal regimes, committing frequent acts of atrocity and murder, particularly against ethnic minorities, implementing torture and rape as tools of control, denying freedom of speech and action, violating human rights and using forced labour and relocation of citizens on a large scale. In 1988 more than 3000 pro-democracy protesters were gunned down by the military and in 2007 the ‘saffron revolution’, a peaceful protest led by monks resulted in many victims, precise numbers undisclosed.

In March 2011 a nominally civilian government was installed under the leadership of General Thein Sein. However, elections in 2010 had already allocated 25% of the seats automatically to the ruling junta with most of the rest going to pro-government candidates. These elections were declared fraudulent by the National League for Democracy (NLD) and the international community.

Bowing to the inevitable, due largely to a to disastrous economic situation, Thein Sein’s government has, since his accession to power, implemented a series of reforms, including the relaxation of press censorship, new labour laws and the release of political prisoners, including NLD leader Aung San Suu Kyi (The Lady), who was under house arrest. Crucially this meant that she was allowed to and agreed to participate in the 1st April bi-election.  As we all now know, she triumphed in the election. However, since the junta has already got the majority of seats it will not propel the NLD into power. 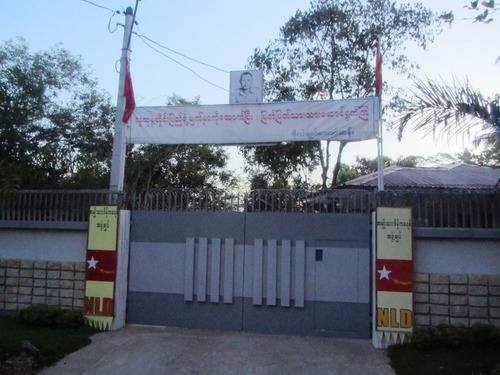 Gateway to  Aung San Suu Kyi's residence in Rangoon, HQ of the NLD. The NLD's flag is on the pillars : her father Aung San's portrait is over the gates

At the time  I was invited to join the tour, talk of Aung  San Suu Kyi’s participation in the bi-election was mere speculation.  But the loosening of the grip of dictatorship, endorsed by Aung San Suu Kyi and by the visit of Hilary Clinton in December 2012 had given the country new hope, or more accurately, had inspired the world community with new hope for Burma. Under these circumstances I had to make a decision – to go or not to go.

In 1989 my husband was asked to go on a work-related trip to South Africa, which was then still practising apartheid.  He consulted his cousin, anti-apartheid lawyer Joel Carlson, who acted for numerous anti-apartheid activists, including Nelson and Winnie Mandela. ‘Go,’ advised Joel. ‘If you have not been there, you cannot judge.’

I had always remembered this advice. It can backfire, of course. Some people skim through a country for a couple of weeks and consider themselves an expert. A little learning can indeed be a dangerous thing.  But the danger is averted if you are aware of this and approach your goal with the humility of a novice.

Bearing this in mind, and recognising that the NLD  had also changed its stance on tourism, now endorsing visits of individuals and small groups (though not large tours that benefit the government financially), I decided to go ahead.

Our tour leader assured me that the tour would be private, engage private guides, stay at privately owned hotels, fly with private internal airlines and as far as humanly possible, engage in no activity that puts money into the hands of the military junta.

She issued some strange and interesting advice:

(I  heard of at least one person who, having carefully folded her notes, then spent several hours carefully ironing them flat again.)

The first piece of advice proved to be absolutely true, as, to some extent, did the second – but more of that later.

The last gave me a few hours of panic.  I was first going to Hong Kong and Thailand, where I would need my phone. In anycase, if there was any chance of wi-fi in Burma, I would need it there too. I had heard that occasional hotels offer Internet connection.

On further investigation it turned out that the mobile phone ban advice was out of date. They could now be brought in, but to phone or text you needed a local sim card. That was fine. My family could manage without texts from me for a couple of weeks. And there was always the faint hope of wi-fi access…

My brush with the weird rules of the junta began right here in the UK. Travel to Burma requires a visa. An application form can be downloaded from the Internet along with instructions to send it, your passport and a cheque for £14 to the Myanmar Embassy.  Myanmar, incidentally, is the new name for Burma, instigated by the military junta and therefore pointedly rejected by the British Government, which prefers to refer to its former colony by its ‘British’ name. And I should jolly well think so, too.

I digress. I phoned up the embassy in January 2012 just to check the cheque situation. Yes, they confirmed, send all the documents including the cheque by Special Delivery, which I did.

A few days later an answerphone message from the embassy awaited me. Please send a postal order immediately as Royal Bank of Scotland cheques are unacceptable. Did they know something we didn’t? So Yours Truly ended up rushing to the embassy in London to hand over my postal order.  I watched with misgivings as the official inspected it and disappeared through a door. He came back without it and nodded. Thus I was dismissed, a shaking wreck. Would I ever see my passport again? Surely an embassy that thinks Scotland has seceded can’t be trusted to unite my postal order with my passport in some seedy backroom?  But a few days later it arrived complete with visa and the rejected cheque. We were due to depart next month - in February. And what could be better than waving England goodbye in the heart of winter?

I am sick o' wastin' leather on these gritty pavin'-stones,
An' the blasted Henglish drizzle wakes the fever in my bones…

I looked at the visa. A frisson of excitement ran through me. It was official. I was heading East once more.