I returned to Bangkok from Hong Kong, to meet up with a friend, who had flown in from Heathrow. Together we would spend two more full days with the Thai In-laws before we joined up with the Burma tour.

Ayutthaya: this was my third visit to the erstwhile capital of Thailand – around an hour north of Bangkok.  There’s always something new to see there and for my travelling companion  it was the first time, though not her first visit to Thailand.

Ayutthaya was created as the 2nd capital of the Kingdom of Siam in the 14th century, destroyed by the Burmese in the 18th century , the remains of its extensive wats (temples) and prangs (towers)  preserved as a UNESCO World Heritage site.  It takes its name from the Indian city of Ayodhya, birthplace of the legendary hero Rama, after whom the Thai kings are often named.

Located  at the confluence of the Chao Phraya, Lopburi and Pa Sak rivers, it was one of the cities worst affected by the 2011 floods, though water rolling down through the fields rather than the rivers was responsible for much of the flooding.

The In-laws had a treat in store for us: at a riverside restaurant, complete with sacred tree,  we spent a while deliberating and drinking fresh coconut water, while a sumptuous meal was organised and cooked, and then carried down to a large river boat.

So we chugged gently down the river, passing snapshot views  of ancient temple ruins, while we indulged in another wonderful meal. In Thailand food is taken very seriously. It has to be perfect, abundant and frequent. Seafood is number 1 on the menu,. Thai food explodes the senses with a unique blend of flavours and spices. And it always looks like a work of art. 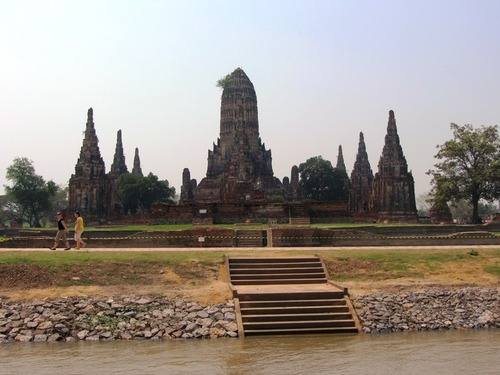 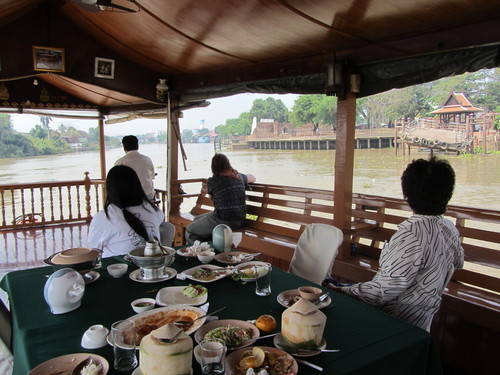 When at last we docked back at the restaurant, replete with beautiful food and breathtaking sights, we dodged the ubiquitous  tourist-bearing elephants and wandered around the ruins of Wat Phra Ram. 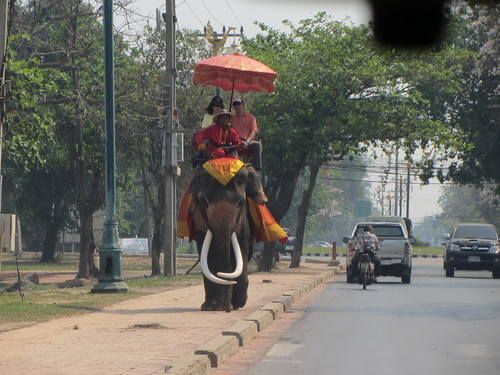 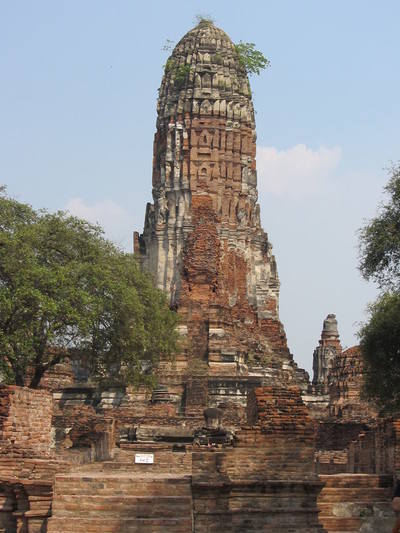 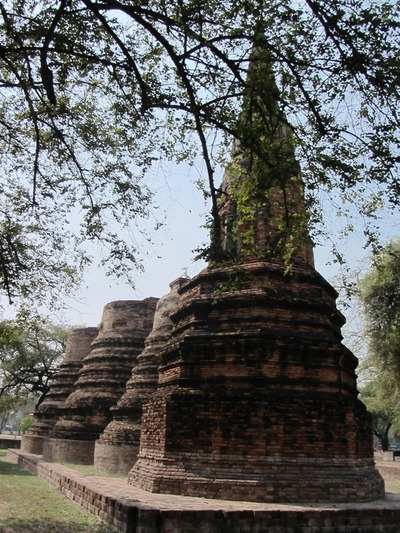 We also paid our respects to the massive 12.45m golden Buddha at Wat Phra Mongkhon Bophit. The Buddha is old, from the early Ayutthaya period, the temple built around it is modern, replacing a crumbling earlier version. 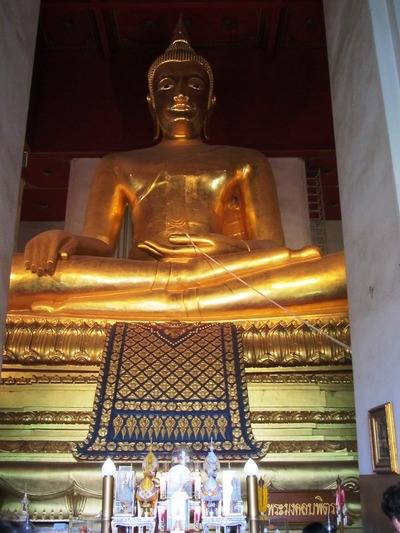 By this time the heat and humidity were overwhelming and we staggered back to the car.

The evening was rounded off back in Bangkok where yet another fabulous meal awaited us in Chinatown.

Next day we were driven to Pattaya Beach. The In-laws have friends who own some of the upmarket hotels far from the maddening crowds.  Knowing that we liked swimming, arrangements had been made for us to enjoy the facilities at a rather grand hotel : including a room for us to change in and swimming in the wonderful sea off the private beach. Afterwards we went to the floating market, which, while unashamedly touristy, is very picturesque and lots of fun.  Food, naturally, figured high on the list of attractions throughout the day. 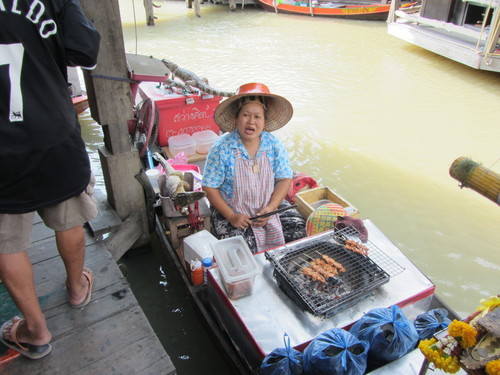 I was sorry to leave Bangkok the next day, though not sorry to see the last of Suvarnabhumi Airport’s appalling immigration and security arrangements. The new, high tech airport should make getting through it a doddle. Unfortunately long queues and chaos make a mockery of the modern design.