This wasn’t exactly how I expected the day to start. Not that I was complaining, it all just seemed somewhat surreal.

We were on our way to Masada, legendary Herodian fortress on the edge of the Dead Sea. A day trip from Jerusalem. I’d asked our tour guide to try and find someone else to come along and share the costs. He had succeeded in finding a fourth person, a elderly American complete with kippah on his head and tzitzis (prayer tassels) hanging from his waist. Let’s call him Manny.

Manny professed his devoutness by requesting a diversion to an extraordinary place set deep in the Judean Hills. Well actually, the address was Jerusalem, and we hadn’t travelled far from the city, but to all intents and purposes it was a few old shacks in the middle of a sandy, deserted nowhereland. 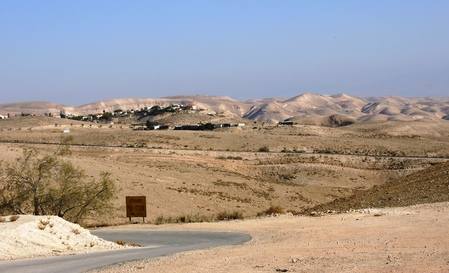 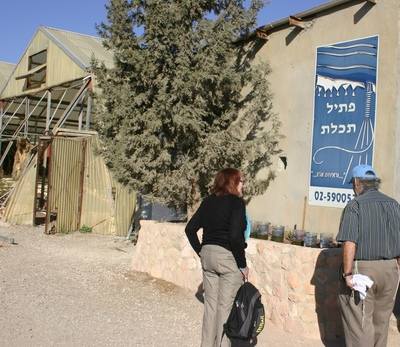 Incredibly I’d heard of the bizarre goings-on at this place. Don’t ask me how. Must have been a documentary on television some eons ago. At any rate actually coming face-to-face with it was like some sort of weird dream. Let me explain. It’s all to do with something mentioned in the Hebrew Bible and Talmudic writings of the ancients: some sort of royal blue colour favoured by the aristocracy and high priesthood and any well-heeled devotee who could afford to have a blue tassel woven into his tzitzis. The writings referred to this blue as ‘techeiles’.  It was known to have been manufactured from some sort of sea creature called a chilazon, described as a snail. However, the exact source of the dye was lost when the Jews were driven out of Israel in the first century CE. The significance of it, however, stayed fresh across the centuries. Even the blue of the Israeli flag is said to symbolise it.

Why a whole battery of twentieth century scientists and professors should decide to devote their careers to rediscovering this ‘techeiles’ defies the imagination. It’s one of those peculiar foibles of the human mind. The only thing I can say in defence of such a pursuit, is that any intellectual enquiry or research may throw up something useful – in this case possibly more useful than simply a formula for a religiously-motivated colour. Whether it has or not I don’t know, but our visit to the huts in the desert was certainly fascinating. First we watched a film (bizarre – watching a film in a scruffy little room on a tatty screen in a dusty shack). It showed how scientists had traced the source of the blue dye to a sea snail Murex trunculus. It extolled the virtues of the dye, which comes from  gland in the snail and, unlike vegetable dyes, does not, apparently, fade. However, unless it is exposed to the sun’s heat it remains purple. This discovery was, apparently, of great significance. Pat and I winced as the film showed a poor snail being bashed by a hammer. Give me woad any time.

We inspected the snails in their aquaria (very uninspiring creatures – looked like rocks) and watched the young assistant winding the techeiles tassels into Manny’s tzitzis. 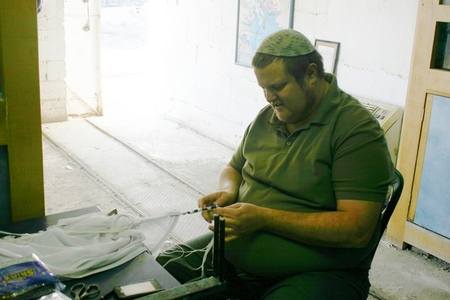 It was certainly a most odd and oddly-entertaining start to the day. You can read more about it here www.tekhelet.com 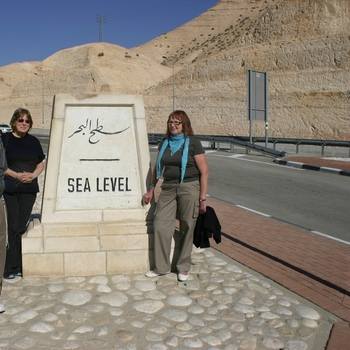 Next stop, after a spectacular drive winding through the Judean Hills, was a viewpoint from which we could only gasp at the sight of St George’s Monastery clinging to the cliffside of Wadi Qelt. The earliest parts dating from 6th century but mainly reconstructed in 1901, it is home to Greek Orthodox monks. A new road apparently makes access to it easier, but has caused contention as it was built by the Israelis across the West Bank. The monks are philosophical - to quote journalist Matt Beynon Rees: The people who travel the new road are more important than the authority that built it. If only the politicians could adopt this view… 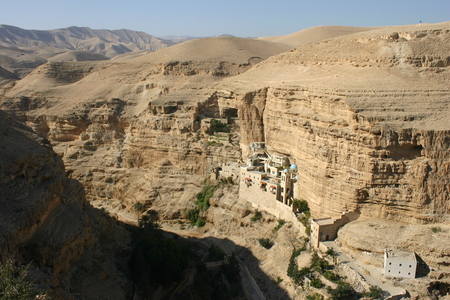 We descended to 423 meters below sea level to reach the Dead Sea. Not dead yet, but if the countries of the region keep diverting Jordan River water from it, it will inevitably disappear. Alarming sink holes are appearing and plans to replenish it with desalinated Red Sea water seem spurious to say the least. Near the oasis of Ein Gedi (where I bathed almost 50 years ago) we left the West Bank and rejoined Israel. 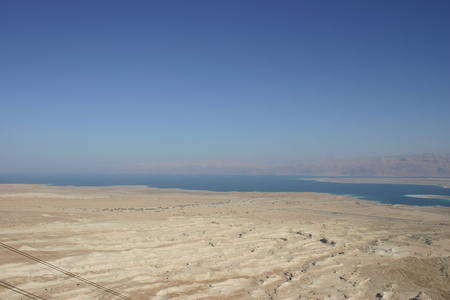 The scenery here is spectacular, layer upon layer of sandy slopes that look as nothing could live in them. But these are not true desert and I spotted a couple of ibex confirming that there is, indeed, life in them there hills.

Soon we reached the phenomenal hill-fortress of Masada built around 30 BCE by Herod the Great. In the year 70 CE a group of Jewish zealots fled to the fortress from Jerusalem after the destruction of the Second Temple. What happened next is steeped in myth, since the only account is from one Josephus, a Jewish soldier  in the Roman army. He appears to have been a dubious character with his own agenda, so his account must be taken with a dose of  scepticism. According to Josephus, when the Roman Army laid siege to Masada and finally broke into the fortress in 73 CE by means of a massive ramp and a battering ram, all they found, as the consequence of a suicide pact,  were the corpses of the 960 men, women and children who had taken refuge there.  There is, however, no archaeological evidence for this at present. 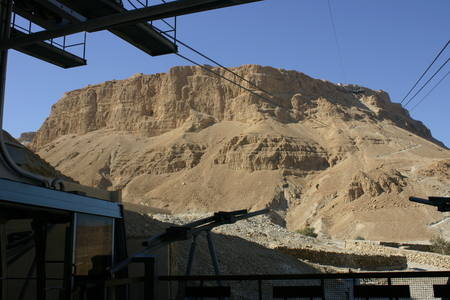 Whatever the truth may be, Masada is an evocative and stunning place, and until the capture of the old city of Jerusalem, acted as a kind of symbol for the State of Israel. We took the cable car to the top and wandered around the ruins, accompanied by a strong wind and flocks of Tristram’s Grackles, a kind of starling with flashy chestnut wings. 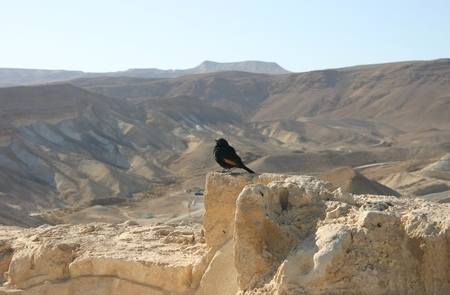 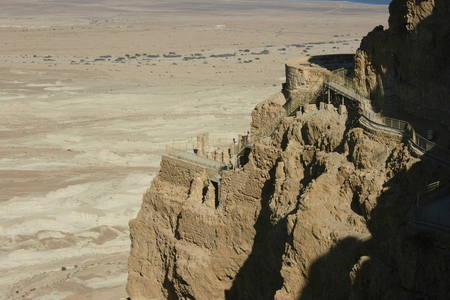 We spent an idyllic afternoon lounging in a pool built over a hot sulphuric spring, laden with ‘healing’ minerals. It was certainly hot and it felt divine. Could have stayed there all evening, but our guide had other plans. ‘How do you fancy dinner in Jericho?’ he asked.

Now Jericho would not have been the first place to enter my head as a venue for a leisurely evening’s sojourn. It lies in the totally Palestinian-administered Area A of the West Bank and has attracted violence and political unrest during the years following the Second Intifada (Palestinian Uprising) after 2001. However, not wanting to appear chicken, we found ourselves greeting the suggestion with a great deal more enthusiasm than deep-down, I at least, felt.

A last look at the setting sun’s glow on the Jordanian hills across the water and we headed off, skirting the cliffs of Qumran, where the Dead Sea Scrolls were discovered in the mid-twentieth century. 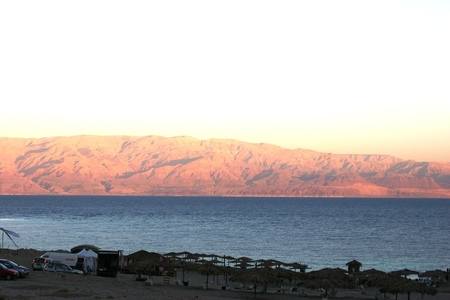 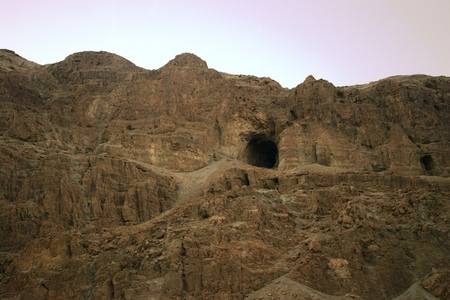 By the time we reached Jericho it was dark. We parked on the town square, which was crowded with vehicles and shoppers. As we walked to the restaurant on the corner, we were practically dragged into yet another bakery by the delighted owner, keen to show off his pitta-making prowess to rare visitors from the west. 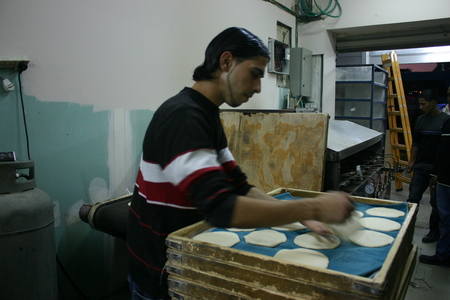 The restaurant owner greeted our guide with copious hugs. We trooped upstairs and out onto the balcony overlooking the square. 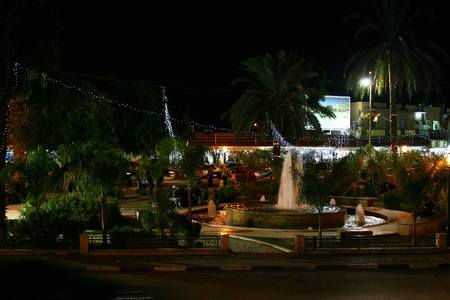 Here we were treated to another feast of Arabian delights – wonderful mezzes, piles of pitta and meat or fish. There were only two fish left but since I don’t eat lamb, I managed to lay claim to one of them. Manny opted for the lamb, though he could have had the other fish. It’s halal, he muttered unconvincingly. Hm. Is that the same as kosher? Probably yes to us ordinary folk but methinks Manny’s rabbi would disagree. Manny’s eating habits somehow didn’t sit well with his quest for techeiles. But each to his own… 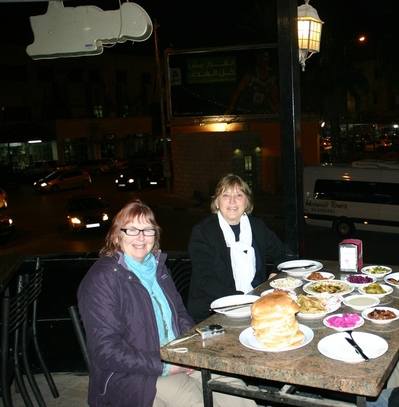 Afterwards we walked around the pretty square and I was once more dragged into a shop – this time a greengrocer, who practically strong-armed me into buying half a kilo of dates. They didn’t look a patch on the succulent ones I’d seen on Carmel Market in Tel Aviv, but they tasted good.

We drove back to Jerusalem with no problems, just waved through the border by an Israeli guard.  It had, to put it mildly,  been a day to remember.