It was something of an eye-opener to find out that Jerusalem has 763,800 inhabitants but Tel Aviv only has 404,400. Jerusalem, for all its charisma, seemed to me to be so much more provincial that sexy, vibrant Tel Aviv with its designer shops, designer houses and designer eateries and sleeperies. One of the smartest streets is the broad Boulevard Rothschild, lined with Bauhaus buildings and restaurants, and with a central, tree-lined walkway. We  got to know it well, as we were staying nearby.  Here and there we encountered small groups of black African men, leaning against railings, drawing on a fag, simply standing around. These were, apparently, refugees from Dafur in Sudan. They’d come via Egypt, crossing the border illegally into Israel, just as other refugees cross from France into the UK.  Like Britain, Israel is regarded as the promised land for these desperate people. Here’s what Naomi Scheinerman has to say in the Jewish Virtual Library.

The Hotline for Migrant Workers says 17,000 African refugees have entered Israel via the Egyptian border since 2006, including 5,000 Sudanese migrants, 3,000 of whom were Christians who settled in Israel. Currently about 1,200 Darfuris live in Israel with about 500 in Tel Aviv and the rest primarily working on kibbutzim in the South and in hotels in Eilat. Those who found lives in on kibbutzim and in hotels in Eilat find themselves happier than those in Tel Aviv, where jobs are scarce and living conditions harsh. A rundown bomb shelter across from the central bus station in Tel Aviv has become a home for many Africans until they can find work or proper housing. After granting refugees asylum, the Israeli government’s efforts to help the integration of Africans into society was minimal. Instead, Israeli charities, churches, synagogues, legal and medial aid organizations, and the Tel Aviv municipality lend a large hand.

The southern end of Boulevard Rothschild leads to Neve Tzedek, one of the first developed parts of the city. There’s also a craft market near here on Fridays and if you keep walking you’ll end up at Carmel Market, whose narrow alleyways buzz with shops of all sorts, from fruit and vegetable stalls, to clothes to cheap souvenirs (much cheaper than the craft market and the posh boutiques in Neve Tzedek but possibly all made in China). 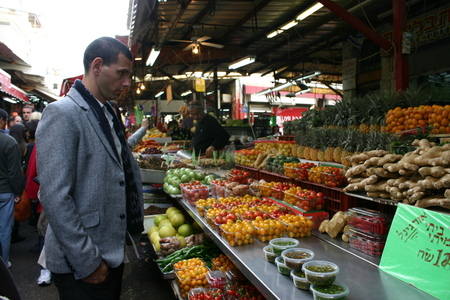 Beyond, you can head for the beach – windy and wild in December, but with a great view of Tel Aviv’s skyscrapers to the north and the old Arab port of Jaffa to the south. Here, on the empty, windswept promenade, Pat, my travelling companion, and I were all alone. Who else ventures out to the beach in the bleak mid winter? 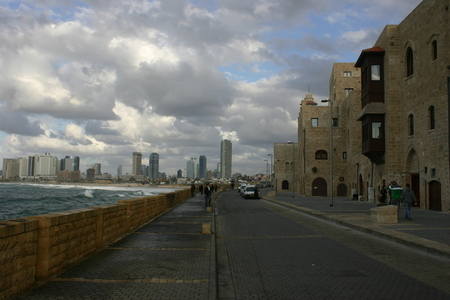 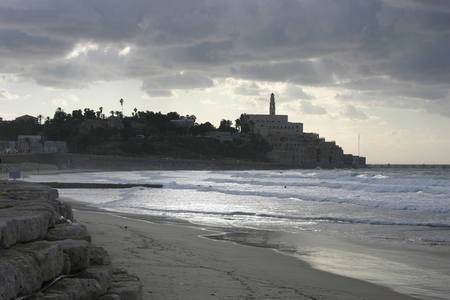 Cue for a surreal experience. A couple materialised out of the darkening gloom of the afternoon. We stared at one another for an uncomprehending moment to make sure no-one was hallucinating. No mistake. There with her husband stood a friend from  Haslemere – an ex-colleague from the Language Department at Glebelands.

Once we’d stopped screaming we all headed into Jaffa together. In no time we  were chatting away as if there had been nothing extraordinary about our meeting.

Jaffa has become something of an artists’ quarter, beautifully restored, perhaps a little too clinical. It’s still very picturesque but to me Jaffa will always mean oranges. Jaffas were the mainstay of my childhood winter fruit fix. Sadly the orchards have dwindled as water becomes an issue and manufacturing takes over. 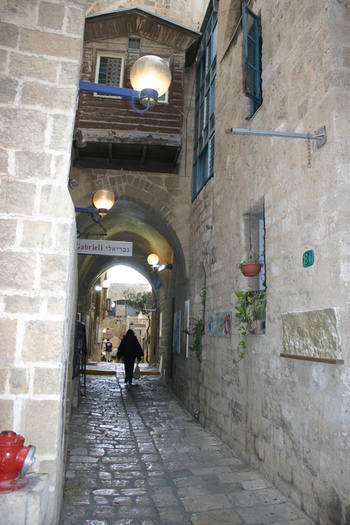 Something unusual – at least in the eyes of anyone we mentioned it to in Israel: one day we took a taxi and headed north towards Netanya and then east towards the West Bank border. Our destination: a moshav called Gan Yoshiya (a moshav is an agricultural cooperative similar to a kibbutz, but less communal…)

In this unlikely place a young couple (she British, he Israeli) run a sanctuary for mistreated donkeys. It’s called ‘Safe Haven for Donkeys in the Holyland’. Pat had promised her daughter, who works with horses, to look them up, and so we did.  Donkeys are regarded as expendable commodities in communities worldwide where they constitute the labour force, to be used and abused till they drop. English Lucy and her husband devote their lives to rescuing these maligned and gentle animals from cruelty, ignorance and abandonment. You can check them out on their website here  Most, but not all of their rescued charges seem to have come from the West Bank, including from around Qalqilya, a politically sensitive town on the West Bank border,  ‘the darkest place I have come across’ is how Lucy, in her newsletter,  describes this Hamas-led, volatile town, almost surrounded by the Israeli-built wall. Here Safe Haven has set up an fortnightly clinic and a rest haven for mistreated donkeys.

At Gan Yoshiya, we were warmly welcomed and given a tour of the premises and the then 159 donkeys and some horses residing there (now, no doubt there are still more, since new donkeys appear to arrive daily). Some of the sights were shocking: Burnie the donkey who had been set alight by a group of boys three years previously – now he looks healthy and happy:  except that there is no fur on a large part of his body, just tight, burnt skin. Several donkeys had lost limbs. We were amazed that they managed so well on three legs. There were new borns too. 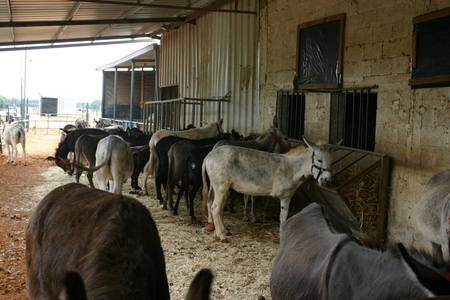 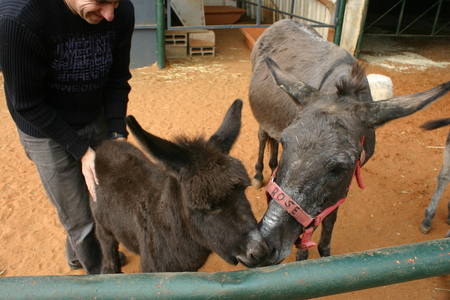 The charity is funded solely on donations. Land is a huge problem since this maltreatment of donkeys appears to be a never-ending story. As always the British are rallying round, Say what you like of us, we are a charitable nation, not least when it comes to alleviating the suffering of animals. Like CUPA, the charity in India I support, Safe Haven is keen to educate the owners to look after their animals.

The taxi driver (through an interpreter at the Donkey Sanctuary) offered to take us to a kibbutz to see a bakery. Why not? We thought. Could be interesting. The kibbutz, Yad Hanna, is even nearer the West Bank border. Actually I’m not sure whether the place still qualifies as a kibbutz – Wikipedia calls it ‘a former kibbutz’ but what do they know? Whatever – it was a desolate place with quantities of run-down huts and some large warehouse-type buildings. It was to one of these that we were headed. The driver ushered us inside this unpromising-looking place – and sure enough, it did indeed house a full-blown bakery. What was more, the owner spoke some English and explained that it was a Yemenite bakery and the taxi driver was her brother. We were introduced to her daughters, both of whom worked there, and then taken for a full-blown tour of the place with demonstrations of the dough-kneader, the bun-cutter and other mechanised wonders. Then we were seated in a little run-down office and fed on Melawach, a kind of delicious fried layered flatbread and a dead ringer for parathas. 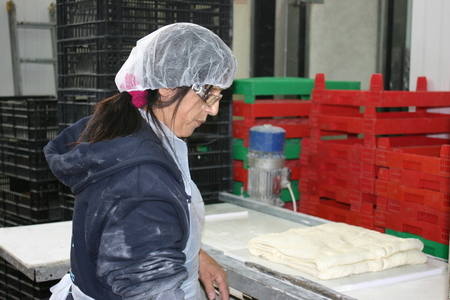 All Jews who live in Israel are Zionists and believe in the state of Israel, right? Wrong. Hereby hangs another paradoxical tale. There are pockets of ultra-orthodox Jews, notably those living in a 19th century quarter of Jerusalem called Mea Shearim, who not only disapprove of the state, but regard it as anathema to all they believe in. Put simply: it is only with the coming of the Messiah that Israel will once again come into existence. Those who took it into their own hands to recreate the state of Israel committed a crime against the Almighty. There are plenty of signs to this effect in Mea Sherim, some of which are too offensive for me to post, but here’s one that reads: ‘Jerusalem is the capital of undivided Palestine’. 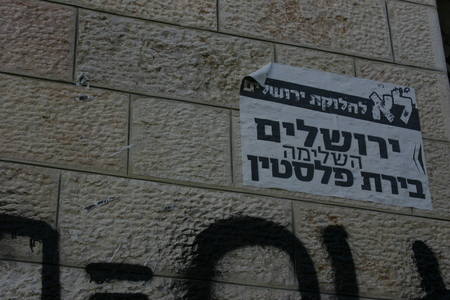 Mea Shearim is a shabby area, reminding me of AM Forster’s expression in  ‘A Passage to India.’ ‘The very wood seems made of mud…’ 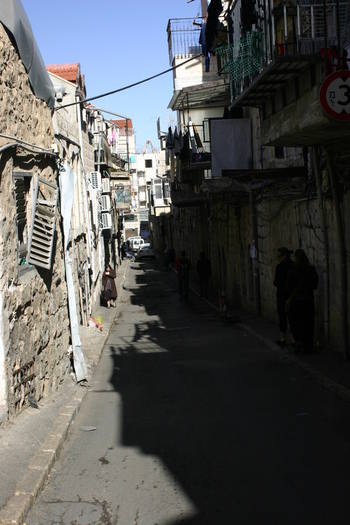 Taking note of the billboards prominently displayed at the entry points to the area I had qualms about walking into it but our tour guide said it would be fine. Still, I felt intrusive. 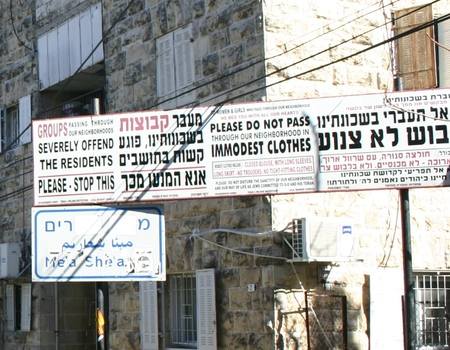 I avoided photographing the inhabitants in their 18th century-style garments from the shtetls of Eastern Europe. The men, bearded with flying sideburns and enormous fur shtreimel hats, long black or striped coats,  identical shoes on each foot (no left or right) , the women in long sleeves, high necklines, calf-length skirts over thick dark stockings, the heads of the married women undoubtedly shaven, then maybe covered with a wig (sheitel) and an all-enveloping head-scarf. Our guide tried to take a picture down a typical street and four schoolgirls turned away and faced the wall.

Some people in Israel are more afraid of a population-explosion from the ultra-orthodox than they are of  the Palestinian question. Now there’s food for thought.