Try my Noontide Owls Quiz: match the 12 extracts with 12 of the illustrations from the novel.. 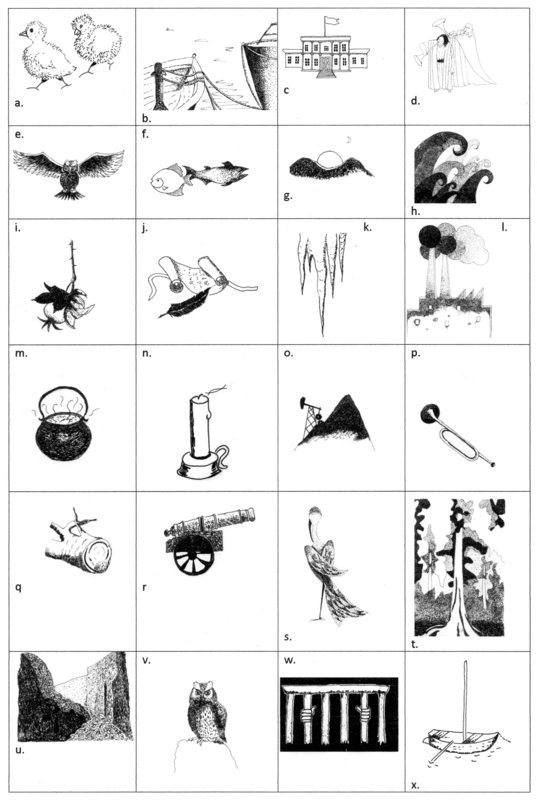 1. He unrolled the parchment and after an instant’s scarcely perceptible hesitation, he passed it to Selme, who took it with trembling hands, sensing the honour that was being bestowed upon her by the simple gesture of being allowed to handle the precious document.She passed her hand over the smooth, but somehow delicate, material. It was thin like cloth and yet stiff like leather.

Aban smiled. ‘Paper. We make it from rags and water.’

‘Oh no. It would tear in no time and fall to pieces in the rain. We use it to write on. Look. That is writing.’

2. In unison, they stood to welcome the sunrise. As the first rays cast a golden halo around distant hills, they began to play. Undiminished by the rough, grey robes that covered them, Arolan and Elin stood tall and radiant against the milk-white morning sky. Watched only by a black owl perched on a pile of rocks, their trumpets rang out a song of freedom and the passing of the Dark Age. The sun burst forth to warm the freezing land.

3. ‘Did I dream it?’ Maara turned from the window as she addressed her uncle. But he slept on, unaware that she had returned. Unaware, probably, that she had even been away.

Then she decided to do what she always did, when she felt alone and confused. She slipped back out of the cottage and made her way to the quay. There she wandered along the deserted jetties to a small sailboat hidden amongst the Mariners’ fishing boats, away from the eyes of the Conquerors. Her uncle had made it for her when times were less harsh and there was wood to spare.

4. By the first evening of freedom the fleet was ready to sail. Heeding the words of Elin, they loaded only the small nets, discarding the larger ones, to allow the stocks to replenish.

Sing your ancestral chants so that the Sea Spirit will know that you are free, Elin had told them, and their hearts had been lifted by his words. Now men and women gathered on the shore, and stood with heads bowed, lapis eyes closed and hair luminous in the cold evening light, like threads of silver gossamer. The words of their sacred incantations had been lost in the annals of time, but they could still pray. Together they prayed that Vasa, the Spirit of the Sea, grant them full nets and a safe return.

Curkas glanced around. ‘But where is she?’ For the first time, he noticed that of the forty who had set out with him from the Silent Sea only thirty-nine stood before him on the sand. The Wise One was not among them.

Panic seized him. ‘She is missing,’ he cried. ‘She is still in the sand. Dig! Dig! We must rescue the Wise One.’

Melan laid a hand on Curkas’s shoulder. ‘There is nothing left to dig, my friend. Besides, the Wise One is not missing.’ He looked up to the sky where the wood-owl hovered, trembling and shimmering in the sunlight.

The bird gave another cackle, so loud that it echoed around the heavens. Then she swooped down low over the cowering watchers and with a flick of her wings she was gone.

6. ‘Psst!’ Maara saw Aome jolt with astonishment and wheel around, looking for the source of the sound.

‘Psst! Aome! In here!’ Cautiously, and with a look of absolute terror on her face, Aome peered into the cannon.

Aome slowly straightened up and leant her back against the cannon with as nonchalant an air as she could muster. ‘Maara, child!’ she said. ‘Go home. This is no place for you to be.’

‘I’ve been cooped up in this thing all afternoon. But I have to find out what’s going on.’

7. The chasm was a place of even greater terror, the realm of Gorgola, Vasa’s eldest daughter. Kera had told Elin in hushed tones that in ancient times, even Mariners were forbidden to sail into Weeping Wound Chasm. She spoke of a hundred Mariner boats smashed to smithereens, and a thousand lives sucked down to the Kingdom of Mile Deep, there to be married to Gorgola to satisfy her endless lust for mortal souls. Those who displeased her, Kera said, Gorgola turned into barnacles, where they clung screaming to the rocks that lined Weeping Wound Chasm, until at length they were pounded into nothing by the angry sea.

8. ‘I reached the forest edge and plunged in among the trees before I had a chance to change my mind. Immediately darkness overwhelmed me. I bumped against the prickly tree-trunks as I tried to feel my way along. Gradually my eyes became accustomed to the darkness and I began to make out tall shadows of trees standing shoulder to shoulder like a frozen wooden army waiting for the order to attack. Sentinels for Blor I thought, and shuddered.

‘There was scarcely room to squeeze myself between them. The forest was silent, save for my feet snapping the fallen twigs and cones. Each time a twig broke, the echo seemed to reverberate a hundred times around me, carrying a message to Blor, so that it was certain that the monster was able to follow my progress with ease. I knew he lay waiting in the depths for the moment to pounce.

9. As he stood watching he thought he saw a movement above him on the cliff face. Impossible, he decided. But he kept looking. Yes, something was up there. And getting bigger, descending the vertical drop by means of invisible footholds. At first Elin focused on the two grey, sturdy legs that brought it miraculously and effortlessly closer. So smooth was its descent that it almost looked as it were being lowered on a rope. Then all at once the whole creature. Could it be? He could hardly believe what he was seeing. A huge grey bird with a long beak, glittering turquoise eyes, purple-grey wings and a strong, wide tail. So that was it. The mystery of the skull was solved.

10. As she neared the bush, she could see that these rosehips were enormous - much larger than the blossoms seemed to justify. They too were blue, but a translucent aquamarine that seemed to shine and sparkle as she approached.

She reached out her hand to pick one. It was difficult to prise it from the branch, but she finally succeeded. It fitted neatly into the palm of her hand. She found that it was much heavier than its size warranted, indeed she felt that one was all she could carry down the hill and back to the encampment.

Somehow, she sensed that this was a special prize she had wrested from the forest, and returned to the camp half running, half walking, half hoping, half praying, but somehow confident.

11. From somewhere ahead came moaning. Aome stepped towards it, holding out the candle. Another moan. Then she made out eyes, staring at her from a skeletal face. Next to it, another figure. And a third - three bodies slumped against the rock wall. There was little to distinguish one from another, except that the first was bigger than the other two.

She moved closer, the two men following behind. Gingerly, she crouched down, her face inches away from the biggest of the three spectres. No sound came from it. It did not appear to be breathing. When she held up her candle to the eyes, they did not blink, but, although dulled they were not without colour.

12. The forest was dark and silent. She shivered, and drew closer to Featherbrow. She stroked the bird’s neck. ‘We have to get to Elin. If only I knew which direction to take.’

The cormora cocked her head, as if she had understood. Then she raised her beak and gave a loud screech.

‘You know the way, don’t you?’ Maara said, her heart beating a little faster.

As if in answer, the cormora lowered her ladder-wing: a clear invitation for Maara to clamber up once more onto her downy back.

With Maara safely aboard Featherbrow began to stride towards the rays of the morning sun glinting through the trees, the chicks hurrying after her.