Arriving exhausted in the early evening in Phonsavannh (or Phonsavan)) after an 8-hour journey across the mountains, it was a bit daunting to be driven straight to the MAG (Mines Advisory Group) centre to be told that we had been booked into a 50-minute film, “Bombies”, about the effects of unexploded ordnance (UXO).  However, the film turned out to be riveting, horrifying, and should be compulsory viewing. You can watch it here. https://www.youtube.com/watch?v=6HPH7grVHR0

For me one of the most chilling facts to emerge from the film was that the US dropped more bombs on Laos than they did on Germany and Japan together during the whole of World War Two, making Laos the most heavily bombed country in the world. And this in spite of the US signing the 1962 Geneva Agreement in which they pledged to uphold Lao neutrality and non-interference. However, the CIA harnessed the support of Hmong villagers to wage battle in what is known as ‘the Secret War’ against the Communist Pathet Lao in the north (particularly the Xieng Khuoang district where we were) and the Ho Chi Minh Trail in the south (the Vietnamese of course, having also violated the Agreement by constructing this supply route).

The MAG Centre in Phonsavannh 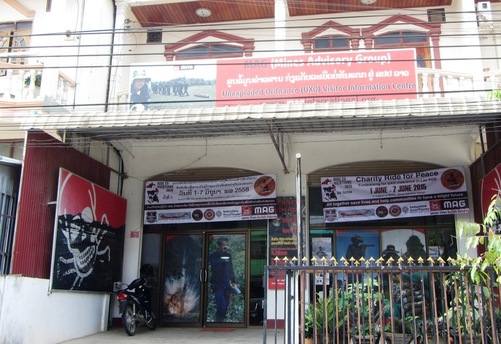 The following, annotated from the MAG website gives some idea of the work of MAG and the situation in Laos.

MAG was set up in 1989, by two brothers in the north of England after witnessing the suffering to civilians caused by landmines and unexploded ordnance in Afghanistan. Later Princess Diana developed close ties with MAG, which focused world attention on the problem of UXO.

MAG states that ‘More than two million tons (1.8 billion kg) of bombs were dropped on Laos during the Vietnam War between 1964 and 1973, including over 270 million submunitions (also known as "bombies"). [NB Bombies are cluster bombs, each containing 300 ball-bearings primed to explode on impact]. Up to 30 percent failed to explode, remaining ‘live’ in the ground after the end of the war, but there is no reliable estimate of the extent of contamination remaining.

By the end of 2012, there had been at least 50,000 casualties (including 29,000 deaths) from incidents involving this unexploded ordnance (UXO). All 17 of the country’s provinces and around a quarter of all villages still suffer from UXO contamination. 80 per cent of people in affected areas are still using land that they know or suspect to be contaminated with deadly explosives.

The presence of UXO is also a major cause of poverty, preventing people from using land and denying access to basic services such as healthcare and education. Forty-one out of the 45 poorest districts in Laos are affected by UXO contamination.

MAG became the first international humanitarian mine action organisation to start working in Laos in 1994.

The film we watched highlighted the issues raised above and showed the work of MAG and some of its partners in action.  There has also been a focus on building teams of female bomb disposal squads, thus improving the status of women in the villages.

The cafe opposite the MAG Centre calls itself Craters and its decor is self-explanatory. The hotel we stayed in, The Hillside Residence, also made a decorative feature of various items of ordnance. 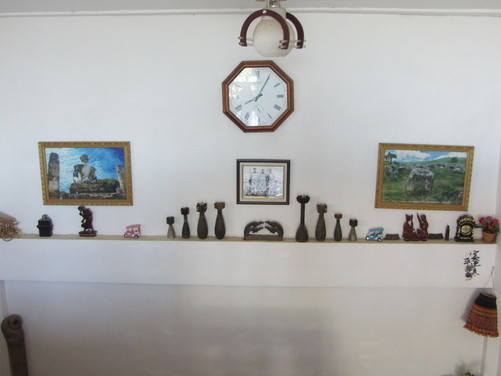 The hotel must have been a rather grand house once; not so grand now, though the proprietor was very friendly.  I can honestly say, that even after a strenuous journey and a traumatic film, I hardly slept a wink because of the night-time chorus that assaled my ears. Firstly came the delightful tokay gecko. He woke up the gangs of marauding, squabbling dogs who spent the night fighting over the contents of the town’s dustbins. They were finally shut up at about 3 am by a retinue of crowing cockerels that went on till I could stand it no longer and got up at about 6 am. Luckily the day to follow was so interesting that I didn’t nod off at all.